We all know why. It’s because so many legacy media executives are like migratory birds.  They tend to fly in one direction, following “the leader” – a behaviour that results in them putting all their eggs into one basket at the expense of everything else. Sorry for being blunt.

Subscription-based paid content is just one tactic in a comprehensive business strategy. Unfortunately, too many publishers don’t see it as a tactic; they view it as the strategy.

Pivoting to subscriptions is a move born, not out of consideration for target audiences, but purely out of desperation and a compulsion to self-medicate with whatever prescription worked for the leader.

Everyone knows that self-medicating is a danger to one’s personal health and the same is true in business. Tactics that work for NYT, WSJ, FT, and WP (no need to spell them out) may, in fact often, do more harm than good for the rest of the industry.

***Nikolay Malyarov will be at the Digital Innovators’ Summit to speak about changes in consumer behaviour in using and paying for content. Join Nikolay an many other digital media innovators in Berlin, 18-20 March. Book by 12 March to avoid late registration fees.***

After 15 years of training audiences that content is free on the web, a slap in their face with a fee that subsidises dismal digital ad revenue isn’t going to create trust, loyalty, or a value proposition with people averse to paying. You can’t just tell readers to suddenly change their behaviour cold turkey because you couldn’t make your other revenue models work. Where’s the value proposition for them in this pivot? How do you expect to grow engagement and trust with them if you treat them like cogs in your revenue wheel?

Now, there is nothing fundamentally wrong with charging for quality content. We’ve been doing it since 2003 when everyone else was giving news away for free. We just don’t believe readers should necessarily be the ones to pay for it, especially when consumer-centric organisations like libraries, hotels, airlines, cruise ships and telecom operators are ready, willing, and able to sponsor access on their behalf.

When business models change in other industries, consumers have a choice. If my cable company decides to change the rates on the package I purchased, I can choose to disconnect my service and cherry pick the shows I like elsewhere. Many people are already doing that because they can now buy a subscription to a single TV network (e.g. HBO) – something they couldn’t do before. They can also get other TV content for free on YouTube or through more affordable aggregators like Netflix. Legacy media is no different.

Look at the data – past and present

But it didn’t take long before many newspapers started tearing those paywalls down because they generated very little revenue and alienated readers. It was estimated at the time that only one per cent of revenue was generated by paywalls in the US.

So why pivot now?

According to Reuters, in 2017, as a result of the Trump Bump, eight per cent of US consumers had an ongoing subscription to online news; another eight per cent paid for that content in other forms (e.g. donations, one-off payments). 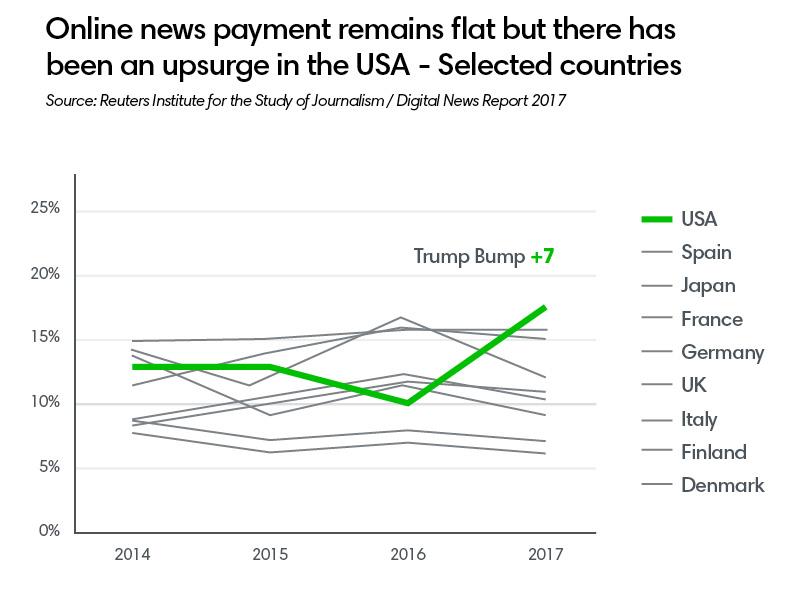 Compare that 16 per cent to the nine per cent Reuters reported in 2016 and that seems pretty impressive.

But let’s not get overly excited about this anomaly, because that’s what it is. The US presidential election did generate a subscription surge for the “usual suspects” – The New York Times, The Washington Post, Los Angeles Times, and Wall Street Journal, etc. But the rest of the country’s 1,000+ newspapers saw circulation revenue – both print and digital – continue to fall.

As I was struggling to make sense with this latest pivot, I recalled American Press Institute’s (API) Q1 2017 Media Insight Project study which surveyed 2,199 adults over the age of 18 (representing the 50 US states and District of Columbia) to determine who subscribes to news and why. The results were surprising. 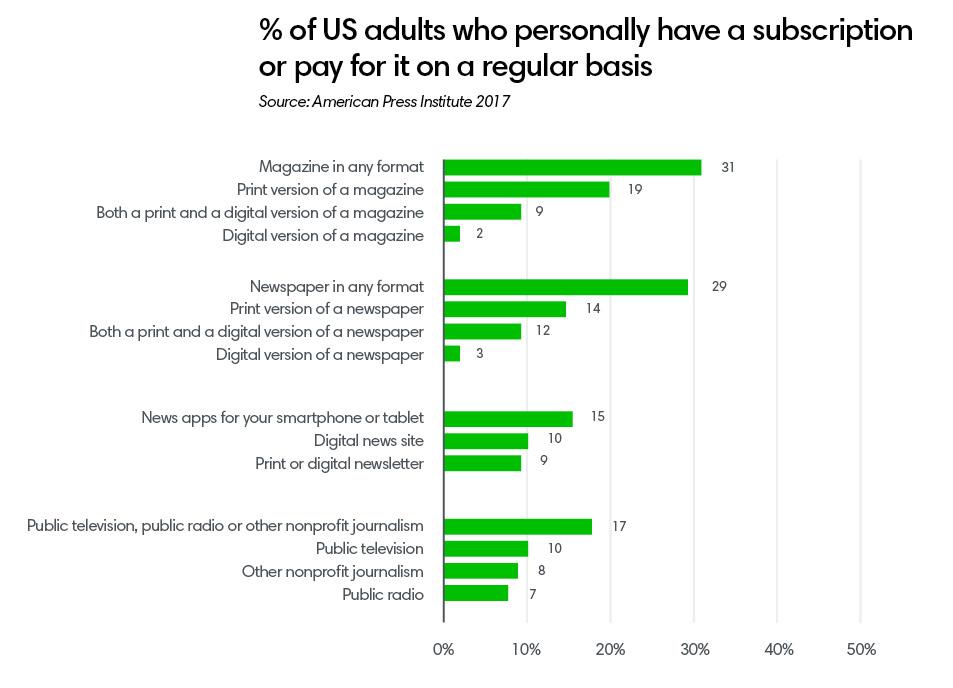 The study was performed between February 16 and March 20, 2017, when the country was still bumping about the election. In fact, 27 per cent of those who did subscribe, actually purchased their subscription “within the last year.” Coincidence? I think not.

Without more current subscription data, it’s hard to know where the industry stands today in terms of who’s paying and who’s not, but we are already starting to see a waning of the Trump Bump. Even the NYT is feeling it. 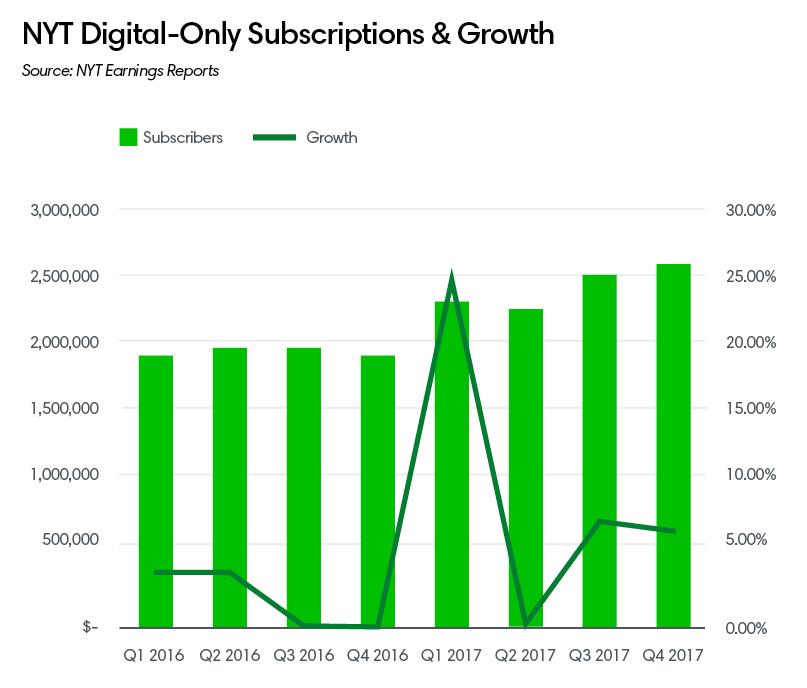 Bumps aren’t sustainable; they’re just blips on the radar. So instead of holding on to the false hope that digital subscriptions will remain high or even grow, consider these three hard truths and start planning a future around them instead.

Truth No. 1: Subscriptions are just another way to say ‘paywall’

It’s been proven time and time again that unless you offer something no one else has (unique content, entertainment, experiences, etc.), you can’t count on subscription revenue alone to save you.

Why? Because too many media companies live in the highly-competitive “general news” category – over-commoditised content that carries zero value by the sheer nature of it being propagated by so many others. Just take a look at the WAN-IFRA 2017 Outlook report and it will become painfully clear that the general news herd needs to be culled. 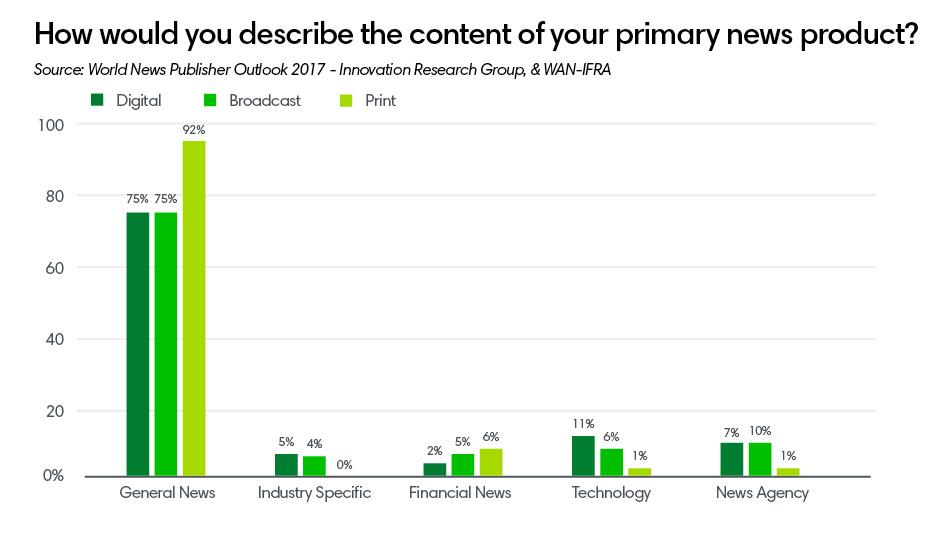 General news publications that offer nothing exclusive are just drips in a firehose of worthless information. The future of publishing really is a “differentiate or die” scenario. Which leads us to Truth No.2.

Back in 1992, Bruce Springsteen released a song, “57 Channels (and nothing on)”. It spoke volumes about the lack of value most of TV stations were bringing to America.

At that time, print publishers pretty much owned the attention of their communities and the money that came with their monopoly. It worked for everyone because publishers provided a service their readers couldn’t easily get anywhere else. But today, with all the general news publications and free sites reeking with redundancies, we’ve got thousands of titles with “nothing on.”

More media consolidation is inevitable and, done right, it can be a good thing. Publishers in the general news category need to either plan their own exit strategy now, or commit to Truth No.3.

Truth No. 3:  Reinvention requires razing the old to raise the new

In 2017, WAN-IFRA asked publishers what the greatest risk to their future success was. I was surprised, but also delighted to see, that they recognised their own reluctance to innovate as a serious threat. Knowing the problem is the first step towards solving it, right? 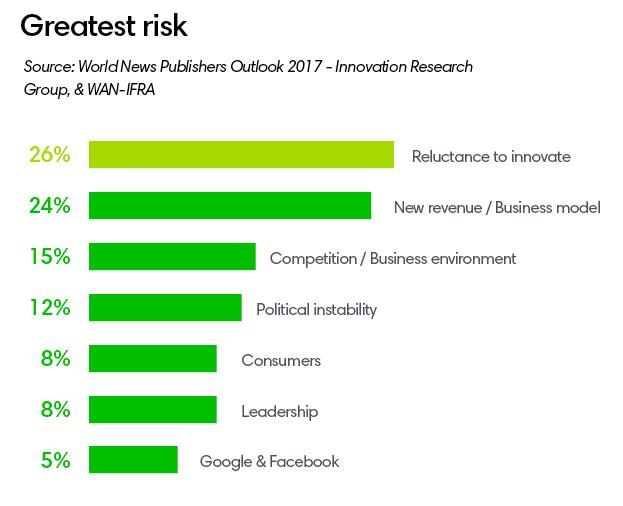 So media executives know they need new ideas to help them change for the better. But as best-selling author, Seth Godin, recently wrote in his daily blog, “The hard part isn’t coming up with a new idea. The hard part is falling out of love with the old idea.”

The commitment to innovate is tough because it requires a lot of courage to raze the old to raise the new. But that doesn’t mean one needs to start from scratch; it means reinventing what already exists into something superior.

Steve Jobs was a master of reinvention. He didn’t invent the technology that turned Apple from a company on the verge of bankruptcy in 1998 into one worth over US$100B in 2011. He reinvented what already existed at Apple, Microsoft, HP, RIM, Nokia, Motorola, and at many other competitors.

By focusing on user experience, Steve Jobs reinvented computers, phones, cameras, tablets, music, software and more. He changed the industry and our lives.

Something’s got to go

The past couple of years have been volatile to say the least in the world and in the industry. And although a few publishers have benefited from that volatility with increased revenues from readers, most have not.

It’s easy to jump on a bandwagon when you’re seeing it work for someone else. But that attitude will have you chasing every new bump, fad, or, craze the current leader is racing to exploit. Subscriptions are not going to work in today’s overcrowded content world for, oh, let’s say, 90 per cent of publishers.

If the number one risk to your business is your reluctance to innovate and you’re not looking to get gobbled up in the inevitable global consolidation that is coming, remember what Steve Jobs said about innovation and focus, “Innovation has nothing to do with how many R&D dollars you have. When Apple came up with the Mac, IBM was spending at least 100 times more on R&D. It’s not all about money. It’s about the people you have, how you’re led, and how much you ‘get it’.”

Then ask yourself, “Do we have leaders who are prepared to embrace innovation? Do those leaders understand what being innovative truly means? And do we have a team who will embrace change? Can we raze the old to raise the new?”

Razing the old to raise the new is not easy, but nothing worth having ever is. Steve Jobs believed, “[Focus] means saying no to the hundred other good ideas that there are. You have to pick carefully. I’m actually as proud of the things we haven’t done as the things I have done. Innovation is saying no to 1,000 things.”

Can you say “no” to the urge to pivot back to subscriptions and channel your energy towards far more innovative solutions? I would love to hear your thoughts. Let’s talk!