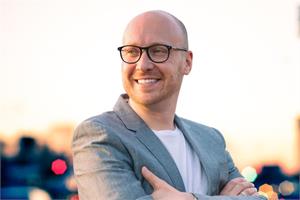 Digital editions have been around for a long time, going all the way back to the late 90's. But in 2010 when the iPad hit the digital runway, publishers jumped on the tablet bandwagon faster than they could shout, “Hallelujah!”. The struggling publishing industry had found itself a saviour.

But by 2013, analysts were declaring that the days of digital edition magazine apps were over, based on Alliance for Audited Media data that reported that the 25 top-selling digital replicas accounted for only 12 per cent of total subscriptions, on average.

When I saw that, I wasn’t at all surprised given that many publishers did little to market them, fearing they would cannibalise their print edition revenues. One really had to dig deep into magazine and newspaper websites to find their digital editions.

I remember when we launched our PressReader iPad app in 2010 and were ridiculed for continuing to support the digital replica presentation even though it was enhanced with digital features (e.g. translation, audio, social sharing, commenting, and text view, to name a few).  Pundits mocked publicly, “It's like putting a blanket over a TV and calling it a radio.”

But we knew many of our readers enjoyed the enriched replica view – it was familiar, convenient, and engaging.  We also knew that another growing group of our users preferred a more fluid user interface, which is why we also offered them an endless horizontal stream of content from all our sources – a content stream curated by the crowd.

At that time there was also a growing fascination with bespoke, non-PDF-sourced solutions, which did not rely on the original print layout. Using software that changed or rather created the new layout of content for native apps, these apps required additional workflows and were quite expensive to build, which is why a lot of publishers moved away from DPS in favour of a digital edition template of RSS feeds or a simple PDF with interactivity layers on top of it.

Regardless of the technology used, I’ve always said that digital editions were a niche product in a fragmented market. It’s just one of many different ways users chose to consume content.

When publishers moved their free website content behind a paywall, it was very difficult for them to monetise what was once free.  But with digital editions there was, and still is, a higher willingness to pay because of the psychological connection readers make to the physical product.

These apps may not make up a large part of a publisher’s overall revenue, especially with more brands diversifying income streams, but they do appeal to a trusting audience that deserves special recognition and respect for their loyalty in a world where trust is so tenuous.

Four years later, the same debates about the longevity of digital editions continue, but here at PressReader we still see ours receiving a significant amount of traffic through our vertical channel partners – thousands of hotels, airlines, libraries, telecom operators, etc.

That being said, we are also witnessing phones overtaking tablet use, putting higher demands on publishers to offer digital editions that give users a more engaging reading experience on smaller screens.  Replicas just won’t cut it. 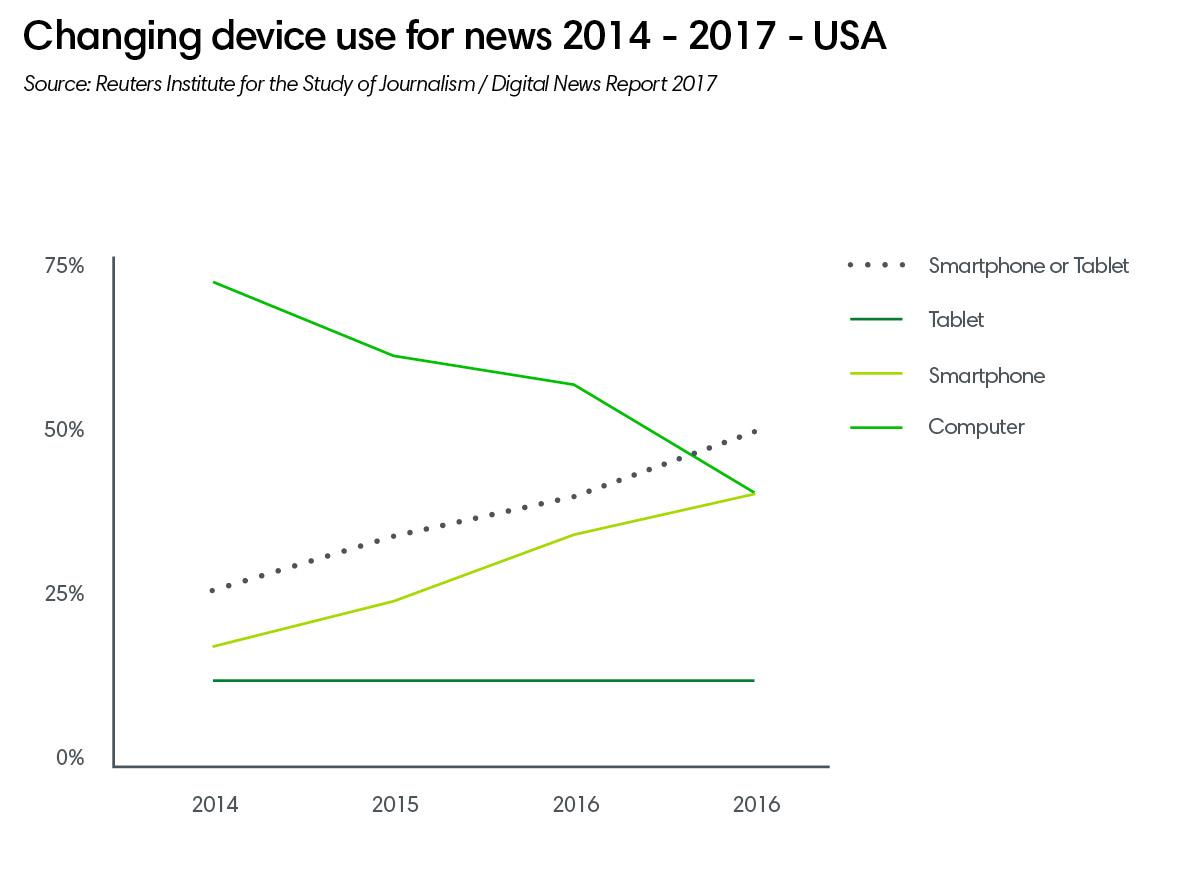 But no two readers are the same, making it very challenging to offer a personalised experience to different people through the same app.  Yet it is possible.  The key is to give them the quality content they want in the presentation they prefer – whether that be as individual articles or publications (e.g. digital newsstand), or as an all-you-can-consume aggregation of content in either replica or non-replica form.

Digital editions aren’t dead, but their growth is not making up for losses in other areas, such as print circulation and advertising. 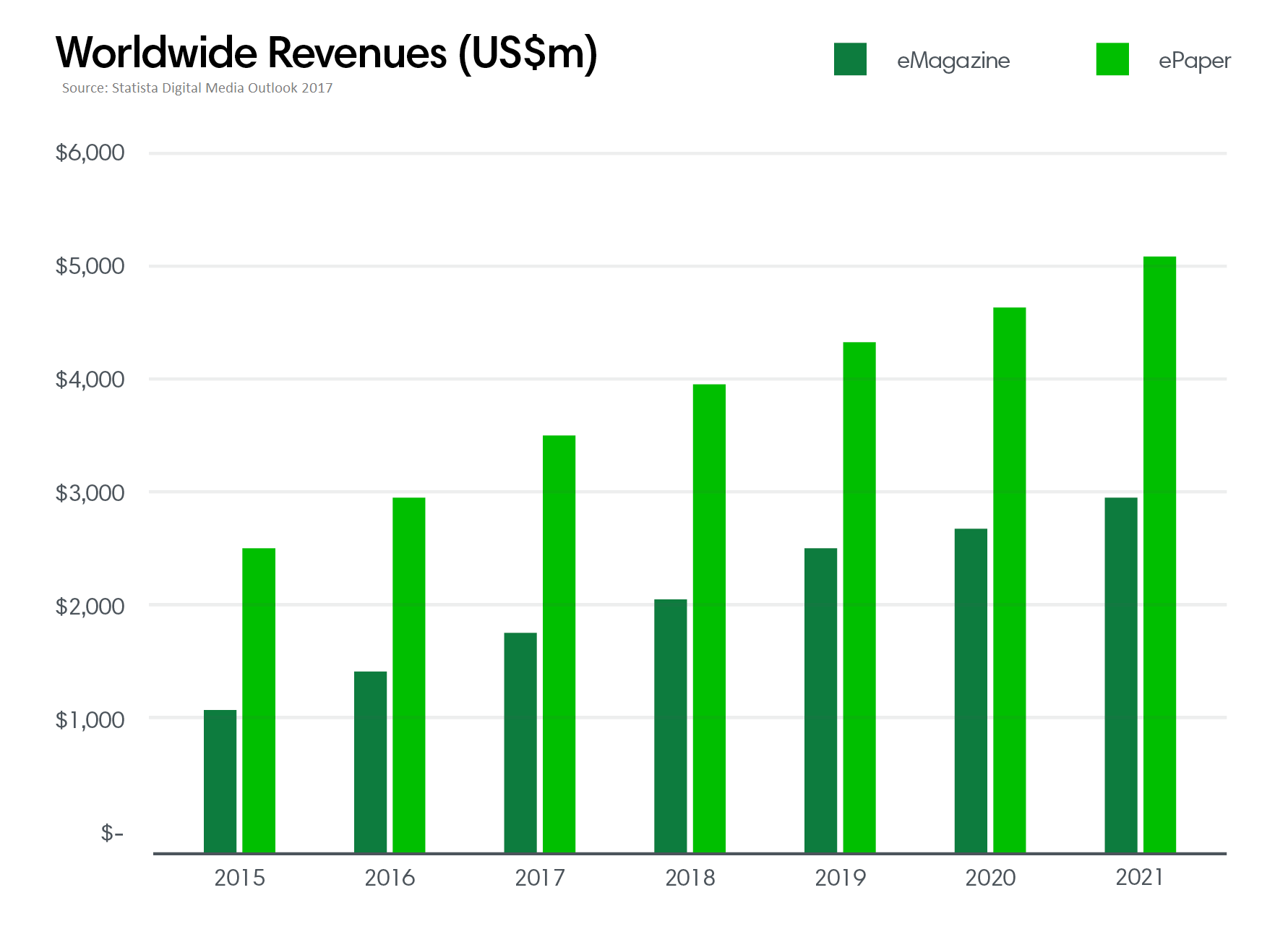 Is it the format or the content that’s causing interest to wane?  I don’t think one can generalise, but there is little doubt that as print editions fall in value in the eyes of readers, so will their digital edition counterparts.

The lack of marketing of digital editions is also not helping publishers grow digital revenues. Combine that with today’s archaic ABC digital edition pricing rules in some countries and you’ve got very few incentives for people to purchase individual subscriptions to magazines or newspapers.

Futurist, Ross Dawson, says that the future of media is platforms that combined content aggregation, community, and commerce.  Before the internet, one could argue that magazines and newspapers were trusted aggregators of content (i.e. articles) with a loyal community willing to pay for it.  Perhaps it’s time for publishers to start offering content instead of individual magazines and newspapers, because with today’s global promiscuous population, single sources cannot provide the breadth of content that feeds people’s passions.

There are many aggregators out there now with different revenue models – platforms that can offer a conversion funnel for media, but whose primary focus is to serve a growing audience that is not interested in a direct relationship with publishers.

Each of these models is only as viable as the quality of content within them.  Publishers could artificially limit the sustainability of these models by withholding content from them, but that would not serve the readers with whom they need to engage for their own survival.

All-you-can-consume is the most user-friendly model, but the price point demanded by legacy publishers is an issue.  In the music industry, the ad-supported freemium model combined with the ad-free, ~US$10/month subscription model has been extremely successful for the likes of Spotify. 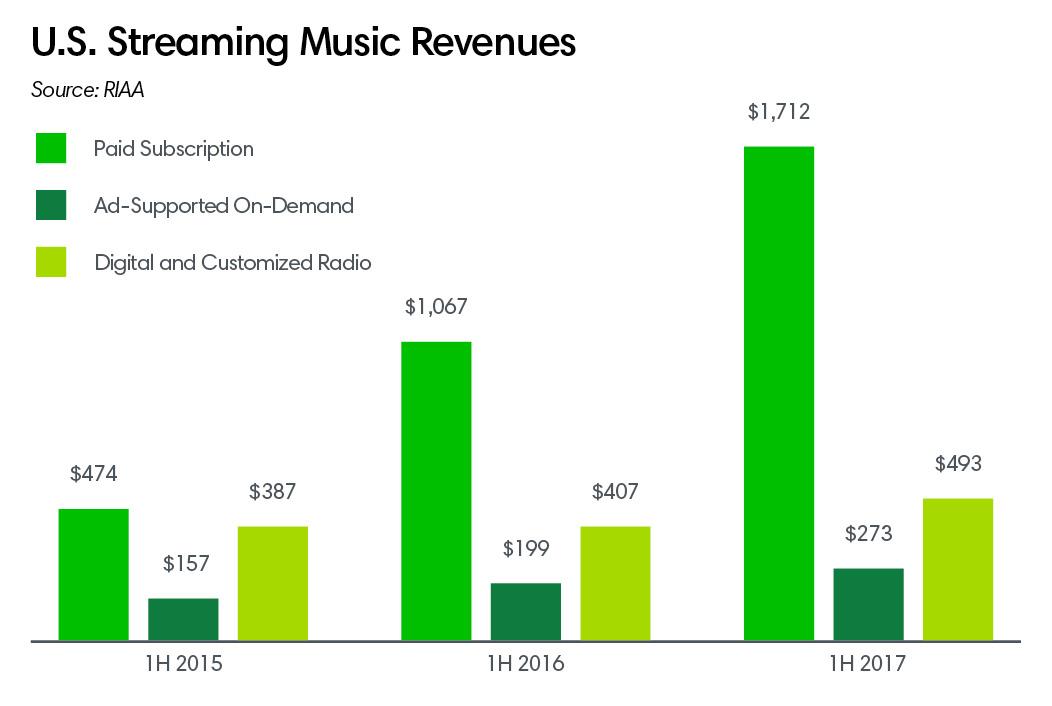 Now, I understand that consumers place different value in different content types and that paying for ethereal pixels of news is not something many are willing to do.  But there are parallels in what happened to music publishers and what’s happening to magazine and newspaper publishers today.

The difference is that major record labels have been able to recover through consolidation and the adoption of consumer-friendly monetisation models – something legacy publishers might want to study further when looking at pricing and packaging for their content. 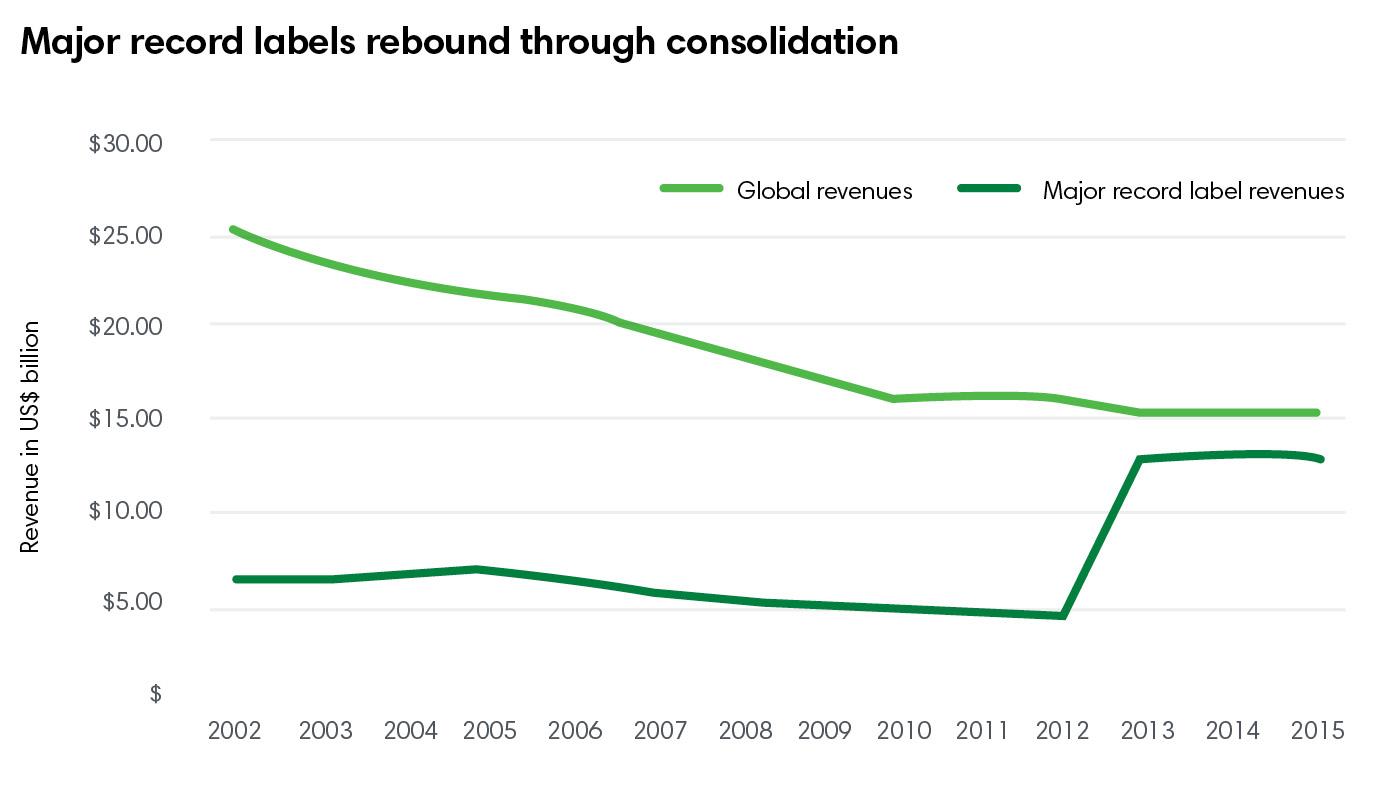 The all-you-can-read model that relies solely on B2C revenue, based on print pricing models that have no place online, are not viable in the long term. Don’t get me wrong, I believe that quality content should be monetised fairly, but as I’ve said before, that doesn’t mean consumers should have to foot the bill.  And why should they when there are thousands of consumer-centric companies willing to pay on their behalf?

But how does one reach digital consumers who often don’t have brand loyalty to specific publications?  Content discovery is the primary driver of traffic and data shows that it’s mainly through social. 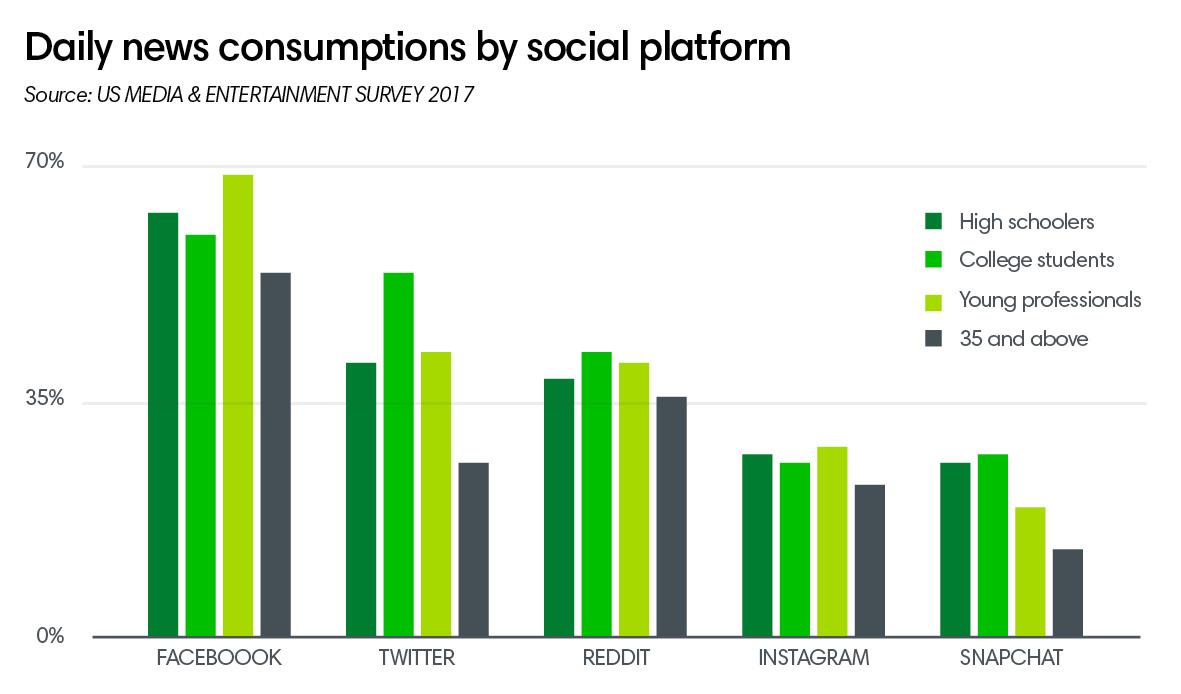 So it’s good to see that social media editorial is a high priority investment for newspaper publishers this year according to WAN-IFRA’s 2017 Outlook report.

But, because we live in a fragmented world where content can be accessed on so many different platforms, it’s difficult for publishers to choose which platforms to market.  Most of them promote their content on their websites, which is fine, but it’s not enough.  Consumers want choice in terms of user experience, so publishers also need to market the fact that their content is available in a variety of ways through different channels.

And social media isn’t the only way people are discovering content.  In fact, messaging apps have already surpassed social media in terms of usage, making it an important part of a publisher’s acquisition marketing plan going into 2018. 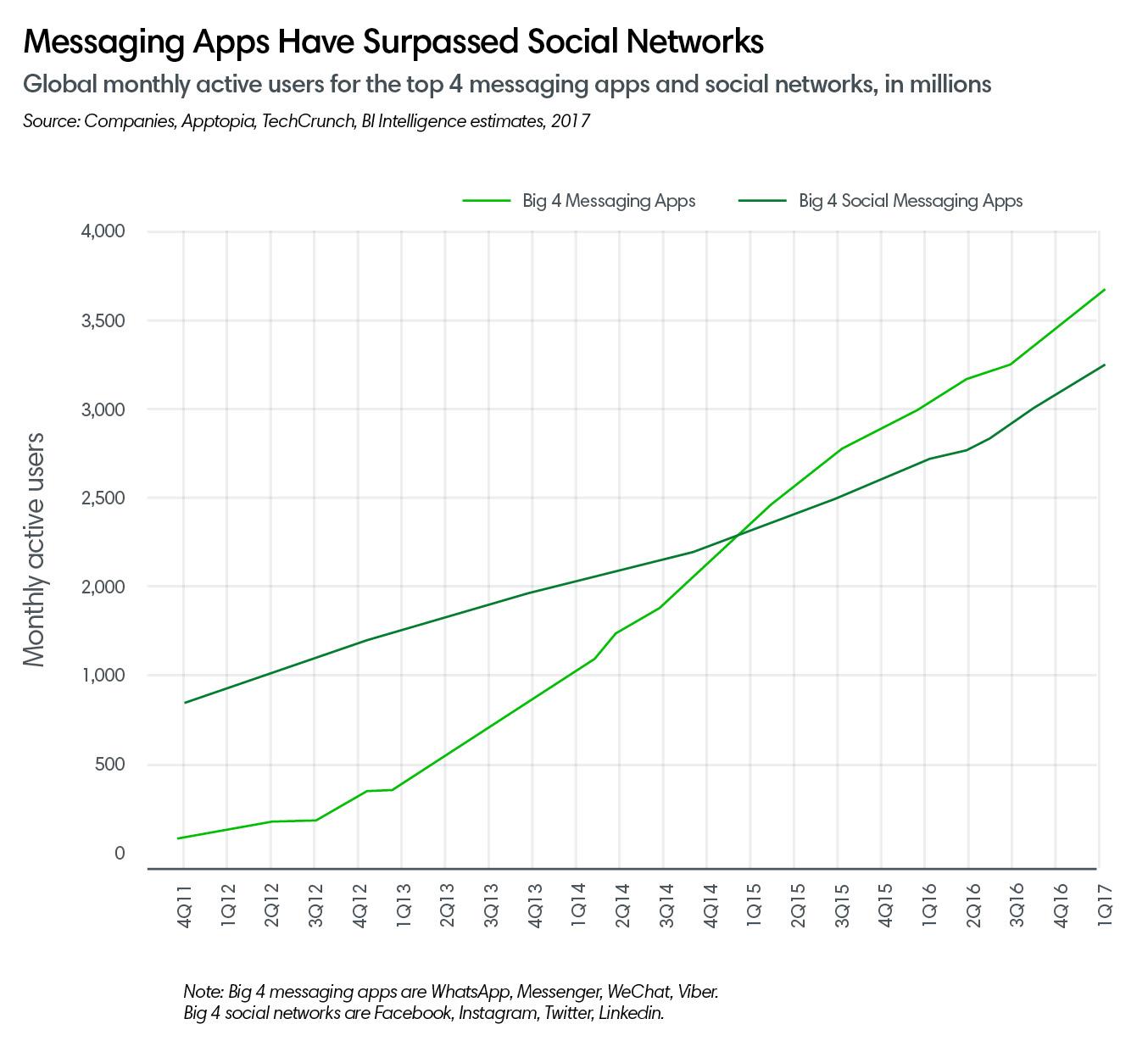 But, if publishers want to build trusted relationships with users, it can’t be done with clickbait tweets and posts to drive traffic.  It has to start with quality content, a quality experience, and showing people the true value of a deeper relationship – a connection where publishers can exchange unique benefits, convenience, exclusivity or discounts for access to people’s personal data.

So what’s the best approach for publishers?

My mantra has always been that publishers need to focus on their core competency – creating quality content – and let the experts in technology do the heavy lifting.

I also believe that mastering these three pillars of a successful monetisation strategy is essential for long-term viability:

A monetisation strategy is only as strong as its weakest pillar.  So if you need helping building effective and sustainable tactics within this strategy to maximise success, let’s talk!

True journalism is not dead - not now, not ever!

Why 'Hello Mr.' bet on print