As a career journalist and producer, Kissi had been covering global markets for more than a decade. What appealed to her, beyond the hum-drum of everyday assignments, were the untold stories from frontier and emerging markets. “These are the stories that often get pushed or take a back seat to more domestic or US-centric news and issues,” she explained. “And as you can imagine, there is usually always a business or financial angle behind almost everything.”

Kissi explained that she would get more feedback and more engagement from readers when she wrote about emerging and frontier markets, like Mexico, Brazil, Indonesia, South Africa or Malaysia, than with regular assignments as a financial journalist. “For example, I did a financial news piece on Bahrain, and the feedback was unbelievable… just when you think no one is paying attention. It turned out to be quite timely given the unrest that was starting to escalate in the country at the time. Investors were watching.”

Kissi said that when it comes to financial news, which is a niche demographic, unless there’s a major coup going on, political/domestic unrest or some other “tragedy,” most of the public never really hears about these markets. There are a lot of regions, countries and issues to look at, Kissi said. “There is a real interest among financial services and market professionals in these markets – more than a crisis or ‘bad news.’”

Emerging Market Media caters to a specific demographic of asset managers, fund managers, hedge funds, brokers, family offices, etc., who do business in emerging and frontier markets, or are seeking to do business with them, and are looking for a different perspective. Coverage on the site often looks at sovereigns and the geopolitics around them, in addition to financial journalism.

“We are working to build a brand and products around financial and business editorial with a focus on emerging and frontier markets,” she said. “Our team is global (my cofounder is British and London-based) and we all share the mentality of wanting to build, innovate and deliver a stellar product or experience to our target demographic.” 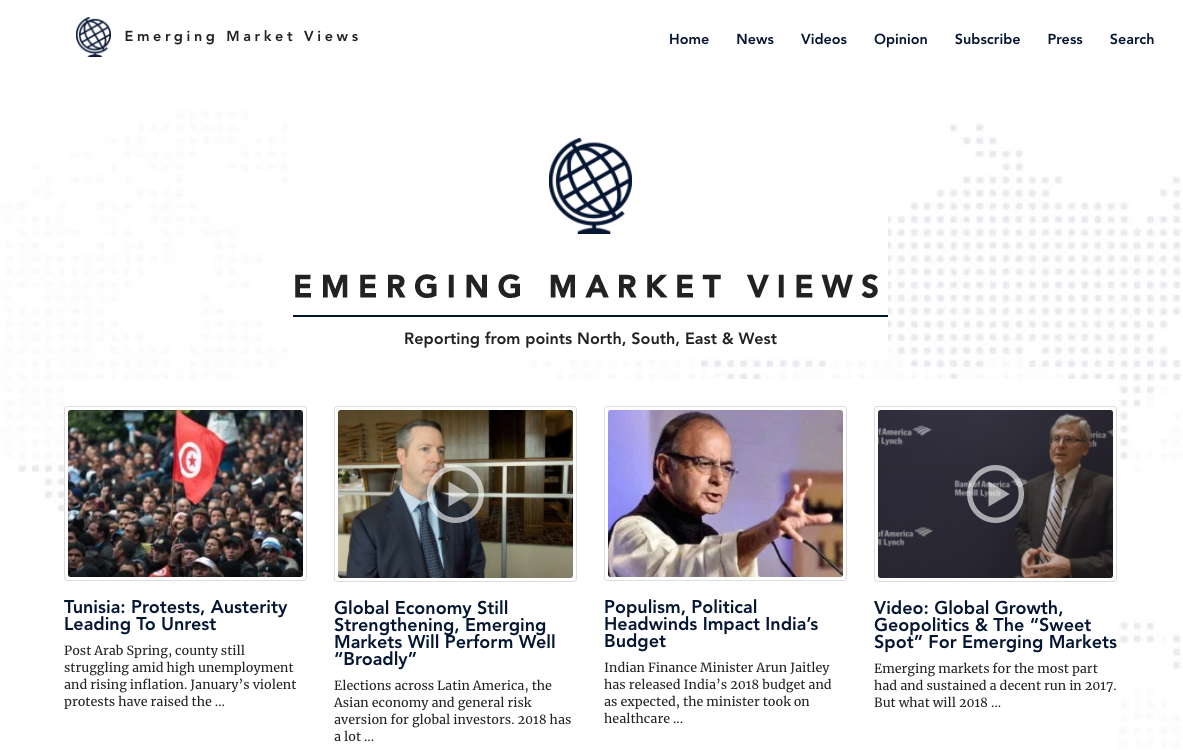 The firm’s flagship editorial site Emerging Market Views, went live in October 2016, and currently publishes three days a week (this spring will see it bumped up to five days a week). Emerging Market Views is not a data or data-driven only site. Instead, it offers executive-level editorials and comment and content that is more evergreen in nature, and a growing amount of video.

In 2016, one of EMM’s most-read stories, for example was a piece about Gabon. “We went into our analytics dashboard, I think a few weeks after the piece was published,” Kissi said. “Someone on Twitter retweeted it. We had no idea – it was a month or so after publication, and it started with the retweet and a share, and we ended up tracing it to Lagos, Nigeria, where someone shared it, excerpted it on his blog and directed it to us, and the next thing I know, it started moving. There was huge interest.”

Because of that single story, Emerging Market Media grew its subscribers and site traffic.

The company is headquartered in New York City, though their team is located between NYC, London and Paris. “From December of 2015 to January of 2017, we “incubated” our ideas and prototypes/testing from the DUMBO area of Brooklyn, New York. We won a grant from the NYC Mayor’s Office of Media & Entertainment (MOME) and part of the grant stipulation was that we base ourselves in DUMBO, at the Made in NY Media Center. DUMBO was good for us in that it’s grown into a true hub of digital media and agency companies. As of January 2017, we are based in Midtown Manhattan, in a great location that is very accessible.”

In addition to a growing website, EMM also has a newsletter, with which it sees great success. “As of now it is a monthly product. We entered in to a partnership with a global asset/fund manager,” Kissi said, as a ‘test’ to see how it performed with sponsorship. It was a success and more partnerships are now in the works. “In terms of monetisation we are looking at adverting partners on a case by case basis and being selective. Our target demo is a high-level one and we want to deliver quality above all.”

Kissi said they will begin to roll out a subscription/membership option in late spring/summer of this year. “To date, we are on the Apple News Reader so we may leave some of our journalism free, but the majority of the site will be for subscribers. Memberships will include multiple offerings and perks and we hope to hone in on and service our target demo the best we can,” she explained.

Global events are also another source of revenue for Emerging Market Media – which they’re kicking off this year with events in New York and London.

Recently, the Global Editor’s Network (GEN) named Emerging Market Media as one of the “Top 30” to watch in global news/media as a platform to “Accelerate Your Newsroom”. Emerging Market Media was one of six named as a platform in the News/Information category. “The judges were really interested in what we were doing,” Kissi explained. “They were interested in the fact that newsrooms are being decimated and here we were, doing high level journalism, with expert economists, analysts, and C-suites, that do business in these emerging markets. “

One lesson Kissi shared that she’d learned from the moment she incorporated Emerging Market Media as a company, to today, is to keep one’s audience in mind always. “There are so many stories we could be reporting on and writing, but are they worth it for my audience? Do they want to read this?” she asked. “I try often to remind myself why I started and what I want to accomplish.”

For members who want to connect with or get in touch with Dawn Kissi and the team at EMM:  team@em-views.com or find them on Twitter at @emviews.