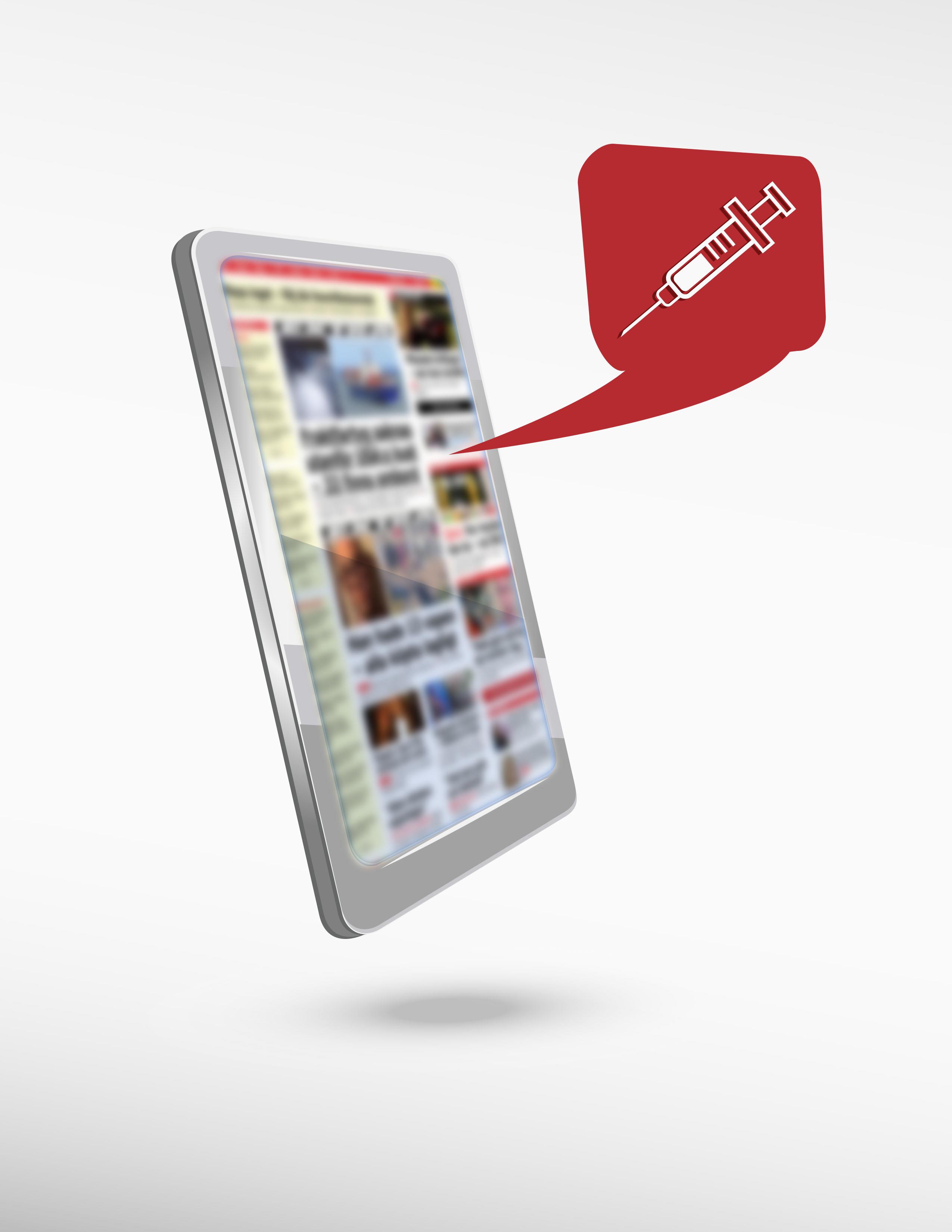 It would appear that the head of the IAB didn’t get the memo that the internet is owned by consumers, not the media and marketers who have been treating the web like a dumping ground for their digital garbage.

Online consumers today have the power to dictate what they want and don’t want. What they want is quality content (which includes advertising) that is relevant and adds value. What they don’t want are the millions of intrusive, low-quality ads that pollute their online experience with abysmal page loading, excessive data tracking, security loopholes and pre-roll Flash attacks.

It’s not like Rothenberg and the IAB didn’t see it coming; ad blocking has been used for years by web-savvy, early adopters. Sure, the average consumer didn’t make the move to clutter-free back in 2012, but it was just a matter of time. Unfortunately, due to the industry’s arrogance or complacency in not dealing with the pervasiveness of a poor advertising experience for users, time has run out.

According to their website, “The Interactive Advertising Bureau (IAB) empowers the media and marketing industries to thrive in the digital economy.” Let’s take a look at what “empowers” means. 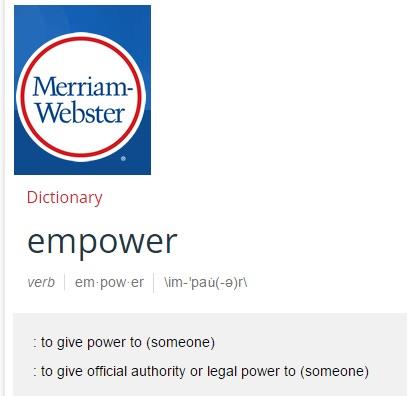 How can the IAB possibly empower their industry online when all the power on the web belongs to the users? Smells a bit like false advertising to me.

Now they’re off trying to develop tools to unblock the blockers – a “too little, too late” Band-Aid solution if there ever was one.

According to a recent study by PageFair and Adobe, there are close to 200M people using ad blocking software today. In the US, ad blocking grew by 48 per cent in just 12 months; globally, it’s growing at a rate of 41 per cent year-on-year. It’s estimated to cost the industry US $10.7B this year in the US and a whopping $20.3B in 2016 ($41.4B globally). 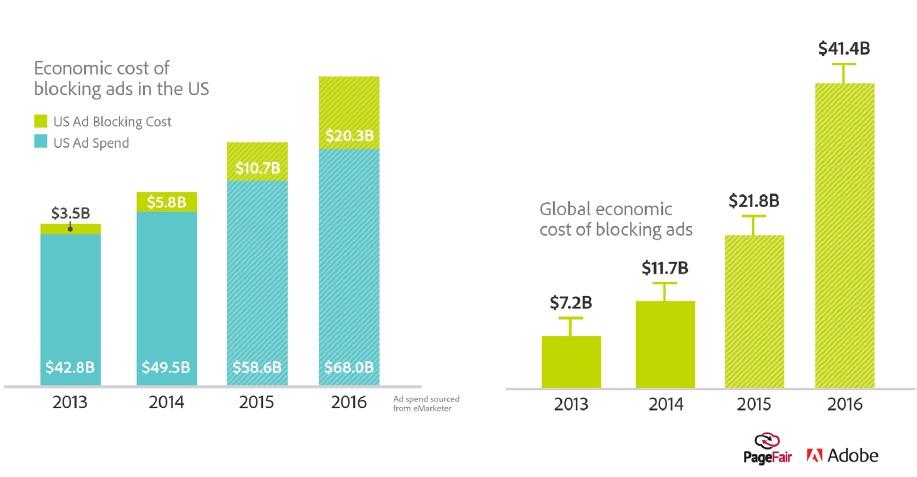 Why wasn’t the IAB paying more attention to ad blocking’s potential impact on their industry and doing something proactive to mitigate its risk? Why weren’t they setting standards for online advertising that would help ensure an enjoyable web experience for everyone? Where was/is their vision?

Today’s internet has become a cesspool of crap and consumers have had enough – hence, the escalation of ad blocking by the masses at a global scale. If the IAB wants to help its members, it needs to start treating the root cause of the problem, which is the rampant abuse of the internet by their members. They helped create this mess and they need to clean it up.

It’s not about advertising; it’s about experience

“Ad blocker” is really a poor name for technology intended to improve the user experience online. Ads aren’t hated by consumers; in fact, in many instances ads are as important to readers as the editorial content around which they live.

This “Vogue Effect”, very common in the magazine world, also exists in other media. Super Bowl ads are watched by millions of people, many of whom aren’t even football fans. Quality ads delivered in a non-intrusive way are not only tolerated by consumers, they are sought out by them.

According to a recent Nielsen study, 60 per cent of consumers on average trust ads in newspapers and 58 per cent in magazines. Interestingly, millennials show the highest levels of trust in both of those media types.

However, digital ads fair much more poorly, not because of they are digital, but because their implementation seriously degrades the online and mobile ad experience. 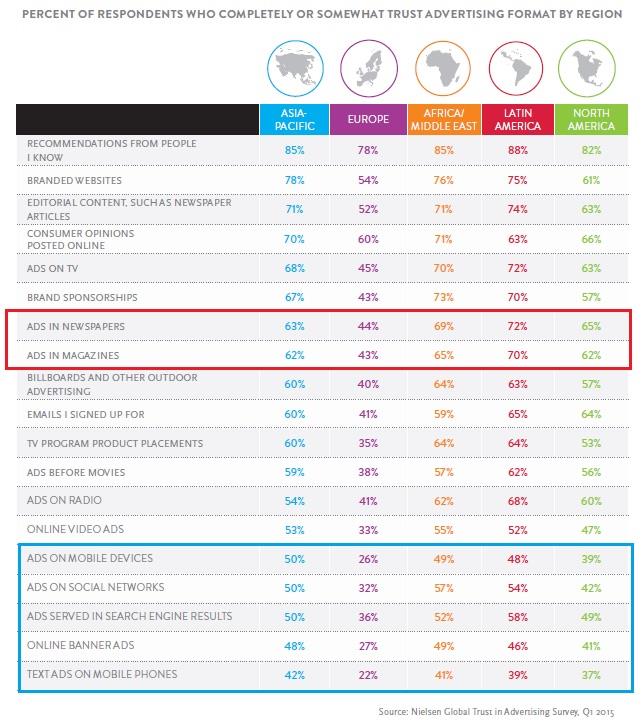 Randell Beard, president of Nielsen Expanded Verticals explains, “While advertisers have started to follow consumers online, about a third of online advertising campaigns don’t work—they don’t generate awareness or drive any lift in purchase intent. As consumers are in control of how they consume content and interact with brands more than ever, understanding ad resonance across screens is the only way to successfully drive memorability and brand lift today.”

Ad blockers would never have seen the light of digital had publishers and advertisers put the audience first when it comes to content (editorial and advertising) and user experience across all platforms.

How publishers can put the toothpaste back in the tube

While I have little confidence in the IAB actually doing anything to help their members stop the bleeding, there is still hope for publishers and their advertisers in today’s consumer-controlled digital world.

If publishers treated the ads on their sites as they do their editorial content, the industry would not be in this predicament. By ignoring the basic law of economics (supply and demand), advertising has become commoditised due to an over-supply of platforms and ad space. No wonder CPMs are so low.

Putting quality before quantity in advertising will mean less intrusive ads and a more inviting experience for users, which will equate to higher CPMs for publishers.

I’ve been an advocate of HTML5 for years, confident it would eventually reduce the need for native apps for publishers. But with the pervasiveness of ad blockers on mobile now, native apps have been given a second life.

It’s no coincidence that Apple killed the Newsstand and launched Apple News at the same time it introduced ad blocking for Safari on iOS. In its efforts to dominate the iOS ad market, it made sure that publishers were left with few alternatives to monetise their content on the millions Apple devices in use today and long into the future.

Sure publishers can add their content to Apple News and share ad revenue with the tech titan or they can create their own apps and own all the advertising revenue.

However, just because advertising in native apps is protected from ad blockers, it doesn’t mean publishers can continue to abuse readers with a poor mobile experience. One in four apps are abandoned after a single use because they don’t give users what they want.

Don’t commit app suicide – give readers all the content they want (which includes engaging advertising) the way they want it. Because you’ll never get a second chance to make a great first impression.

Glossy ads are still a magazine’s best bet when it comes to engagement with readers. But as mentioned in my article, Time to bring sexy back to the publisher + advertiser marriage, glossy ads in web and native apps need to be enhanced with non-intrusive multi-media and include features that encourage sharing, saving, commenting and “click to transact” capabilities. 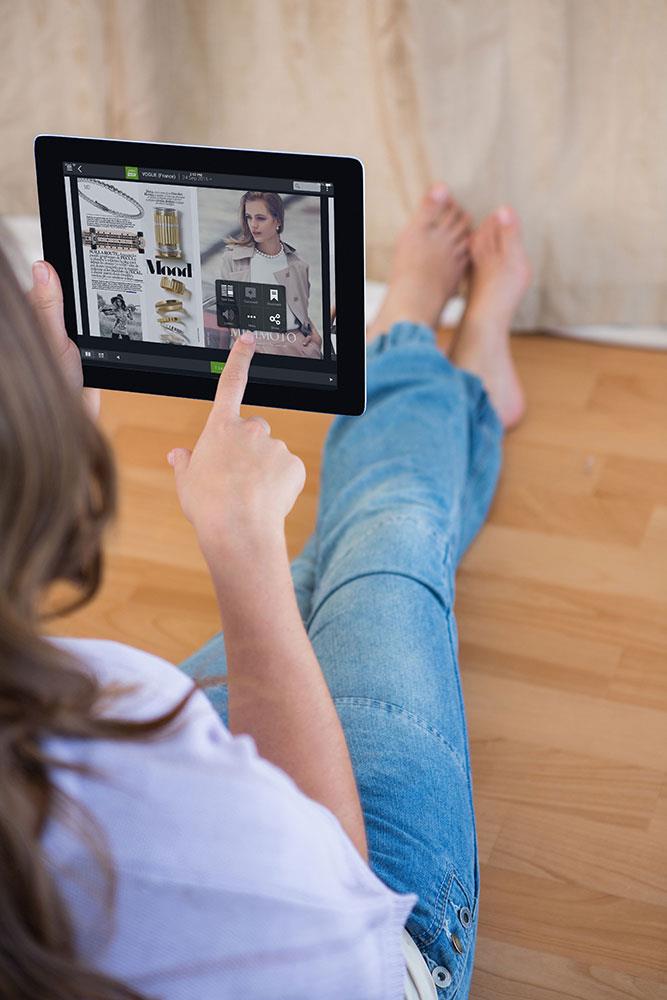 According to BI Intelligence, mobile video consumption increased by 50 per cent in the last year in the US and will account for 41 per cent of total desktop display-related spending in 2020. 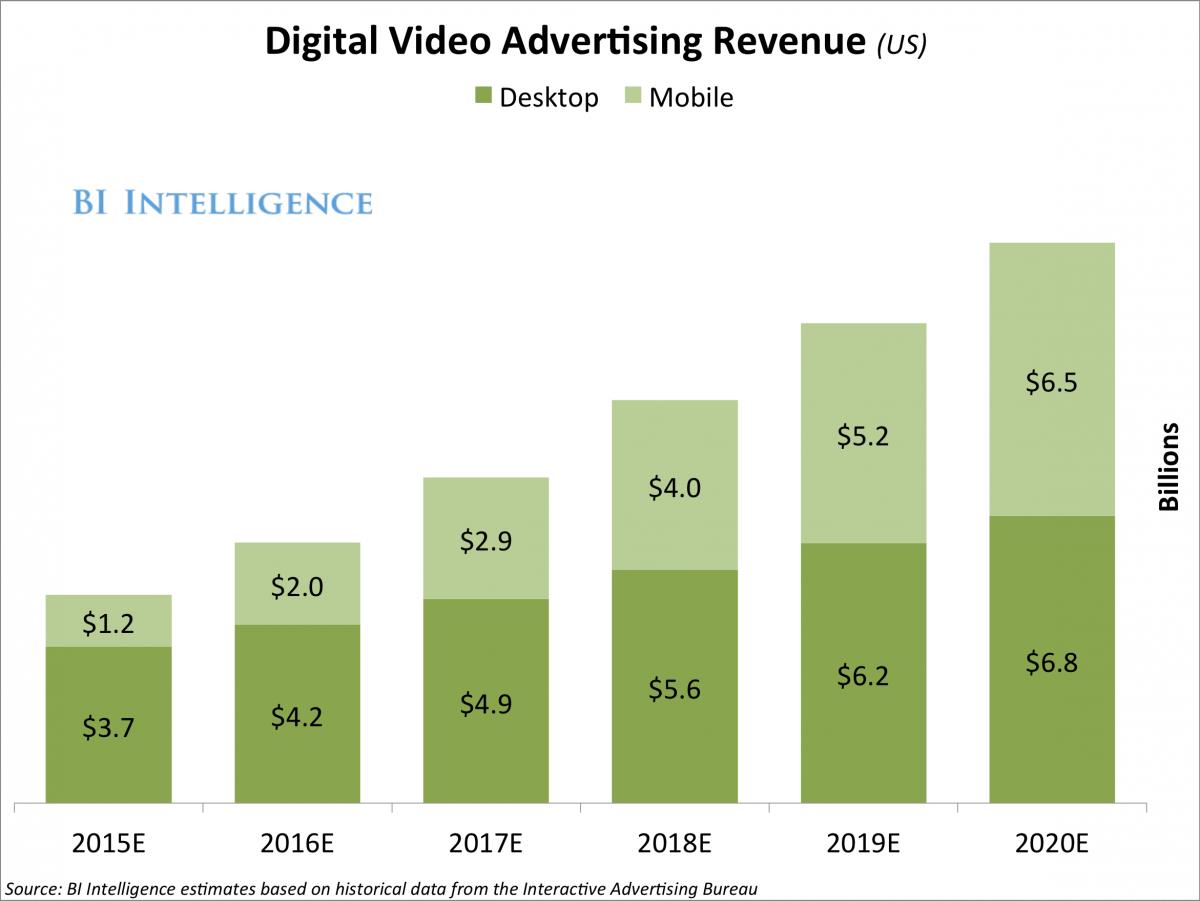 The opportunities in video are huge. Click-through rates are much higher than any other advertising format, especially on mobile. So let’s not screw it up. 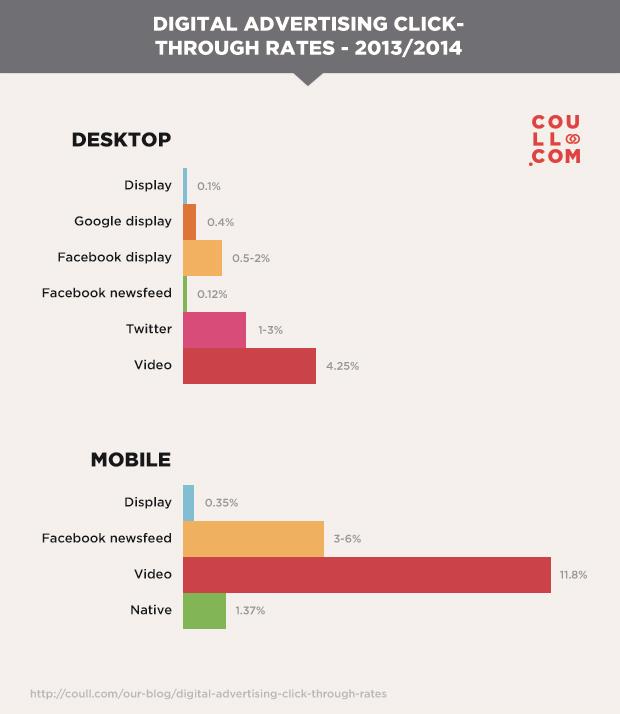 There are two types of video advertising formats that are in use today. The most common is instream advertising where video ads are placed within a traditional digital video player. These ads are heavily targeted by ad blockers because they are often implemented in an intrusive, “in your face” way.

The second is outstream video advertising which plays video outside a traditional player. These videos are less susceptible to blocking because they reside within or between articles, newsfeeds, or slideshows allowing readers to easily swipe them off the screen like they would any other content.

Outstream ads are gaining popularity for many reasons, not the least of which is their higher CTR. 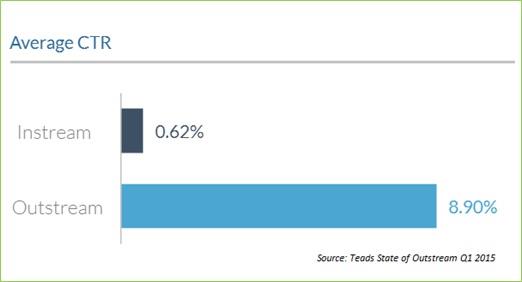 I’ve been a satellite radio subscriber since 2004 because terrestrial alternatives have too many ads and don’t play the music I love. I am very happy to pay for quality content and ad-free environment and millions of others are as well.

A quarter of Spotify’s 60m users are willing to pay ~$10/month for a better ad-free listening experience. Hulu has recently introduced an ad-free paid content option and Google is following suit with a $10/month ad-free YouTube Premium offering.

There’s no reason why magazine publishers can’t offer something similar.

There’s been a lot of buzz about branded content lately, with many publishers diversifying their business and offering content marketing solutions to their advertisers.

According to the Boston Consulting Group (BCG), the branded content market is expected to grow to over $25B by 2020. 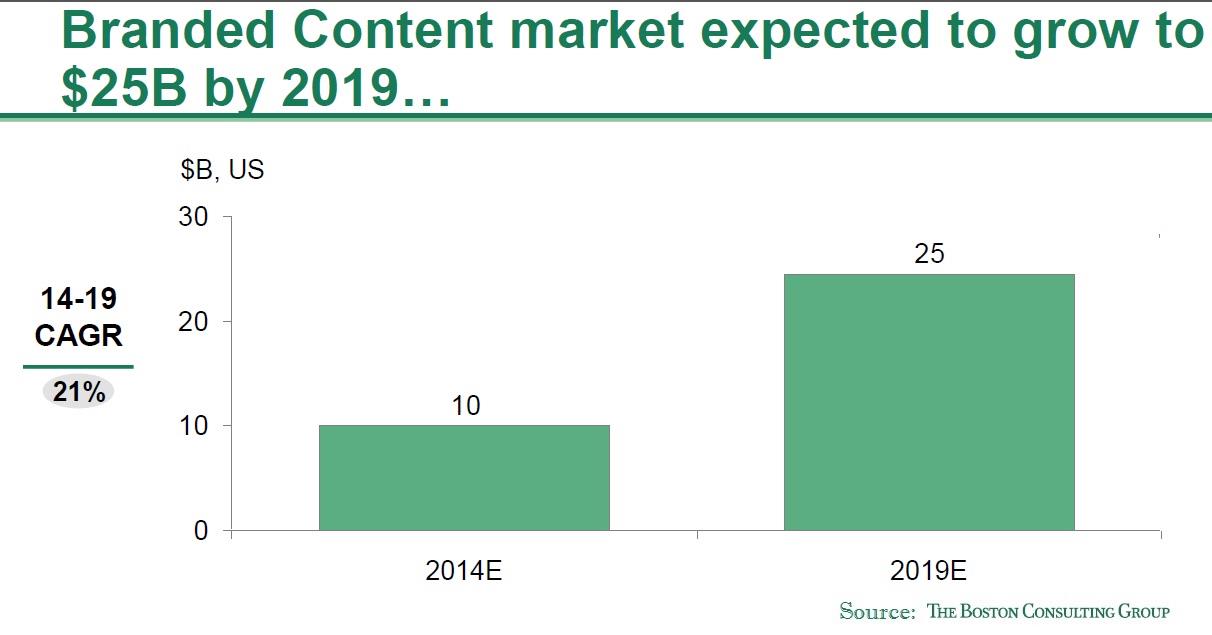 In a recent study, the consulting firm surveyed 4,500 people across multiple markets and demographics and reported these key findings:

• The vast majority of consumers have encountered, enjoy and seek out branded content

• For those consumers who dislike a brand, branded content magnifies their dislike

BCG also claims that branded content can drive a positive consumer trust in the media companies that participate with those brands – providing a “halo effect” for publishers.

Magazines are a natural fit for quality branded content that engages readers. 70 per cent of marketers are expecting to increase their branded content this year; this is an opportunity magazine publishers don’t want to miss.

Time for some preventative medicine

The IAB is wasting time and money promoting unblocking solutions and launching useless legal action against ad blocking companies; their tactics will only result in engineering wars on the web and padding lawyers’ pockets in the courts.

Saying ad blockers are anti-competitive because they are taking revenues away from publishers is like the record labels accusing Apple for killing their lucrative CD industry. And we know how that turned out!

For every perceived poison (i.e. ad blockers) the immediate reaction is to search for an antidote (i.e. un-blockers). But that doesn’t cure what ails you.

The secret to a healthy future and bottom line is to make your digital properties immune to ad blockers by serving up content and advertising that engages readers rather than enraging them.

UK publishers mixed on how to combat ad blocking