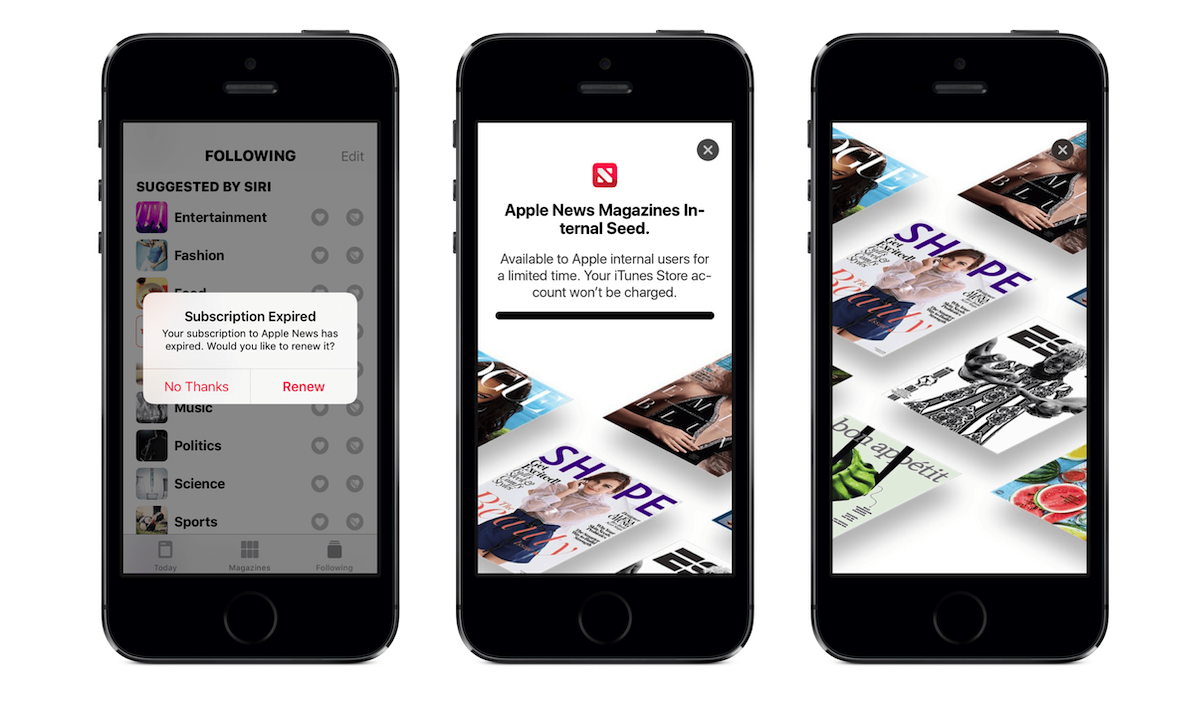 Apple’s proposed news and magazine service is aimed at offering Apple users to pay a single monthly fee of $US9.99 to access all-you-can-eat content from dozens of publishers, as opposed to require separate subscriptions te each news source or magazine. The new subscription service is rumoured to be scheduled for launch as early as next month but The Wall Street Journal reports Apple has run into trouble with some of the major publishers to sign up because the tech giant wants to pocket 50 per cent of the revenue.

According to Jason Kint, CEO of Digital Content Next, a trade organisation that advocates for traditional media companies, Apple’s approach is “a punch in the nose (of publishers)… there is a significant concern around how platforms are squeezing the oxygen out of the media ecosystem.”

While some publishers have referred to the revenue share as “insane” and/or “greedy”, there are those who have already agreed to the terms. Recode.net reports “many publishers have already signed deals” simply because they believe Apple will sign up many millions of people to the new service. They gamble on the possibility that a smaller percentage of a bigger number will bring in the bacon.

With neither the publishers who are negotiating with Apple nor the smartphone maker prepared to comment, this is what we know thus far:

– Apple purchased a bundling magazine content service called Texture from a consortium of publishers, including Condé Nast, Hearst, and Meredith in March last year. Texture was originally designed for iPad and offered subscribers a deal to read all the stories they wanted for a monthly fee. It was never successful.

– Unless radical changes are made to Apple’s beta version of iOS12.2, Texture will be relaunched as a premium version of Apple News on mobile to be called ‘Apple News Magazines’. This has been confirmed by 9to5mac.com who, late in January this year, managed to activate the landing page for this new service (see image above).

– Apple wants to keep half of the monthly subscription fee with the remainder being distributed to publishers offering their content to the service based on the amount of time users are engaged with their articles.

– Payments for the service will be linked to user’s iTunes Store account, in the same way users pay for Apple Music.

But the slice of profits Apple plans to pocket isn’t the only sticking point. Two other major concerns stand out:

1. The lack of data sharing

Appleinsider.com reports that many publishers are concerned that they won’t gain access to the same level of data about subscribers than they would from a normal subscription. Information about subscribers such as email addresses are of growing value to publishers because they can construct their own customer databases that can be used to market other products and services to readers. It is believed this is one of the main reasons the New York Times and the Washington Post (some reports also refer to the Wall Street Journal), which already have large subscriber bases, are among some of the major publications not to license content to Apple, owing to concerns described as “undisclosed terms”.

Adage.com reports some publishers say they doubt that Apple can deliver the money and audience it has been promising (one source said Apple claims it could make about $2 million in the first year) for the subscription service. Described as “wildly optimistic” some publishers point to the original Texture that simply did not work. Unless Apple manages its re-incarnation with care, the same is likely to happen, with both engagement and revenue remaining low.

What we don’t know…

1. Can a premium news and magazine bundling service still work without large publishers such as the Washington Post, the New York Times and Wall Street Journal?

Maybe, because the focus of the new service seems to lean more towards the introduction of magazine content. More simply put, if you buy into what tech analyst Alastair Coote suggests on Twitter, that “Spotify for news” sounds good until you realise the actual comparison is “dozens of artists releasing cover versions of the same song every morning and desperately trying to get the algorithm to put their version ahead of everyone else’s,” then the uniqueness of magazine content is more compatible with the suggested model. Time will tell.

2. What is Apple’s real intention with the service?

If Apple is trying to generate an alternative revenue stream to try and offset the growing decline of iPhone sales, as slate.com asks, the motive is questionable at best (and Apple is in serious trouble). If, however, the motive is to provide a valuable service for readers and publishers to ultimately boost iPhone sales over Android, there is no reason why Apple should continue to drive such a hard bargain.