One of the speakers at DIS who is focused on Blockchain is Ingo Rübe, CTO at Burda Magazine. He began his presentation by suggesting we take a step back and look at how the web has evolved thus far. 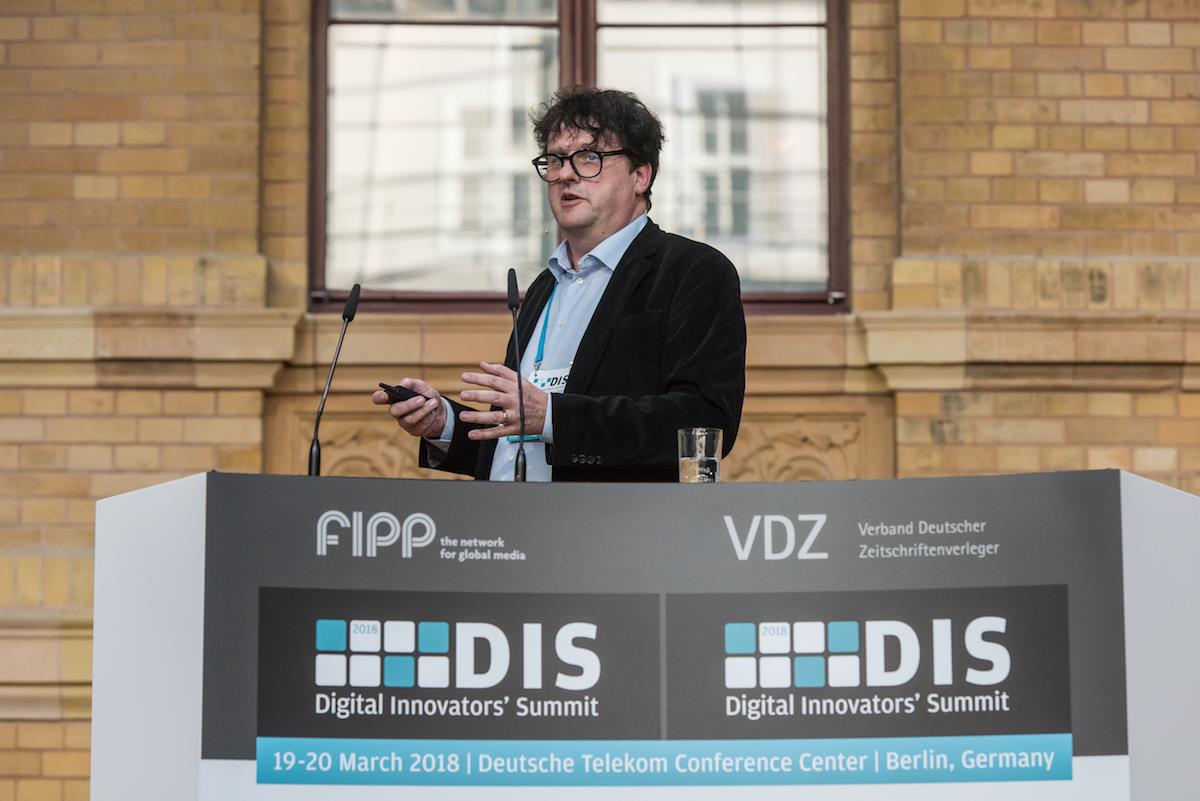 He then outlined the history of the open web explaining how it developed and lead to the creation of intermediaries who bring the consumer to the producer.

Ingo explained that this type of economic model, which started in 1995 is now really big. “Four out of the five biggest companies in the world are Internet intermediaries, which underlines it it is a good business model.

“They operate on the open web,” added Ingo. “This is where we live as publishers. The open web is life insurance for publishers. Some companies are starting to build closed web platforms, like Facebook, Twitter, Snapchat and some websites. If we lose that direct connection to the consumer we are dead,”argued Ingo. “We should fear the closed web as the closed web destroys whole economic sectors.

Ingo then asked the audience “how do we respond to the closed web as publishers? Do we build our own platform?”

He argued that it is not a sensible move to create or take on platforms. In the past publishers have tried to legislate against the intermediaries or harness the regulatory prowess of the EU to tame their influence. “The problem is that the tech is always faster than the policy,” he concluded.

Ingo believes that the solution could potentially be Blockchain. But how does it work? Ingo explained “today the producers and consumers are connected by intermediaries. Tomorrow the connection will be via Blockchain protocols, owned by everyone, and they will connect users and producers and do it in a decentralised and secure way.”

Ingo shared an example of how Blockchain was already changing industries. “Today with Bitcoin, users can share money and there is no need for a bank to complete the interaction. Bitcoin is not the end of the story. A similar process will be repeated in more and more industries. For example, by the end of the year data hosting will move to Blockchain.”

Blockchain makes the protocol central and leaves a smaller application layer on top, which, as Ingo pointed out, is an inverse of what currently happens. “The services developed on the Blockchain are open and decentralised, and support innovation,” he added.

Ingo gave another example. “Publishing in the paid content world has moved beyond intermediaries. In the future there will be a Blockchain protocol, the advertisers and consumers will all live on that platform.”

“Blockchain based protocols will replace intermediaries. Not today, but in five years the Internet will look very different. We will not call it Blockchain, but it will be Blockchain based.”

Ingo finished by suggesting “in the future we will need to invest in protocols. We need to define new rules for the tech sector.”

Over the past twelve months Blockchain has inspired a small cadre of startups to look at how the technology can be used to solve issues facing the media. One of the most high profile is Civil, a company that recently scored five million dollars worth of investment from Ethereum studio Consensys. At DIS the company’s co-founder and head of journalism operations, Daniel Sieberg outlined Civil’s vision and how it hopes to revitalise journalism. 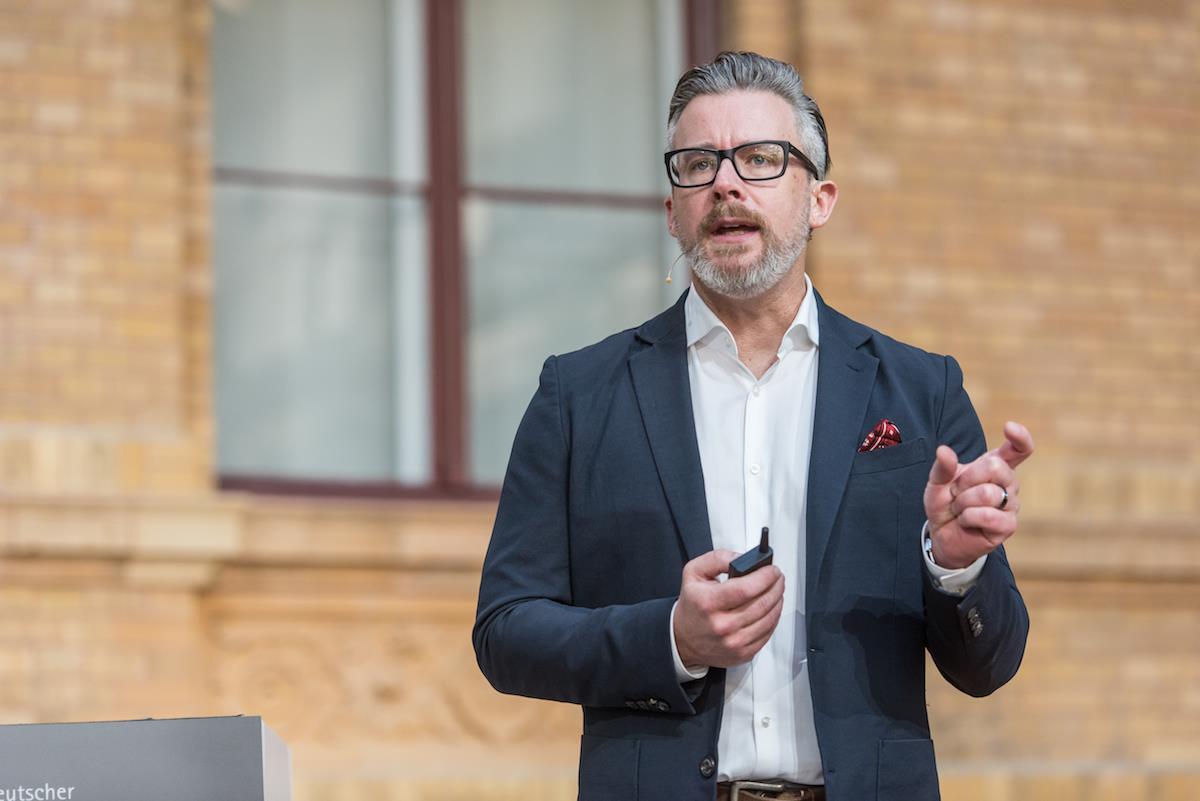 Daniel kicked off by outlining his experience in both the academic and media worlds. He explained that last summer he came across Blockchain, and in particular a startup called Civil. Following on from a meeting with the founder Daniel joined and is now part of team of 12.

He stated that he feels that “the future of journalism feels threatened with billionaire owners closing media titles and journalists being laid off.” He said he sensed a cry for help, with people asking what can be done to secure the future of quality content?

“The public is losing trust in what the media is up to – what we do we is reset that conversation – we value quality journalism. We are trying to create the right platform and marketplace for that to thrive.”

Daniel added “basically we are working on a decentralised market for journalism built on Blockchain technology. We are looking to create a more direct relationships between newsrooms and audiences, taking out advertisers. Daniel added “I know this feels uncertain, but I am now a convert.”

“There are many aspects of Blockchain that can help to change the relationship between journalists and audiences accentuating trust and transparency. We also think there is an opportunity for circumventing things like censorship etc.

Daniel said that Civil is set to launch in a few months time. It will begin with between five and fifteen publishers and that five news rooms have already been announced. Daniel added that local news, policy and investigative and international journalism is of special interest. “There is a void in those spaces today. It is not because people don’t care about those topics, but rather that the business models that support them are broken.”

He then ran through the five startup companies that would be first on the platform which include Blockchain Chicago, which has already raised significant fund through Kickstarter, and Cannabis Wire a group of women who Daniel said are excited about the emergence of a multi million dollar industry globally.

The news sites will be underpinned by a constitution, an amendable document which spells out to the audience what Civil stands for. Daniel added “we will soon open it up to the public. It will ultimately be a document managed and amended by the community. Newsrooms are independent and will be able to set up their own business models within the Civil platform from day one.

In tandem with this Civil is launching the foundation for quality journalism, which will include academics and industry figures who will have oversight about what happens on the platform. There will also be protocols that will enable the community to determine whether controversial articles are free to be posted on the platform or not.

The platform will also enable a suite of monetisation options including the chance for individuals to pay per article quickly and easily.

Daniel finished his presentation by encouraging the attendees to explore Blockchain and in particular to find out more about Civil’s plans.