CEO and editor-in-chief David Skok, formerly at The Boston Globe, The Toronto Star and NiemanLab Fellow, tells FIPP The Logic is a new subscription-based in-depth reporting around the innovation economy.

“I feel the gap in the market is one that people don’t realise is there, which is, if you look at the traditional sections of a newspaper or even a broadcast… tech coverage has tended to gravitate towards either to high valuations or product launches,” he explained. “In our experience, tech goes well beyond just that. It is, in effect, impacting every facet of our lives.”

The Logic will inhabit the space between publications that cover tech valuation stories, and general interest tech stories that may come from a newspaper, with the goal of covering companies, policies and the societal impact of the innovation economy.

“If we’re going to be a country and a society that can compete with the rest of the world, we have to double down on our focus on innovation. Our role as journalists is to facilitate that conversation, so that readers and the country at large can talk about some of these huge pressing issues in our lives.”

“I don’t view us as a business publication, but I also don’t view us as a broadsheet,” Skok said. “I think we fit in a very unique space and, hopefully the space is broad enough we can attract enough people who can identity with it and want, as our tagline suggests, “to constructively disrupt the status quo.” 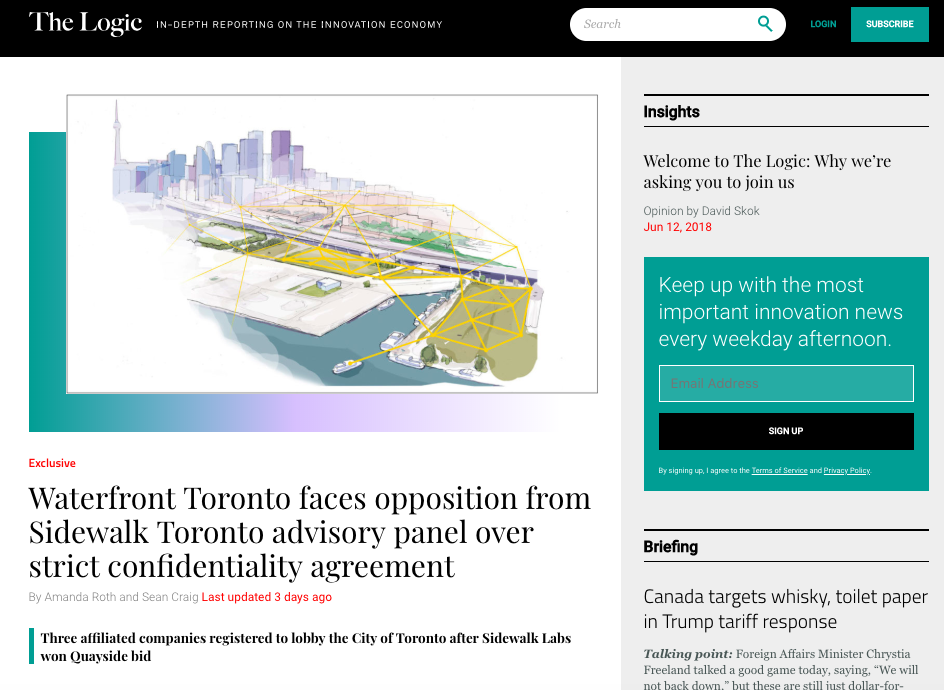 The Logic’s target subscribers are, as Skok explained, “people who understand that the way we’ve always done things isn’t going to serve us well as we compete in a globally competitive market.”

“I believe we’re in a very unique moment where for the first time in 150 years, journalism does not have to be subsidized by advertising,” he said. “And, that’s a wonderful thing, because it frees us up to be independent.”

He strongly believes that Canadians and those interested in Canadian issues will subscribe, confident that there is a market for people who want to support independent Canadian journalism. “Good journalism always wins out,” Skok said. “We believe good journalism is what people will always support.”

The first group of paying subscribers becomes part of ‘The Logic Council,’ outlined in Skok’s welcome message on Medium as “a membership community of service-minded leaders that, facilitated through our journalism, will aim to move our country forward through exclusive events and discussions.”

“We’re all engaging in the conversation together,” Skok said. “It’s not just about accessing the journalism, it’s about creating community of people.”

Skok is also differing The Logic by the scale of the content it produces. He explains that The Logic won’t operate like other digital outlets, chasing scale and trying to produce as much content as possible. Instead, it will take its time and only report on the things that are worth paying for.

Deciding what makes the cut is “incredible pressure, but it’s a wonderful pressure,” Skok said. “You choose by having your reporters only doing stories that matter. Stories that rise to the top have always been high-quality, deeply-reported stories.”

Looking forward to the next 12 months, as a bootstrap startup, Skok has his eye on reader revenue and support.  “Like any other startup, it’s important to get cash flow, so our hopes are that we get enough reader support to give us runway to showcase what we’re capable of,” he said. “If we can showcase what we’re capable of, we’re confident that we can continue and grow.”