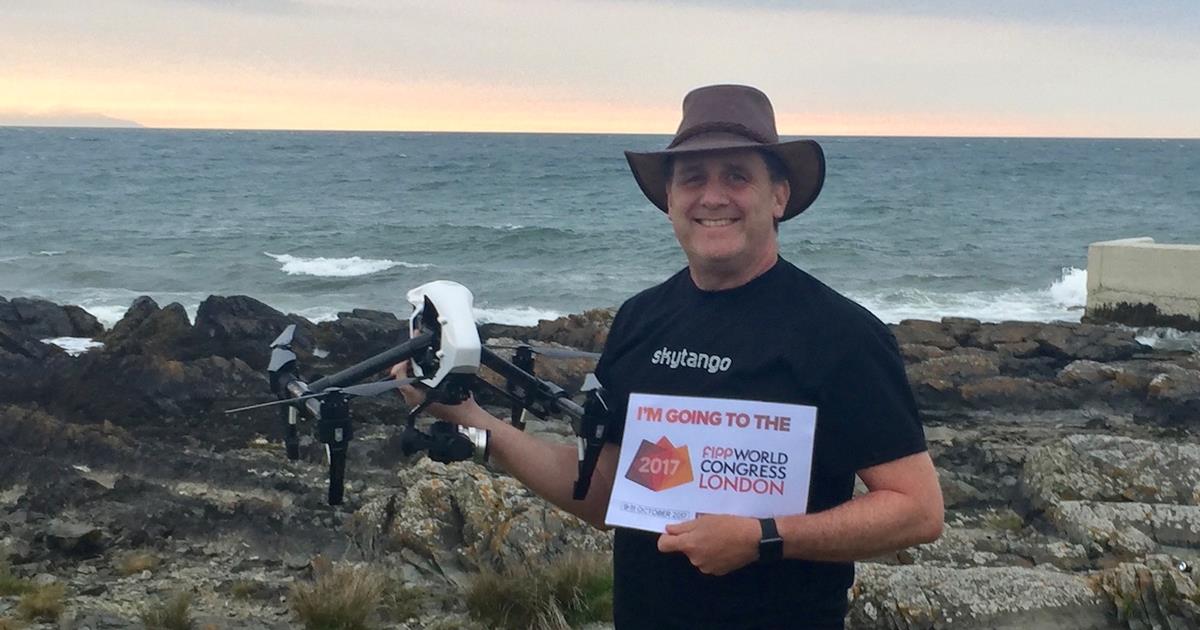 Here, Steven, who will also speak at the 41st FIPP World Congress in London in October, explains why the platform is important to the future of the industry, as well as why drones footage is such an opportunity for content producers…

What’s driving the growth and development of drone footage?

The drone stack really enables you to do some things that you couldn’t do without a big budget, right? With crane moves and dolly moves, and especially as the drones progress in terms of position and stability, you won’t be able to differentiate between a drone shot and a crane shot. We also get called in to sets where they can’t get a crane in because of the terrain, and the shot’s only possible with a drone. So it kind of democratises some of that high-end equipment. If you want to get technical, Freefly have just unveiled at NAB – a five-axis stabilised camera, which up until now was only for the really high-end stuff. It’s like a MoVI with a stabilised lens and steadicam arm. It shows you how fast this technology is developing. It’s a great example of something you can slap on a drone to give you the kind of shots that used to be for big-budget productions. It’s so much less expensive than it used to be.

I see lots of events now where drones are being used to capture the footage. It really is a game-changer – so what are the other implications of that?

It’s changing content producers’ mindsets around their responsibilities in deploying drones. Up until now, a producer or a camera person weren’t putting other people at risk. Whether the risk is high or low, depending on where they’re flying, putting something up in the sky becomes a whole different game, right? So in that way the content-makers have a responsibility. You can’t just say, well, it’s all on the drone operator. That’s not always the case. We need to be looking at ways we can apply these techniques and platforms in ways that people haven’t done before, on a low budget. But we also need to be doing that in a safe way.

Presumably, as video grows even further in popularity, issues of responsibility and who takes the risk on production will only become more complex, will it?

Absolutely. The thing about film content is that it creates a real problem for the users and the consumers of aerial content. Take an ad agency as an example. Let’s say a major brand hires an ad agency to manage their image and their reputation. The ad agency comes up with some great social campaign and they hire some smaller production company and give them a bunch of money to film it. The production company hires a drone pilot, a director and a producer, and they’re all freelancers.

In that situation the director is under pressure to deliver and so the drone pilot is under pressure to take risks. The brand on the other end of that chain is looking down going, well, we didn’t actually hire him, another company hired him. And if nothing happens it’s fine for the most part, but if anything goes wrong, and there’s any breach of insurance, or something happens that suddenly exposes the brand, then there is a potentially big problem. Because now it’s much more of a grey area.

So that’s where Skytango comes in, to help with those kinds of issues?

The platform is really built around giving all the players a voice in the process, so that when the drone pilot arrives on location, he or she ends up being able to see what the requirements are from all ends. Then what we do is we actually track the compliance of that. So upon completion of a job and upon delivery of the content, there’s also the ability to go back and look at how things were performed and captured. So if there are any issues with any kind of an accident or with permissions or questions about how somebody acquired something, we have the answer to that. The brand has the ability to go back and say, no, this isn’t exactly what we requested. If something is awry, they can show it wasn’t because of anything they were intending.

As something that’s still emerging and is still very new, there have been some concerns around drone flying in general – around privacy, around IP, around flying things near aeroplane etc. Is what you’re doing designed to remove some of that stigma, to help avoid over-regulation from here?

Absolutely. We’re only in year three of this as an industry that’s in the minds of the public. Over time, communities are looking for ways to manage drone operators and you can’t have a management policy that says everyone who’s flying a drone crosses their heart and promises that they’re going to obey every rule. There has to be some kind of a structure so that the communities have a way to engage in a positive way. So our approach is trying to figure out how to say yes with constraints and the ability to encourage compliance.  So we’ve really built a marketplace that rewards compliance and creates more value the more transparent and compliant you are.

Learn more about how Skytango can work for publishers at the 41st FIPP World Congress in London, taking place at Tobacco Dock near the Tower of London, from 9-11 October 2017. Steve will be one of more than 75 speakers sharing insights, experiences and ideas at the event. Click here to book your place.

[Congress speaker Q&A] Prisma Media transformation chief: ‘Nothing will ever be the same again’