Recode broke the news that Google is working with Twitter and other technology companies on “a new kind of web link and article storage system” to speed up load times to deliver news articles in a few milliseconds instead of the seconds it usually takes to load pages on mobile devices and on the web.

Data from Keynote underline the huge gap between the technology driven big players in the market like Google, LinkedIn, and Facebook and the publishing world. A maximum of two seconds load time is a widely accepted benchmark in the web and mobile performance community and an indicator for a good user experience. All news organisations fail to meet it with their mobile sites. Losses in visits are inevitable, and losses in the millions of visits translates into losses in advertising revenue. Enough reason for advertising giant Google to do something about it with its latest endeavour. 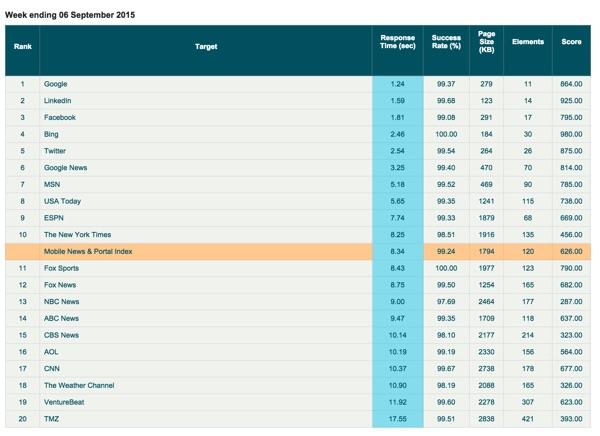 Above: Mobile News and Portals – US, week ending 06. September 2015. Data by Keynote LLC

Among the leaders in mobile performance is Facebook and service offerings like Instant Articles profit from this competitive advantage. Facebook’s native content format is said to load up to 10 times faster than an average mobile page.

The social network will also host the content entirely, which will then reside outside of a publisher’s domain, something which has raised fears among the publishing community, that publishers would lose control, some going as far as to criticise that they would give up too much of their core asset although there is no evidence that this might happen. Fact is, that participating publishers do not handover all content to Facebook. Instead they have to produce unique content, which works in this context only. While editorial control of the content still remains on the side of the publisher, future will show how reliable this partnership is, when articles conflict with Facebook’s terms.

A Facebook representative speaking at a VDZ event in Hamburg recently emphasised, that Instant Articles is still in Alpha, which means, that it is still subject to major changes. The interest in the media and news industry is huge and Facebook received a lot of requests from publishers trying to join the testing phase. But being in Alpha requires that publishers can offer enough own technical staff, to make adjustments quickly and to respond to changes within short time. Only a few publishers meet this requirement for now.

In case of Instant Articles, publishers would not only profit from short load times and mobile readiness. They would also benefit from Facebook’s power to distribute information among its huge audience base, which in turn would result in higher advertising revenue.

Peter Kafka of Recode writes that Facebook will let publishers keep 100 percent of the revenue for ads they sell on their hosted articles, and give publishers the majority of the ad revenue for the ads the tech platforms sells.

Business terms for Google’s new platform have not been determined, yet. Fortune cites a source, which says, that each participating publisher would create its own ads and keep the revenue. Given the problems Google faces in Europe we can expect the terms to be highly competitive. But the most interesting part of Google’s approach is that the aim is an open standard which would be in contrast to the proprietary systems of Facebook, Apple or Snapchat, which will force publishers to rely on their systems instead of the open web. It would also solve the load time problems of the majority of publishers’ sites leading to higher revenue while protecting “the original ads the publisher sold next to the story,” as Kafka states.

What publishers need to know about Facebook Instant Articles

What Facebook Instant Articles will mean for brands and publishers

Facebook Instant Articles appear in (some) feeds, but all the same questions await