Rival app Meerkat, which debuted at around the same time and offers a similar service, seems to have been eclipsed with Adobe’s Digital Index advertising report revealing that Periscope’s live streams are getting a lot more mentions on social networks than Meerkat streams.

This isn’t entirely surprising given that Periscope was bought by Twitter for an alleged $100 million back in March.

In a Medium post (also Twitter-owned), Periscope announced that a staggering 40 years’ worth of video is being watched by its users, every day. That’s a lot of content.

Such is Periscope’s popularity – and potential – that it has been used by some unlikely organisations. Police in North Dakota, for example, have been experimenting with it as a way of improving police accountability and communication with the public. Meanwhile over in the UAE, rather dubiously, it’s been blocked.

Periscope users catch a live stream within a 24-hour period and encourages engagement through likes. Importantly, the ‘high stakes’ element of live content means that the Twitter-owned app has a lot to offer brands in terms of real-time engagement, and it’s a chance for increased transparency.

With the public’s increasing appetite for instant gratification and media companies competing for unique angles on breaking stories, live streaming could prove to be the perfect partner for news companies. Whether it’s live streaming from newsworthy events (Kay Burley of Sky News conducting a ‘royal tour’ of the Buckingham Palace area while waiting for news of baby Charlotte’s birth), going behind the scenes or Q and A sessions, there’s huge potential for broadcasters here.

Here are five media brands already making use of the app.

The BBC’s sporting branch (@BBCSport) has utilised Periscope by engaging followers with live sporting reports. But at least for the present, the organisation seems cautious about implementing use of the app across the board – it’s mostly individual reporters using it. Jeremy Vine, for instance, was already trying it out in April, while Ros Atkins used it to report live from a big protest in Athens.

Also back in April, veteran DJ Tony Blackburn demonstrated his love for Periscope by showing his followers around the BBC HQ Broadcasting House via the app (and receiving a gentle slap on the wrist for doing so). 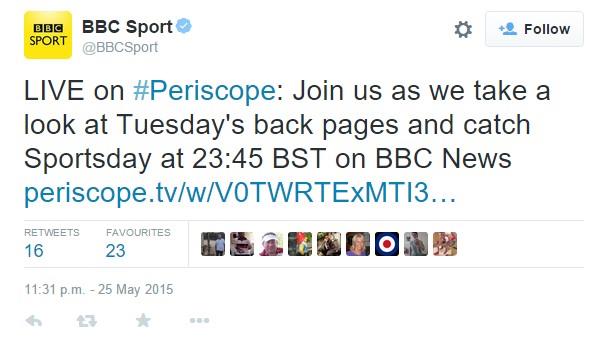 CNN – behind the scenes, live-reporting, Q&As

CNN Politics (@CNNPolitics) has been using Periscope to conduct some interesting, behind the scenes exploration of Hillary Clinton’s presidential candidate campaign. It’s also hosted some chats with CNN presenters and expert reporters about current affairs and topics of interest.

Like the BBC, streaming is mostly coming from individual CNN presenters at this point, rather than the corporation as a whole. The best example of this has been by correspondent Max Foster who continuously live streamed around the time that the second royal baby was born, interviewing royal-lovers on the streets and giving updates and tours of the area around the hospital.

The Next Web – live Q&As with staff

The Next Web CEO, Boris Veldhuijzen van Zanten, hosted a Periscope ‘AMA’ (ask me anything) back in June. Interacting with users via live video is an opportunity for journalists to expand on their ideas, as well as engage with their keenest of Twitter followers. TNW journalist Mic Wright was one of the first in their series of live chats, followed by in-house lead designer Alex Griffioen.

AMAs are a good strategy for enabling readers to directly connect with the real people behind a popular brand, which can otherwise seem faceless as we spend more and more time looking at our screens.

CBC – the Canadian equivalent of the BBC – has been taking Periscope for a spin of late. It has used Periscope for breaking news at the scene of an explosion in New York City, and the CBC Kitchener website used Periscope to live stream the mayor’s ‘State of the City’ speech.

CBC’s Michael Bolen, a social media producer for Social Media and Trends, told Poynter.org: “All these streaming services are also powerful tools for journalists at the scene of breaking news or watching a press conference. We’re always looking to give our reporters any and all tools that will help them tell stories in more immediate and immersive ways.”

He added: “These streaming services are clearly blowing up. People are using them. What will they become in the future? Who knows. But it makes sense to be part of that conversation, to be part of the process of shaping their use and to build audience on a new platform in the process.”

The City News entertainment account, @EntCity, is the corporation’s most active user of Periscope. They’ve been experimenting with Periscope at red carpet events, such as at the premiere of Man From U.N.C.L.E., as well as catching up with sportspeople such as tennis players Genie Bouchard and Milos Raonic at the Rogers Cup.

City News also runs a behind the scenes live stream during the day, “to give you an inside look into what goes on in our newsroom”. This is especially great for viewers with an interest in the behind the scenes workings of a media organisation. 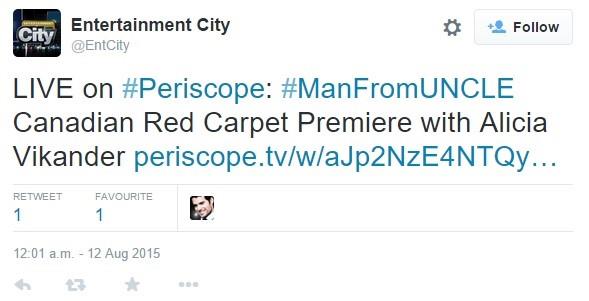 This piece was first published on the Digital Innovators’ Summit (DIS) website. The DIS is FIPP and VDZ’s (the German publishers association) annual event in Berlin, Germany focused on digital innovations within and related to the media industry. In 2016 the DIS takes place from 20-22 March. Discounted pre-agenda registration is now available.

Farewell to Flash: what it means for digital video publishers