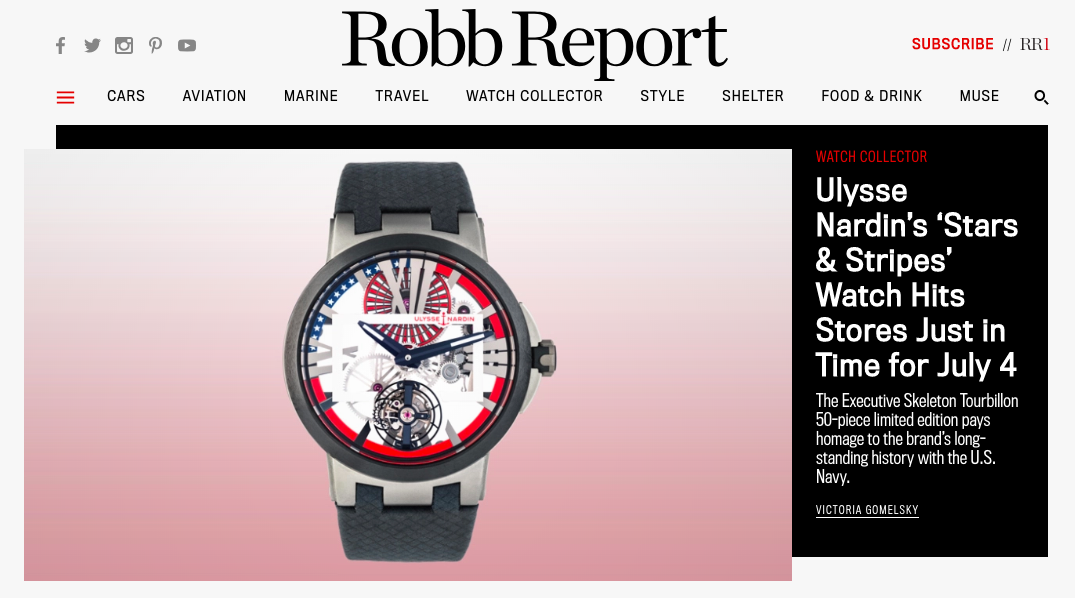 FIPP spoke to Croughton about his new role:

Congratulations on being named the new editor of Robb Report. Why did you sign on for the role?

It’s a wonderful role and a privilege to head up such a respected and recognised title with a genuine global reach. But what was exciting for me is that Robb Report is so much more than a magazine – it’s a business that connects with a sophisticated audience in print, on digital, and even in person through its extraordinary events programme. I can’t think of another brand that explores such a variety of subjects in such depth, across all channels.

How is Robb Report UK different from Robb Report in the US? What were some of the differentiating characteristics of the UK edition?

For the UK edition we had the opportunity to start from scratch, and ask what would a British Robb Report reader want. So, we worked really hard on a visual look and feel that would speak to the sort of person we wanted to find – someone who is media savvy, who travels globally, and who expects the best of the best. I think it had a real personality and attitude, and I think we can export a little of that to Robb Report in the US.

How will you grow Robb Report’s ownership of the luxury media space going forward?

Robb Report has been the leading voice in luxury for over four decades, and this past June it celebrated 30 years of one of its most successful franchises – Best of the Best. So, I don’t think there’s much doubt that the brand has a tremendous presence within the world of luxury – and that’s been reinforced in all the conversations I’ve had with the leading figures of the fashion world in Florence and Milan where I was recently for the international menswear shows. We’re building on that all the time: we’ve just unveiled Muse by Robb Report, a new magazine aimed at our female readership, which was a fantastic (and happened before I started, so I can say it’s great as it had nothing to do with me!); and our membership programme continues with the invitation-only RR1, which brings the pages of Robb Report to life through access to once-in-a-lifetime experiences.

Where will you take Robb Report’s storytelling and content creation?

The end goal has got to be for Robb Report to be an essential part of our audience’s lives, day in, day out. That’s the plan. And that means not just providing content but going above and beyond that. We’re fortunate enough to have an audience that is hugely influential, knowledgeable, and resourceful – and they’ve already invited us to be one of the few sources of information and entertainment that they trust. So that’s a great place to start from. From there, I think Robb Report as a brand has huge potential to grow in a multitude of areas, from retail to services, and for me that was one of the biggest attractions of coming on board.

What are some of the major trends, opportunities and challenges you see in the luxury media space?

One of the biggest challenges right now is just to be heard. There’s so much noise now; everybody is pushing content at you 24 hours a day. We’re fortunate that we have built-up this reputation for authoritative reporting, so people trust us – but we’ve got to earn that trust every single day.

There are a number of opportunities – I mentioned just now that I think Robb Report’s scope can expand into services or retail… we’ll be looking at that in the coming months, which will be interesting.

What is changing in the luxury media space?

Certainly, in the UK, the traditional media such as newspapers are making moves into the luxury space which means there are a lot of supplements, lots of noise, and lots of opinions. But there’s not that much authority and even less judgement. I see plenty siloed areas of excellence around luxury – whether that’s specialist boat titles or travel channels, but almost nowhere that you get everything together.

With the continuous evolution of the media landscape, what are your thoughts on staying relevant to audiences, on building habit and loyalty?

I think it’s a combination of everything we’ve been talking about already – the creation of authoritative and trustworthy content, with opinion and personality, served to our audience how and when they want it, capped by experiences and added value that they just can’t find anywhere else. If you get that right, you’ll be doing ok.