“While print is our heritage and our history, there’s definitely a lot more to us,” explained Jon O’Donnell, managing director, ESI commercial, speaking to a packed audience at the Protein Studio’s in London’s Shoreditch in early October.

He claims that ESI’s titles now reach 26 million people across the UK each month, 75 per cent of whom are outside London. During the Olympics the Independent had the biggest Facebook article anywhere in the world while the title now claims to be the biggest pure-play news website in the UK, experiencing growth four times more than Buzzfeed.

***Join us at FIPP and VDZ’s 11th Digital Innovators’ Summit (19-20 March in Berlin) for more on digital media innovations from around the world. Save hundreds of euros by registering now with our 2018 pre-agenda offer, available until 1st December 2017. Secure your place here***

Newly launched, ESI Live focuses on live events such as the Evening Standard’s Business Awards and Progress 1000 which identifies London’s most influential people.

Last October also saw the launch of ESI’s ‘Story Studio’ which creates content across various platforms using commercial journalists in key verticals, such as fashion, food and drink and travel. Nor is it just about written content anymore. “Video is now a huge part of what we do, not just for editorial but also from a branded content perspective,” explains ESI’s Jon O’Donnell explains.

Here we look at five of the most successful cross-platform campaigns which ESI has worked on over the last 12 months, comprising written text, images and video.

For this 12-month campaign ESI uses its Real Time engagement data platform to identify the stories or topics that are set to trend on a particular day. Once agreed, journalists then give these stories the humorous Kronenbourg treatment with articles ‘roadblocked’ with bespoke display advertising from the beer brand. Created in a two-hour window, the ads run for a period of between 48 and 72 hours. One recent example was a story about the solar eclipse with advertising showing two glasses of Kronenbourg with the line ‘The perfect glasses for the eclipse’. Another was about a new type of pink chocolate with the line ‘flavour of the month since 1664’. As a result of aligning the editorial content closely with the ads, Kronenbourg has seen improved conversion rates from its digital advertising. 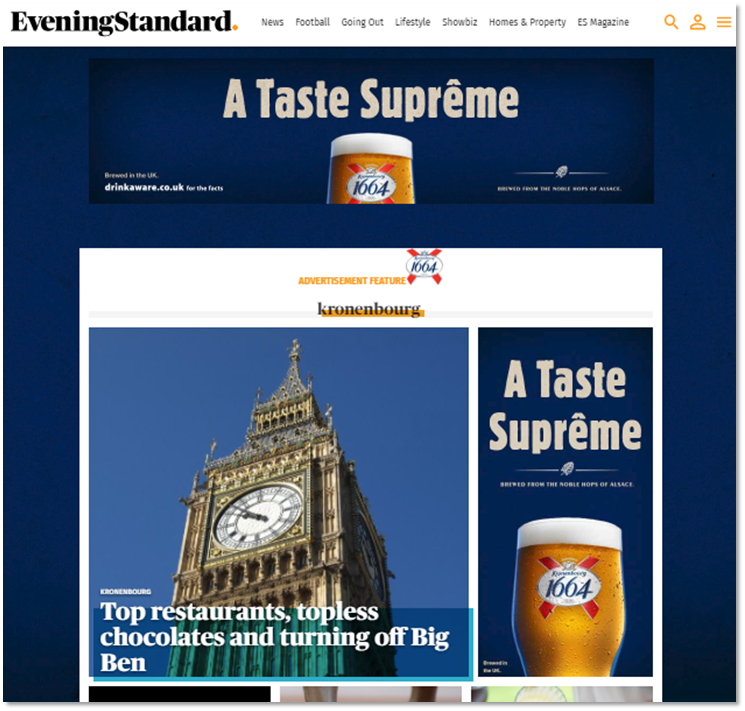 Fashion brand McArthurGlen, which has several out-of-town retail outlets, partnered with ESI during London Fashion Week (LFW SS17) last September. In addition, to a number of videos from the catwalk and behind the scenes interviews with make up artists and designers, the Independent and Evening Standard also ran several stories in association with the retailer. This included features such as Five Autumn Trends To Wear Now. Given the intensive nature of the event, which is held over five days, social media was used heavily to promote content including specially created GIFS as well as video content for platforms such as Facebook Live. Indeed, the Facebook Live content reached an impressive 32,000 viewers in just two days. 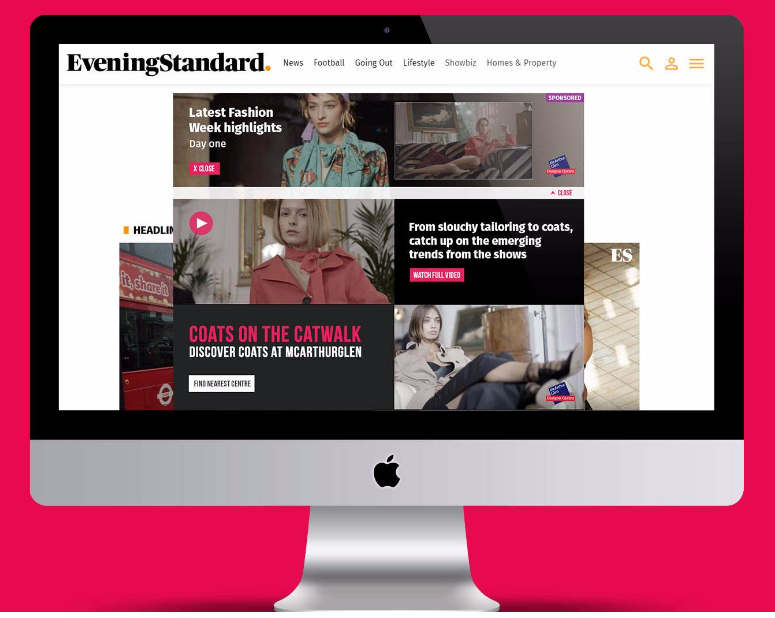 For its Drive Europe campaign, Eurotunnel Le Shuttle partnered with the Evening Standard to showcase various destinations in Europe which you can explore in your car. Journalists were sent to write about 10 of these destinations in total with four of them also incorporating accompanying video diaries shot by a film crew. For example, there was a group of 20 something friends who went to Mont St Michel and a family who drove down to to La Rochelle. A destination page was created on the Evening Standard website with a map highlighting various towns and cities of interest across Europe which readers could click on. Accompanying the articles and video diaries was display advertising for Eurotunnel with calls to action for booking channel tunnel crossings. The campaign, which ran for several weeks, was successful in showcasing the freedom of driving through Europe which Eurotunnel was keen to highlight. 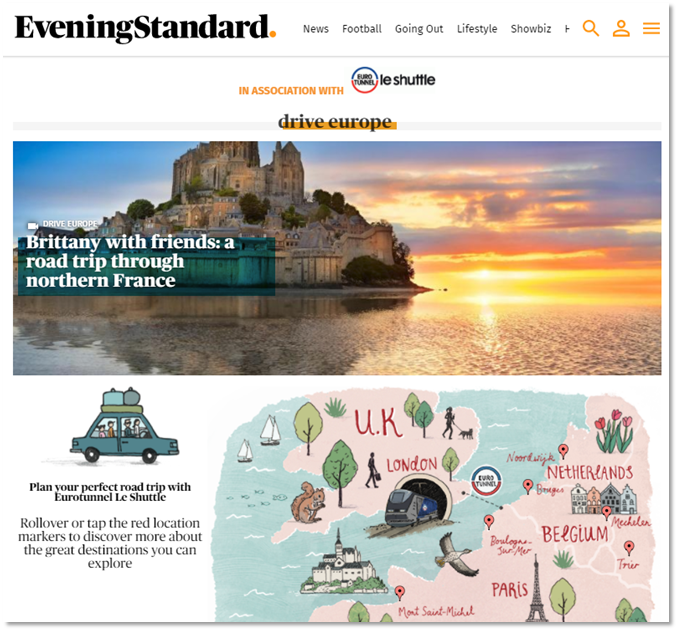 For its #LondonDrives campaign, which ran from April to June 2017, Addison Lee partnered with The Evening Standard to produce a series of innovative video-based interviews. An Addison Lee driver, who was media trained, was tasked with interviewing a number of people who were sitting in the back of his car while he was driving. These included former athlete Dame Kelly Holmes and fashion designer and entrepreneur Patrick Grant. He was fitted with an earpiece so researchers could prompt him with various questions while a film crew was tasked with filming from both inside and outside the vehicle. The videos were then uploaded to a dedicated section of The Evening Standard website, along with Addison Lee’s display advertising and promo codes to get discounts on booking with the cab firm.

Before the season six launch of Game of Thrones, Sky Box Sets wanted to encourage non-viewers to watch the first five series and kick-start a conversation around the show. Delivered across all ESI Media platforms, the campaign featured user generated content from independent.co.uk and standard.co.uk. Additional campaign elements included reviewer articles written by Game of Thrones fan and regular columnist Grace Dent as well as additional content written by a non-viewer focusing on one series per week. A season by season quiz was refreshed weekly online and in the ES magazine, and the campaign was supported by print and digital display activity with a cover wrap on launch day. 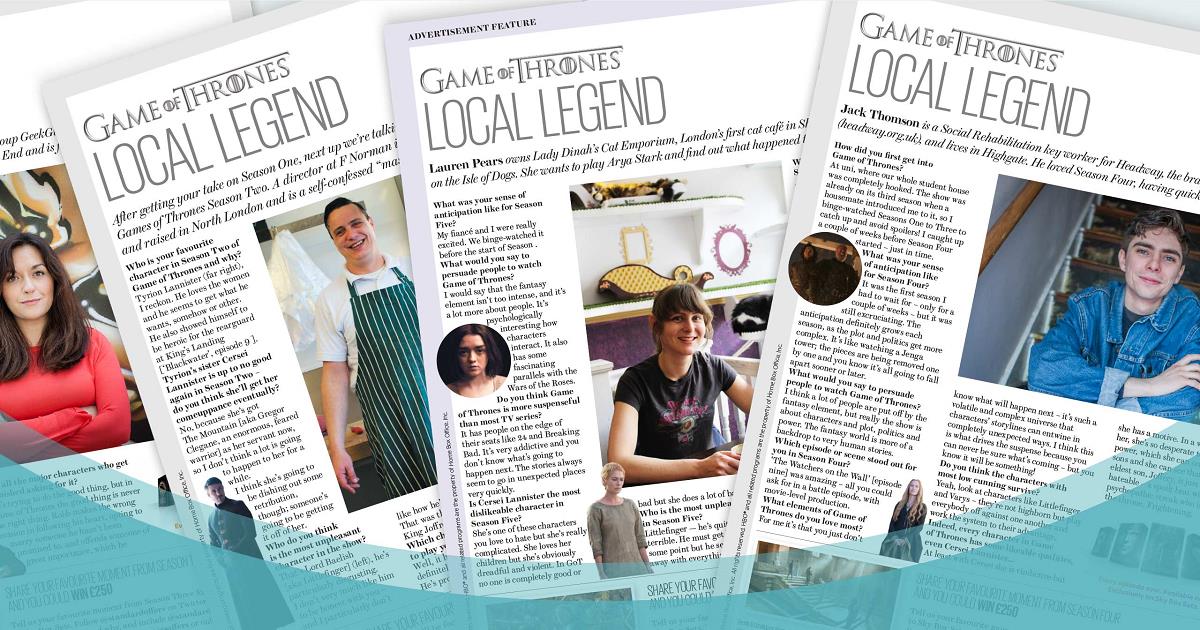 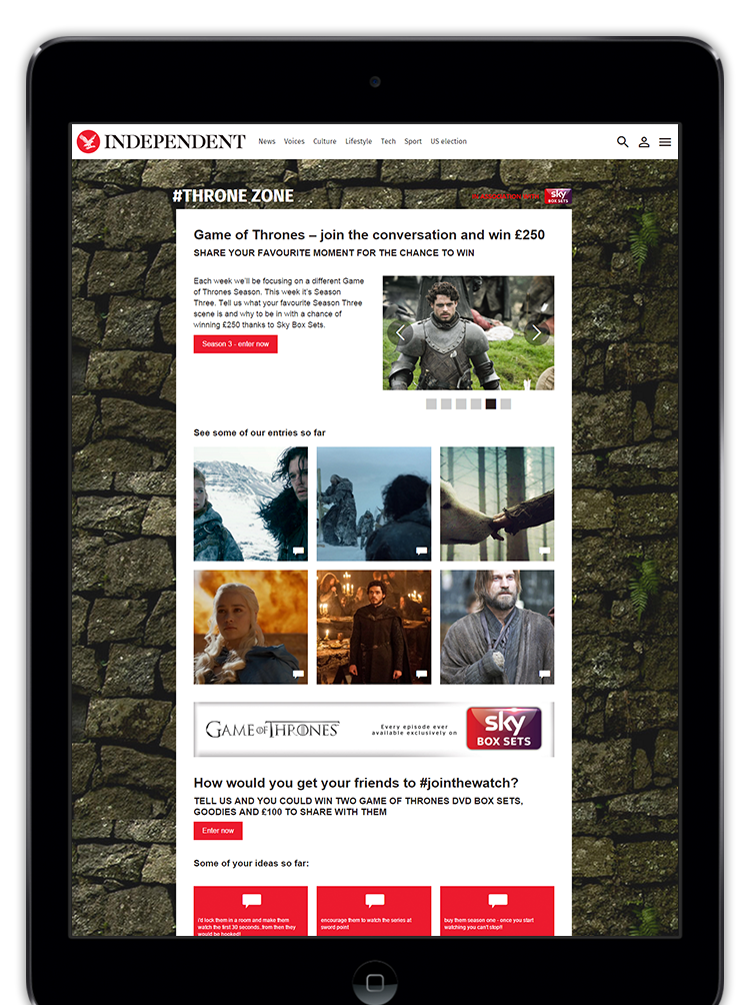 Interested in more digital media innovation stories? Registration for DIS 2018 (19-20 March in Berlin) is now available. Save hundreds of euros by registering with our 2018 pre-agenda offer, available until 1st December 2017. Secure your place here.

Taking the podcast to new heights – Saints of Somewhere