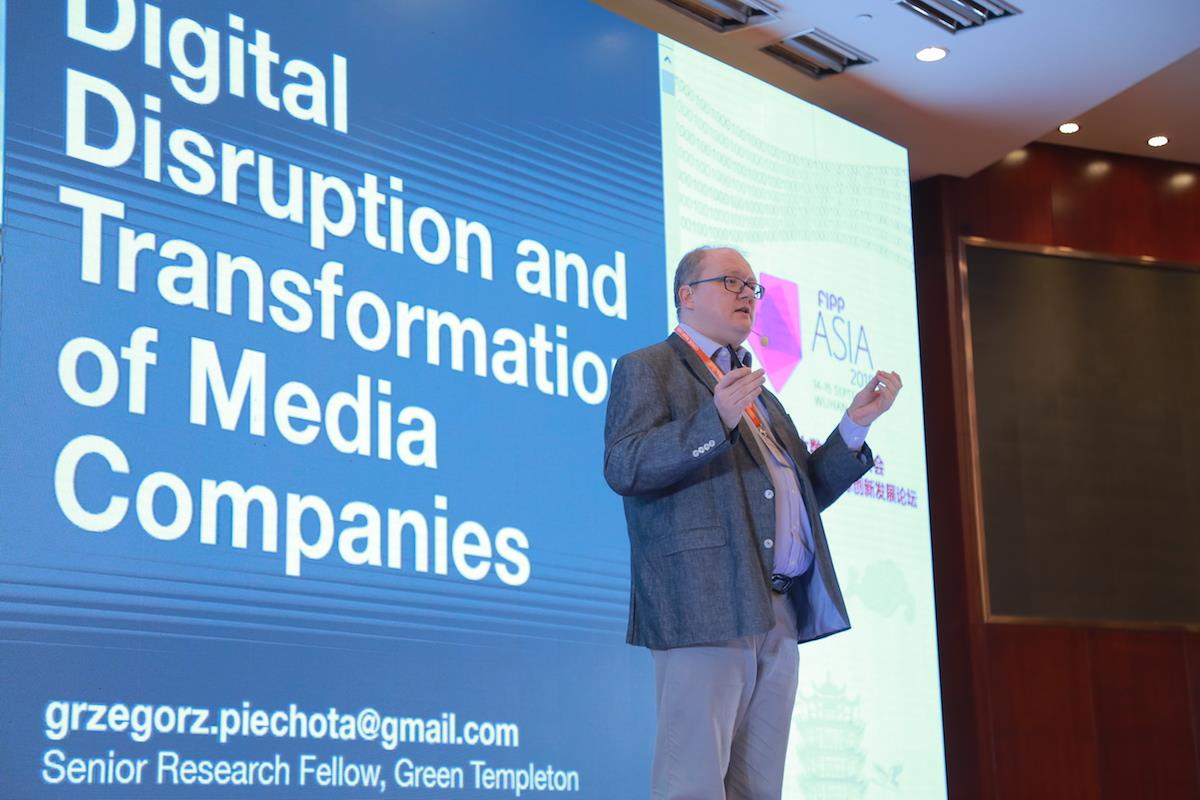 Greg Piechota has made a career working as a journalist across multiple areas of media. A few years ago, he moved into academia and started working at Harvard University, before beginning research for the University of Oxford in 2017. One focus of his work centres around the examination of how technology companies move into new industries, such as media, and take customers from the traditional players. In a recent talk at the FIPP Asia event in Wuhan, China, he looked at digital transformation and the media disruption it is causing in markets around the world.

“I have been a journalist all my life,” says Greg Piechota, Researcher at the University of Oxford and Harvard Business School, “working for the biggest newspaper, magazine, television companies and so on. Right now I find that the biggest revenue comes from cinemas, and that the most profitable product is popcorn – with a 98% profit margin.”

While publishers will be familiar with the revenue challenges associated with a drop-off in physical product sales, it is Piechota’s dissection of the current digital economy that is most striking. His research shows that 82% of global publishers say that display advertising remains their main business model, while 70% say that they use digital platforms like Facebook as a content distribution channel, despite the fact that in his words, Facebook is clearly a competitor.

“The vast majority of money online is actually taken by just two companies: Google and Facebook made up a combined 63 per cent share of the total digital ad market in 2017. In China, companies such as Tencent show similar dominance. What’s even more important is that the digital market is growing really fast and it’s taking money from television, but 95 per cent of the growth is actually taken by these two companies. This is because in the West at least, Google and Facebook have actually won the attention economy. They aggregated the biggest audiences and can therefore deliver the biggest audiences to advertisers.”

“In the West, from every dollar that an advertiser spends on advertising the publisher gets 30 cents,” says Piechota. “The rest is taken by different technology companies including things like trading desks, ad exchanges, and other intermediaries. A separate survey I have conducted shows that the average share of Google and Facebook contributions to publisher’s digital revenue is 5-7 per cent. I don’t have the numbers for China but if I were to ask who here gets more than five per cent from WeChat, Weibo, etc. who can raise their hands?”

Let the record show that no hands in the room were raised. 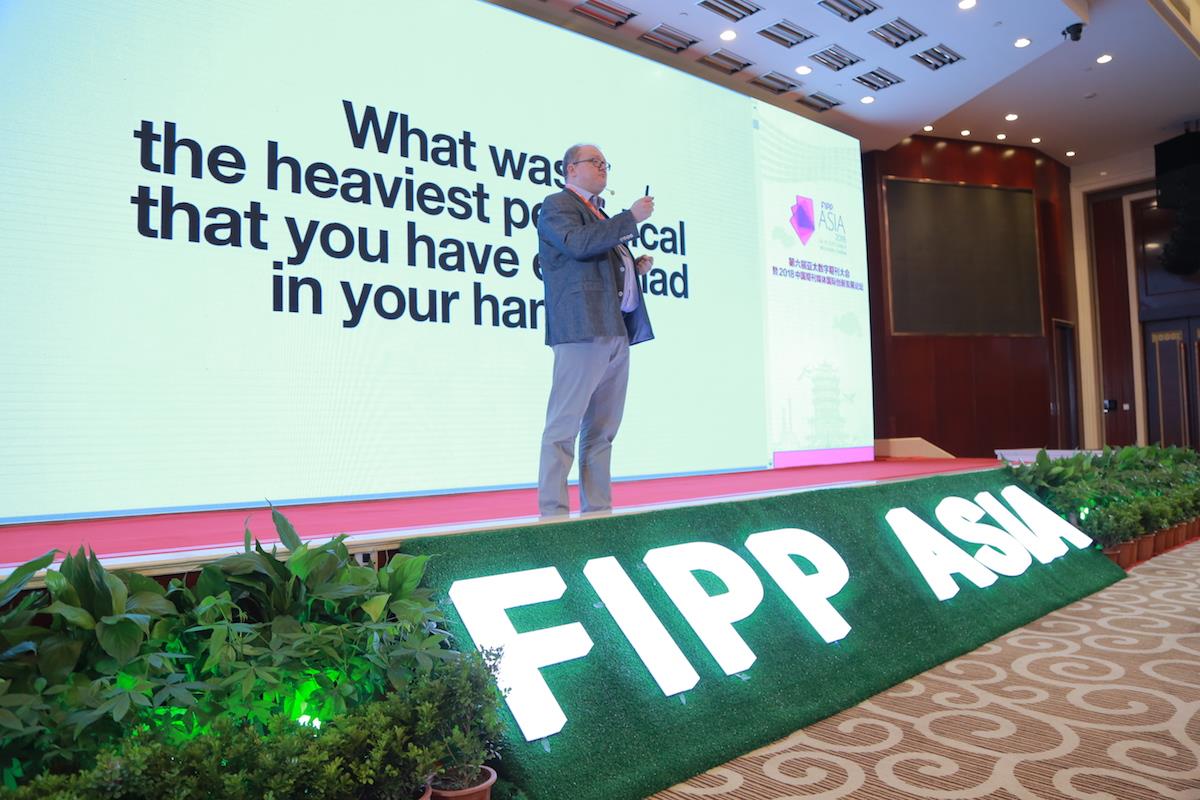 “You could think that maybe the biggest players get more money, but brands like The New York Times and the Washington Post, ABC, CBS, etc. get no more than 20 million [US] dollars annually from the four major platforms of YouTube, Facebook, Twitter and Snapchat. And while 20 million dollars may sound like a lot of money, remember that the newsroom of the NYT costs 250 million dollars per year!”

“When we look at consumer habits, and the publisher trends that follow them, three things are really driving change within the industry today.”

“The first is unbundling. Just unbundling news from marketplaces decimated the revenue of the newspaper industry in the US. This continues today to the point where you no longer even need to read an entire article. You can look at the part of it and if you are interested in the headlines you can use websites like Weibo. If you just want to see pictures, you go to WeChat. If you want to get comments, you can use social networks. You don’t need to go to a particular brand’s website to find further recommendations. Publishers are helping to unbundle their content and the more they do so, the less value it has.”

“The second wave of change we call disintermediation. In the past, if you wanted to publish something, you had to talk to the journalists. You could convince them to write a story or pay the publishing house for advertisements and have your content published in the periodical as an ad. But today, everyone can become a publisher! There is a nine year old boy who currently lives in California with his parents. They shoot a new video every day, when he gets a new toy and starts playing with it. This is actually the most popular children’s television network in the US: they have 14 million channel subscribers on YouTube. This compares to 400,000 subscribers to Cartoon Network and Nickelodeon with one million subscribers. So Ryan, with his parents, is running a bigger media company than the established TV stations if we talk about the size of the audience.”

“Thirdly, there is decoupling. You might remember this from your business class. The consumer purchase decision process, or a customer journey, or a purchase funnel – whatever the name, it’s the same thing.”

“If I want to learn about news, I would first decide what medium to use, e.g. online, TV, or print. Then I’m usually choosing the brand. What is important is that somebody then visits your website or an app and consumes content, because it is an opportunity to show us the ads and actually make some money. But these days you don’t need to think about the medium, because it’s usually your mobile phone. And you don’t need to browse around for content because Facebook has algorithms and AI that do it for you. So it is the consumer that is using a platform like Facebook or WeChat to minimise the time/cost and maximise the value that they get from a product.”

Piechota’s research has undoubtedly led him to conclude that the current industry model is a difficult one for traditional media brands. The picture we find is one of erosion, fragmentation, and a decline in monetizable products and centralised hubs. But through change we also find opportunity, and the researcher offers some practical solutions for refocussing publisher success.

“You can lobby for regulatory interventions from the government. This is what some people in Europe actually did. The European parliament for the so-called link tax, the idea being that no technology company can publish a link to somebody’s content without an agreement and of course the publishers think that they can charge for the agreement. Unfortunately, there have been countries in which such a tax was introduced – it was in Spain. The platforms just dropped all the news publisher from search. They just didn’t care – there are too many other publishers who wanted to stay.”

“So what about launching your own platforms? There are some publishers like Axel Springer, Schibsted in Norway, and some papers from South Africa that have managed to build their own platforms. But this can often be a winner takes all approach – we’re talking here how the leader can take 70 – 80 per cent a market. So maybe we should build alliances, so shares should all come together, share the data, share the technology and maybe even share customers? There are such alliances being launched all over the world in different countries. They are very new, one or two years old, and we don’t know the results yet. The thing is of course that they are competing for the remaining 30 per cent or 10 per cent, however you look at it. It’s not going to fund the whole industry.”

“Of course we know now that consumers don’t love advertisers, so the questions become who else can pay for content? Who derives value from the content? And the solution therefore becomes about new ways of monetising content. These can include subscriptions, content marketing hubs, ecommerce partnerships, and we have even seen some publishers straight-up asking for donations. We need more of this kind of business model innovation, because product innovation is simply not enough.” 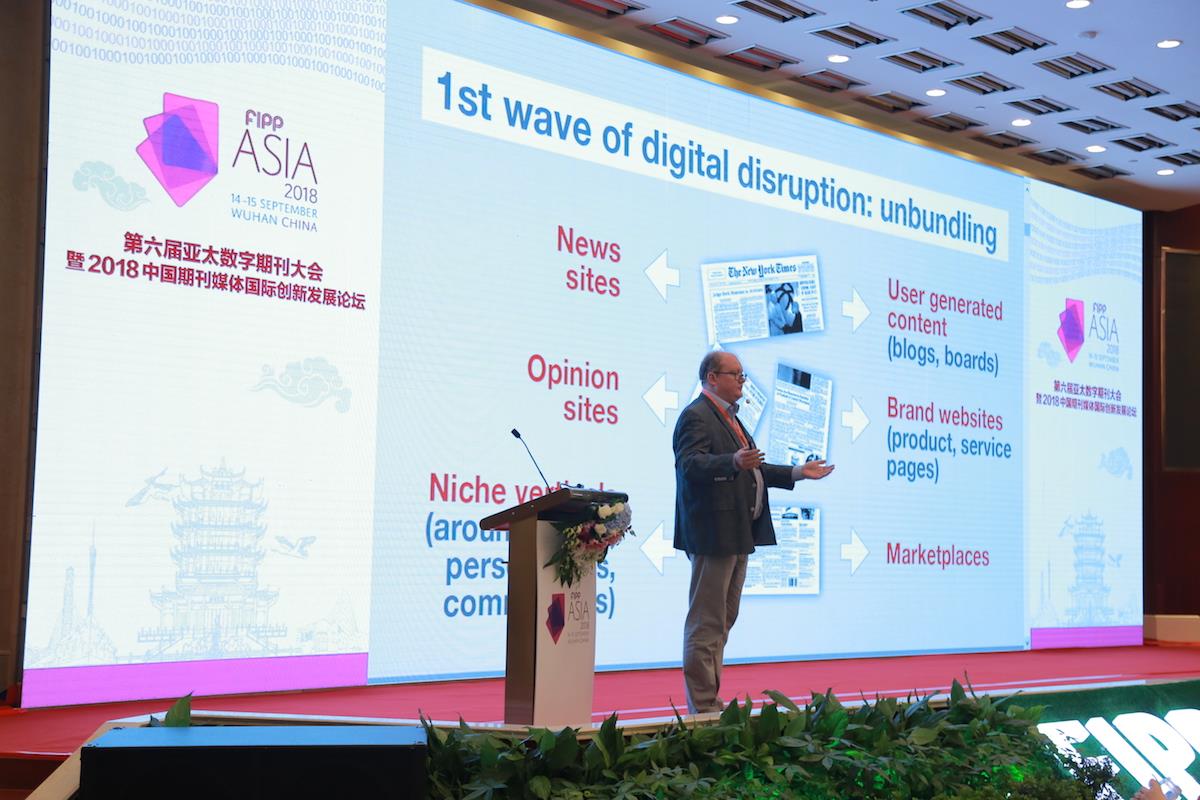 So what is? Piechota argues that the second stage of digital transformation goes deeper than simply updating your content and platform offerings. Instead, the very purpose of the company and the services it provides must be re-evaluated, to find its new place in the world. Within this advice, he offers a couple of real-world examples.

“The American company Belo Corp started to think that advertising is being taken over by Google and Facebook, but in fact people don’t spend that much money on advertising. When you look at company spending, they are spending increasingly more on so called marketing than advertising. They spend a lot of money on sales promotions, on events, they spend on discounts, sampling, services on their website, on website on content creation, on Facebook. So why not present yourself as an agency and media sales house that can actually take money from the customer and organise how to spend it? This is what Belo is doing. Now 40 per cent of their revenue is coming from this kind of integrated marketing business.”

“There’s another example from a UK company that is absolutely amazing. They used to be called EMAP. It was a magazine publisher. They used to publish magazines about everything from nursing to whatever and they just decided that it was time to focus on the business of consumer product retailers – the big businesses. They found out these people needed information to make better business decisions, but they no longer need that much journalism and stories and articles. They still have some magazines and you can read stories about what Tesco is doing, but actually most of the money is now made through information services that are sold in digital via a subscription. These are services like dashboards. It’s no longer about writing articles but providing the information that actually helps somebody to make better business decisions. Sixty per cent of revenue comes from subscriptions.”

For Piechota changing the business model, rather than the content offering, is the endgame. While the jury may still be out on this kind of approach, particularly within an industry that trades on its content, his parting words will undoubtedly resonate with media owners already wrestling with transition in digital: “You need to remember that marketing is much, much, much more than advertising.”