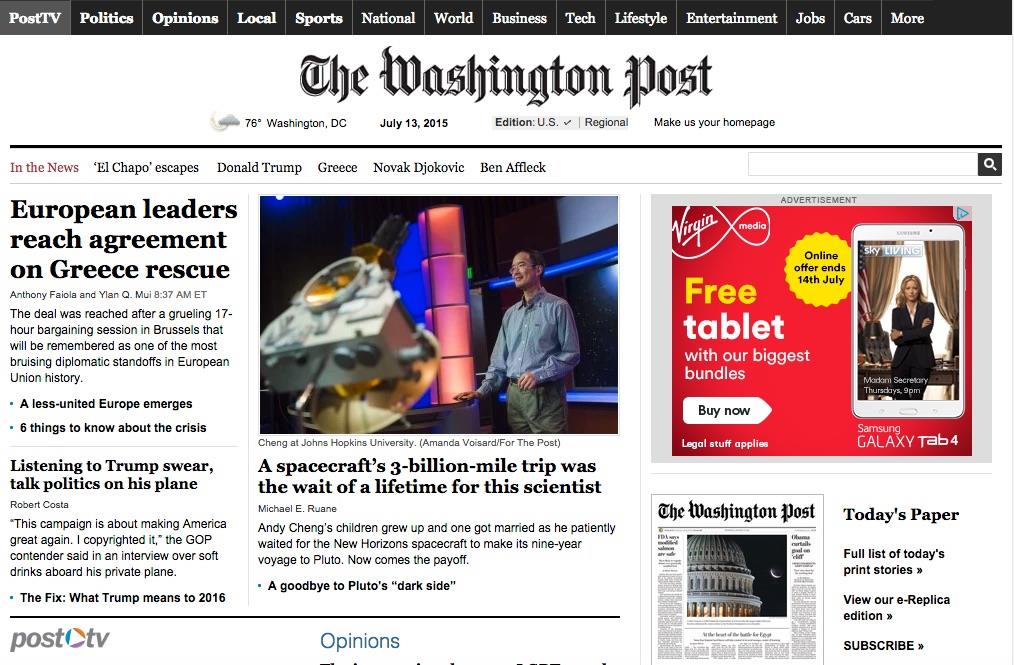 Fast Company recognises there has been a much greater focus on The Post’s digital presence in the Bezos era. In fact, the company is now living up to its goal of ”thinking like a digital product company”. This is critical because The Post, along with other traditional print publications faces declining print advertising and a readership that increasingly gets its news from online and mobile devices. According to Pew Research Center, weekly circulation for the daily newspaper sector has fallen 17 per cent over the past decade with a 50 per cent decline in ad revenue.

To ensure he had the right leader in place to shepherd The Post through this transition, Bezos hired Politico co-founder Frederick J. Ryan Jr. to replace Katharine Weymouth as publisher. Ryan’s marching orders were to build the reach of Post journalism through digital initiatives.

The next step was to invest in engineering excellence. In addition to building out its in-house engineering muscle through aggressive hiring, The Post also set up a design and development office in New York called WPNYC. Employees are focused on the future of The Post’s web platform and include designers, strategists, information architects, as well as experts in user experience, prototyping and development.

According to Steve Hills, The Post’s president and general manager, all of these investments are aimed at creating an experience that is optimised for mobile and for ”interestingness.” The goal is a simple user experience designed for stunning storytelling which is less work for the user to consume.

To understand how to create new and different ad experiences and solve for problems like viewability, The Post has also embedded engineers directly with the sales and news teams. And because The Post recognises content will be consumed on a variety of devices, engineers are leveraging big data to guide them as they work to produce a product that will be displayed across a range of platforms, including watches and other wearables, phones, tablets, PCs and giant screens.

At the end of last year, The Post preinstalled an application on Amazon Kindle tablets called Rainbow that offers twice daily curated selections of articles, photographs and breaking news updates in a magazine-style, tablet-friendly format. The goal is to expand readership by tapping into Kindle’s massive customer base and in exchange, provide enhanced content to readers. The application is currently available for free for six months and $1 a month thereafter. An ad-free version is available for $11 per month and a phone version will be available soon.

To help offset the cost of engineering innovation, The Post is planning to sell its ARC Digital Platform for Media, which leverages open source including WordPress, to local and regional newspapers in a software-as-a-service (SaaS) model.

In a nod to privacy and security, Bezos is now encrypting a growing number of sections of The Post to prevent government surveillance of readers’ interests, reading habits and potentially their political views. This is another way that the publication is demonstrating a deep commitment to its customers.

Clearly, the digital technology is only as good as the stories it tells. That is why Bezos has also recruited 100 journalists who excel in this new digital world. Focused outside the Beltway, these journalists are building broader national and international audiences while maintaining the journalistic standards that have driven The Washington Post for the past 125 years. And their work is heavily promoted on social networks.

To grow readership and advertising revenue, Bezos has partnered with more than 100 newspapers to give their readers access to The Post as part of their subscription. New readers have also been attracted by dozens of new blogs covering lifestyle, education, technology, health, and first person narratives, as well as expanded coverage of politics, sports, national security, and world affairs. These blogs are authored by a diverse set of writers and have driven massive traffic growth.

Measurement is built into the fabric of The Post’s operations today. Everything is measured including content quality, technology quality and performance, and customer complaints. The Post uses these measures to assess whether it is delighting customers by providing the best content and creating the best experience possible.

The future is still uncertain

The future of print journalism and The Washington Post has yet to be written. Even as it thrives in the digital age, The Post is still plagued with finding ways to replace its shrinking print advertising revenue. But with a culture of innovation and experimentation, and a willingness to try new business models, The Post stands as a model for other content providers who hope to reinvent themselves for the new age.

Is Vessel YouTube’s next big challenger?