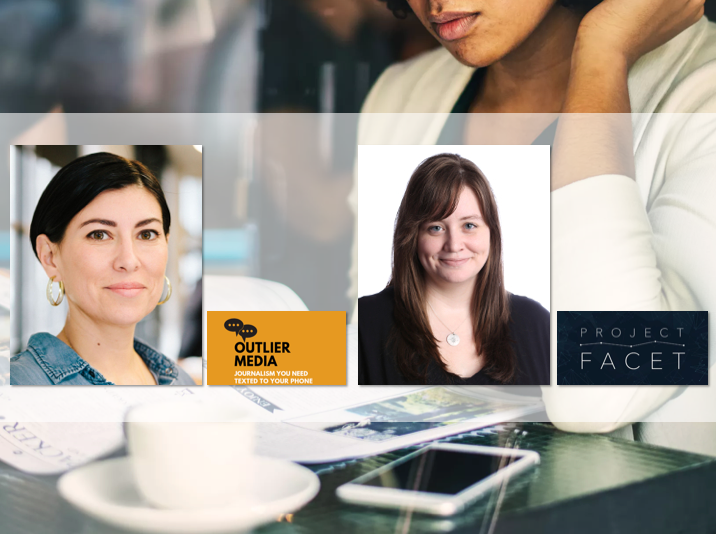 She soon realised that most news organisations in Detroit served higher income groups living in the outer suburbs of the city. Lower income groups in the inner city, where up to 60 per cent of people did not have access to broadband, were being ignored.

“Low income news consumers are being under-valued as a news segment because advertising models under-value them,” she said. “But these communities hunger for news in the same way any other news segment does.”

Alvarez emphasised that while news media should play an important role in keeping city officials accountable to regular people, information gaps created by the scenario described above caused an inevitable lack of accountability. To counter this, Outlier set out to build a media model that could deliver high value information directly to news consumers by means of text messaging. They also wanted to offer every user the ability to connect directly with a reporter.

First, said Alvarez, they needed to understand where the information gaps were. “We wanted to supply information not based on what we think people needed to hear but what they actually asked for.”

They started out by studying public data, using web scrapers, looking at public complaints both locally and federally, as well as data acquired from non-profit organisations. This allowed them to identify what the most important needs of the communities within the Detroit inner city were. Housing and utility problems stood out, hence the fact that they started to build their service journalism around these two issues.

Today they send text messages to 2,500 people a day and talk directly to at least 200 users a week. These conversations allow them to discover important news trends and emerging stories that would not have been discovered through traditional news reporting practices. These stories are then offered to, and used enthusiastically, by traditional publishing platforms (including newspapers, radio and TV). By offering the content Outlier intentionally “redistributes the watchdog function”.

As examples, she referenced tax foreclosure practices in Detroit where people who rent properties can be evicted from homes when a judge issues foreclosure judgments on homes with unpaid tax debt. This year more than 45,000 homes were subject to foreclosure with renters who are calling and texting Outlier in a panic to receive relevant information about their rights. Similarly there are huge accountability gaps around utility service delivery in Detroit with electricity cut for outstanding accounts owed by property owners, a practice that is illegal.

“We are able to give most of the Detroiters that we talk to the information they need. We expose corrupt systems and practices to keep authorities accountable.”

Accountability is also at the heart of Project Facet, an open source project to help newsrooms manage the multifaceted challenge of planning and executing collaborative projects across different platforms with other media partners. Heather Bryant, founder/director of Project Facet explained that many newsrooms drop important stories because they simply do not have the time, money, people or resources to pursue these further. If important stories are not being reported on, it creates a vacuum in which responsible parties are not being held accountable. “Every journalist should ask themselves: ‘What was the last story I could not cover?’ If it was because of resources, collaboration with other journalists and newsrooms is your best opportunity to be able to cover it. I firmly believe the future of journalism is collaborative.”

Yet, she warned, there remains an underlying problem to collaboration in journalism. “Newsrooms, traditionally, have not been designed for collaboration. Yet, we are not doing our jobs in that same competitive world any more. We’re working in a world where the stories are often larger than any one newsroom could do alone, where exposing audiences to stories and perspectives from other parts of the country and world is more important than ever, where a lack of diversity in our newsrooms is a serious problem and where our competition isn’t truly each other, but every organisation, company, politician or government that now publishes on the same platforms we do but with none of journalism’s responsibility to the truth.”

To create an environment for collaboration, Project Facet has set out to develop the right infrastructure for this by building a platform that brings functionality to collaborative projects between newsrooms. “We need the right tools to address our challenges. Facet is a part of the solution, by providing the space and shared resources for collaborative work and helping organisations and individuals foster collaborative relationships and connections between people doing the work of journalism.”

Ultimately, she said, collaboration increases the quality of journalism and allows for journalism to be done for communities, and not merely about communities – the very basis of service journalism.