Here VGTV’s editor and CEO Helje Soberg explains how the company’s has grown quickly, what its key ways of working are and how it sees online video in the future.

Helje will be expanding more on VGTV’s strategy at the DIS in Berlin in March 2018.

Explain a little about VGTV? Where did the idea come from and why did you create it as a separate company?

VGTV was established as an independent company in the autumn of 2013. It now has 69 employees. Our content strategy rests on three pillars; news/breaking news, reality entertainment programmes and high quality documentaries.

Why a separate entity? The main benefit is that this model enables us to be fully committed and dedicated to innovating storytelling on video. VG has also had success establishing startups as independent companies (first VG.no, then VG mobile and now VGTV).

How do you explain your meteoric growth?

We are moving towards a more visual society. We are experiencing a fundamental shift in how news is consumed. We see a higher demand for video especially around breaking news. That makes sense, because that’s often highly visuals news. For VG it’s essential to succeed with online video if we are to keep and strengthen our number one position as the largest online news site in Norway. The terrorist attack in Belgium last year was the first time we documented at major breaking news story with live images before still images. Now this happens all the time.

VGTV is now achieving higher advertising revenues than your print paper? Why has it grown so quickly?

The social platforms are changing the way people consume content. Video drives engagement and time spent, so it makes a lot of sense for the advertisers to embrace online video. The ads are effective. What most brands have done, however, is to place their TV ads on the internet. This does not work well. We are just now starting to see publishers innovate and deliver creativity around better products. For us in-house expertise has been essential as it has enabled to create more user-friendly video-ads.

VGTV has reached a couple of important milestones this year. March was the first month VGTV’s ad revenues surpassed VG print ad revenues. April was the first month VGTV was profitable. VGTV improved its financial results (EBIT) with approximately 48 MNOK in 2016 compared to 2015. YTD September 2017 VGTV has improved its financial results (EBIT) by 26 MNOK, which is an increase of 69 per cent compared to the same period last year. 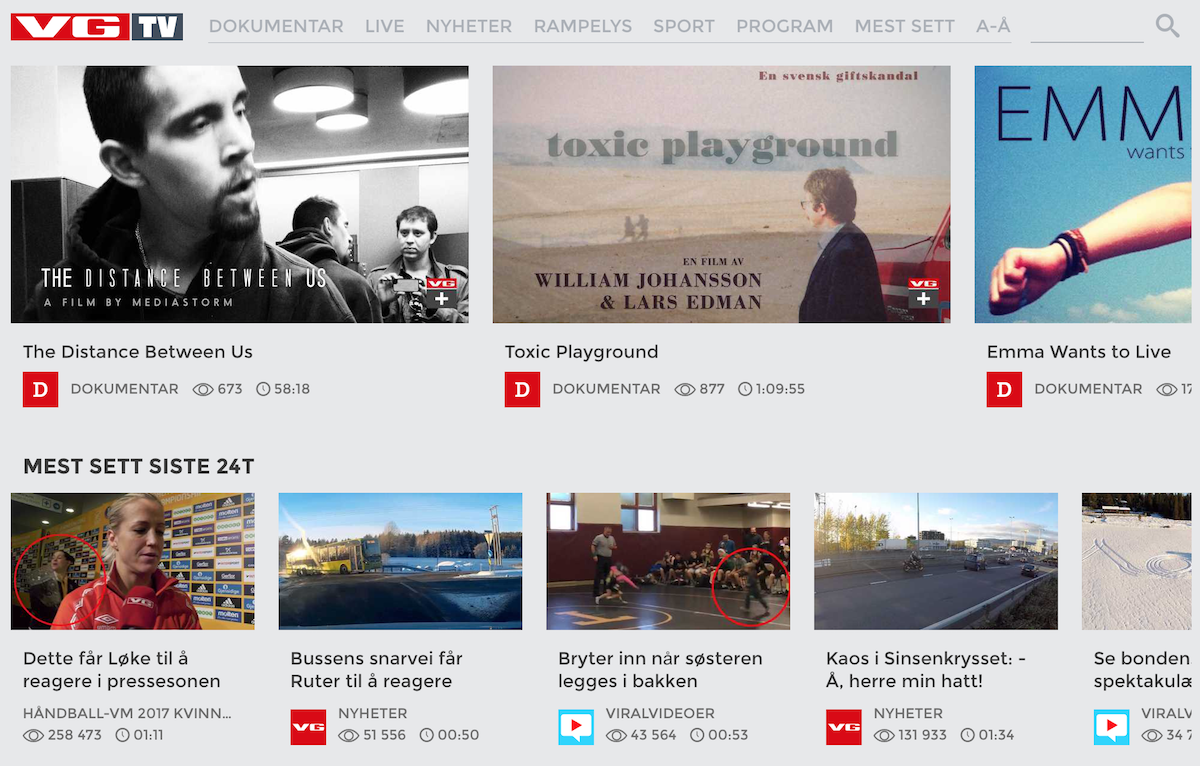 And what are the main sources of revenue?

Are there any emerging revenue sources you are experimenting with? Or, for example, could you incorporate ecommerce or subscriptions into VGTV’s offering?

The last year more than 300 high quality documentaries have been incorporated into VG’s premium product,  VG+. This has generated more than 16,000 subscribers, which is much more than expected.

How closely do the video and website/print teams work together?

Very closely, especially with breaking news. We also share the same office. We clearly make a much stronger team when we collaborate.

How do you work with the various social platforms? Are there any issues with working with them? Are they integral to VGTV’s future?

We have a dual strategy of destination and distribution of content. Distribution is important, but being a destination is paramount. It’s important for us to keep our position as a popular destination in peoples’ lives. If you are able to be a destination – a platform, you have a relationship with those people. It goes without saying that the value of this is high. Today 80 percent of the traffic to vg.no is direct traffic. Having said that, we  do publish much content on external platforms. This builds scale and brand and is a good way to interact and engage with the audience. We are constantly working on optimising a strategy for external platforms.

VG has been on Snapchat’s Discover since the end of January 2017. Six VGTV-employees are working full time making 11 snaps/stories a day (news during the weekend, and more in-depth stories in the weekend). This has been an opportunity to challenge our traditional storytelling, not just be a place to distribute content. We like Snapchat as a place to tell stories, and we use the insight from Snapchat to develop the storytelling and user experience on VG’s own platforms. Working on a mobile exclusive platform made it clear to us that we’re still too desktop focused when producing content on VG.no. On Snapchat we are forced to deliver a mobile experience, and we learn a lot about how to reach and connect with a younger audience.

Snapchat Discover is still an investment-case for us. We need to monetise it better than we do today. It remains to be seen how easy or how difficult this will be. There’s more on this here.

What advice would you give to other publishers looking to expand into video production?

There is not a single answer. For us online video has been a great opportunity, but this is still very much in development. We are probably just scratching the surface of visual storytelling in digital forms. First of all, being a publisher it’s important to have several revenue streams. Be creative and experiment. Try things out! The future is not one model, many models are going to work.