A ‘crisis in trust’

The 2017 Edelman Trust Barometer, published in January this year, reveals a “crisis in trust” around the world in four key institutions – business, NGO’s, media and government – with media and government distrusted by more people than trusted. See the Edelman executive summary here and the full report here. 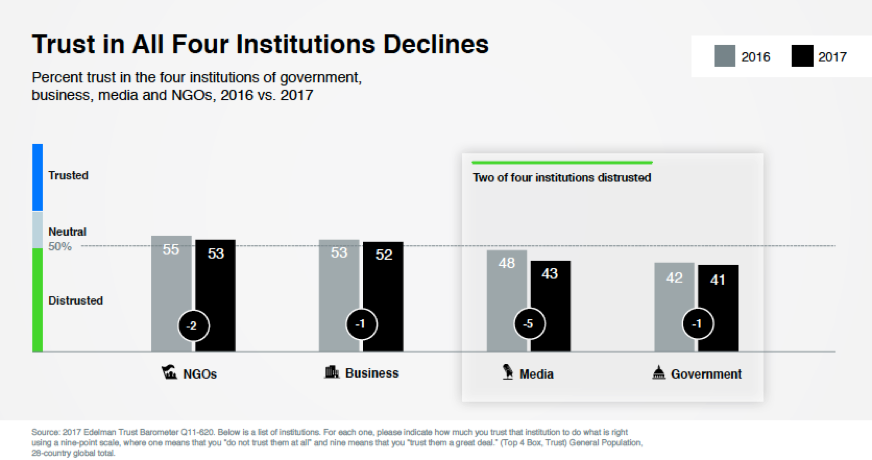 According to Edelman, there is “a direct link between trust in institutions — or the lack of it — and the populist movements that have led to the overthrow of established governments and treaties in multiple countries over the last year.”

Adding: With trust deteriorating, belief in the system fails, best evidenced by populist anti-establishment sentiments during Brexit and the US presidential election in 2016. Edelman highlights the following characteristics, which are fueled by “concerns becoming fires”: 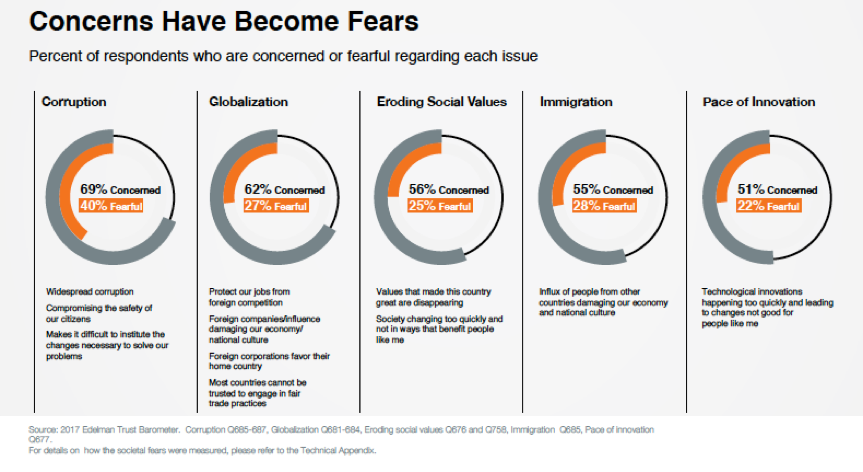 In the introduction to the report, Edelman says “to rebuild trust and restore faith in the system, institutions must step outside of their traditional roles and work toward a new, more integrated operating model that puts people – and addressing their fears – at the centre of everything they do.” 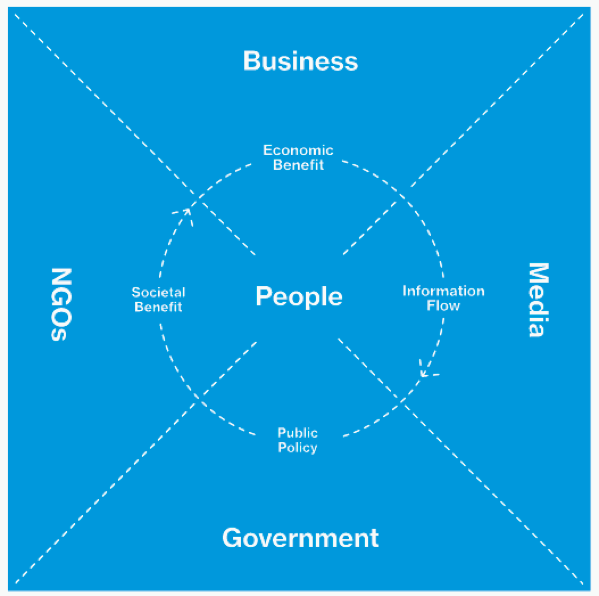 For media, in a world very different from a year ago, the warning signs are stark. According to Edelman, media is distrusted in 82 per cent of countries included in the report, and is at an all time low in 17 countries. In most instances, trust has dropped year-on-year. 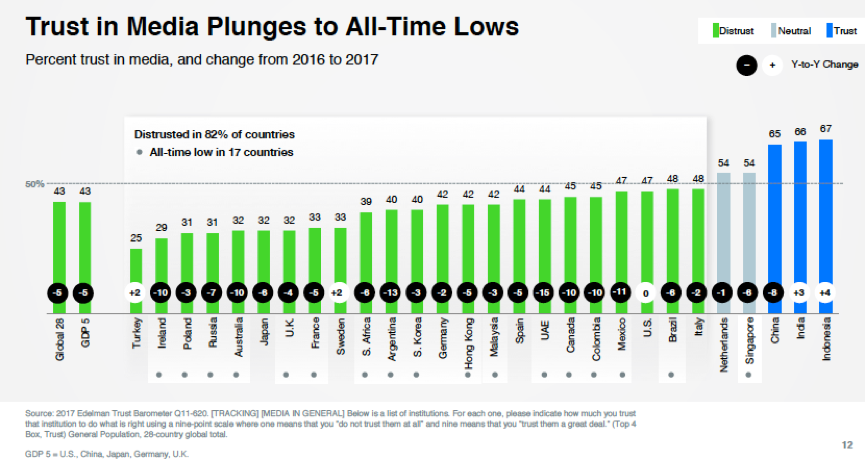 In turn, a separate Gallup poll, released in September 2016, shows “Americans’ trust and confidence in the mass media – ‘to report the news fully, accurately and fairly’ – has dropped to its lowest level in Gallup polling history.”

According to Gallup, 32 per cent of Americans said they “have a great deal or fair amount of trust in the media. This is down eight percentage points from last year.”

In the US, in the last week or so alone, President Donald Trump referred to his “running war with the media” at an address at the Central Intelligence Agency.

Trump chief strategist Steven Bannon said, “The media should be embarrassed and humiliated and keep its mouth shut and just listen for a while.”

Former House Speaker Newt Gingrich told a meeting to “just call the media propagandists” instead of “pretending these are reasonable people … no, they are our opponents. They, they’re people who despise us. That’s a fact.”

Fueling “anxiety and distrust,” according to Edelman, is the “emergence of a media echo chamber” that reinforces personal beliefs and shut out opposing opinions.

“For the first time, this means ‘a person like yourself’ is now as credible of a source for information as a technical or academic expert… In this new world, the hierarchy of traditional sources have been upended.” 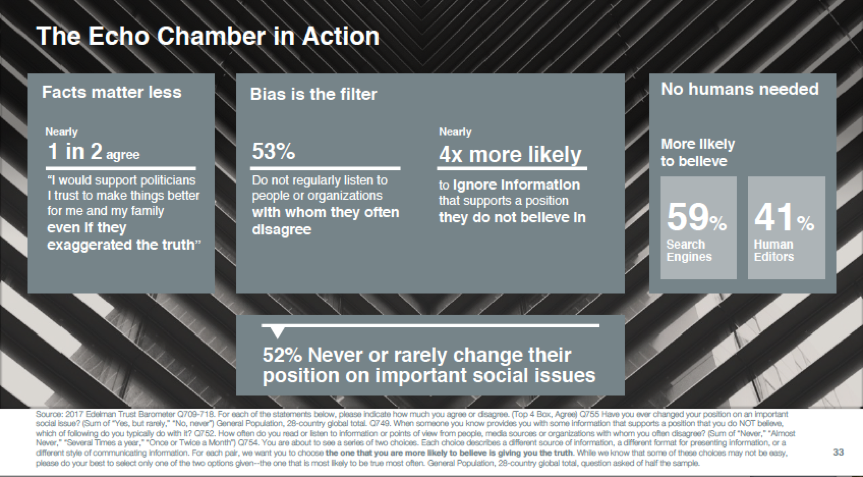 Within this gloomy picture, Edelman, however, shares some pointers to consider:

If you’re in media, get out of your very own echo chamber

Aroon Purie, chairman and editor-in-chief of The India Today Group, told FIPP he believes one of the problems is the extent to which media have become polarised. People “identify them with a particular party, ideology or individual”. Additionally, of late, they have been “wrong on the outcome of too many events – Brexit and Trump’s victories” are cases in point.

According to Aroon, it’s an imperative for media more than ever to remain “non-partisan and practice journalism without fear or favour.” They need to get out of their own echo chambers or filter bubbles, where opinions are formed and enhanced by like-minded peers. “We need our ears closer to the ground and not just exist in our own echo chambers with our peers.”

As media, “we then need to do what we do best. Practice good journalism, not sensationalise” by not presenting “the full picture”. Moreover, media “must expose and shame those who promote obvious falsehoods and ‘alternative facts’”, in order to win back the trust.”

‘Fair and non-partisan, but not neutral’

John Avlon is the editor-in-chief of US-based news site The Daily Beast. He says “trust in media has been on the decline for decades – and not coincidentally this decline has coincided with the rise of partisan news. Fueled by the fragmentation of the media and the innovations of the Internet, it has allowed citizens to self-segregate into separate political realities. The result is a Tower of Babel in the civic square, which undercuts the concept of objective facts and the assumption of goodwill between fellow citizens.

“Distrust in all institutions grows, including and perhaps especially the media, which can become a casualty in the larger culture wars. We need to unapologetically push back on those trends.”

Like Purie, Avlon believes media need to focus “on restoring our reputation for independence, real journalism reported without fear or favour.” At the same time, news media should not “labour under the illusion that this will win everyone over” and “value the standard of fairness in our coverage.”

At The Daily Beast “that means being non-partisan, but not neutral – being willing to hit both sides as the facts demand, without slipping into the trap of ‘on-the-one hand, on-the-other’ coverage which can lead to a muddied moral relativism between facts and opinion.

“To that end, I believe news needs to do two things right now: call bullshit and make important stories interesting. We need to fearlessly assert the idea perhaps best articulated by U.S. Senator Daniel Patrick Moynihan: “everyone is entitled to their own opinion, but not their own facts,” says Avlon.

Marcus Rich, CEO of Time Inc. UK, shared some of the company’s own research into trust in media, with particular focus on magazine media.

First, “although social media and other sources are seen as less reliable (3rd party research) and lingering scandals still taint the media (such as the Leveson inquiry into mobile phone hacking in the UK), the good news is that it is not all media, as there is a huge variation in attitudes towards individual news brands. Magazine media brands, which traditionally have high levels of trust, are also less affected.”

A Time Inc. AdSense study showed this trust (in magazine media brands) transcends generations. Notably, it shows that a more thorough approach to writing – slower journalism if you want – play a role in developing trust.

Said one commenter in the AdSense study, “A lot of research goes into content of magazines… and is therefore more accountable for its comments and observations.” Other observations included:

1. More informative, aimed at specific groups of people, can give unbiased opinion

2. Magazines are well researched and have useful tips and advice from experts

3. They seem to have a more open and honest way of researching things

This trust not only refers to content, but to advertising in magazine media too, as evidenced by a number of studies over the years including the AdSense study. Furthermore, according to another Time Inc. study Connected Consumers, this trust transcends platforms and new ad formats.

According to Rich, magazine media therefore could “provide a blue print” for other media. He offers seven steps to consider (also think back here to what Edelman said about ‘the rise of a person like yourself’):

1. Really know your audience: It’s all about them, their passions and what makes them tick

2. Build and maintain a strong brand, which is respected, sought after and emulated

3. Provide brilliant, expert content and invest time and expertise (this includes employing experts) in doing so

4. Capitalise on the resultant ‘halo’ effect, where trustworthiness in the brand rub off on advertisers (you have to make money after all to sustain your journalistic endeavours)

5. Target how you talk to your audience: Capitalise on readers/viewers who are receptive and address their issues, concerns and wants – in their style

6. Engage them in bespoke and authentic ways

7. Do this across all brand extensions and platforms