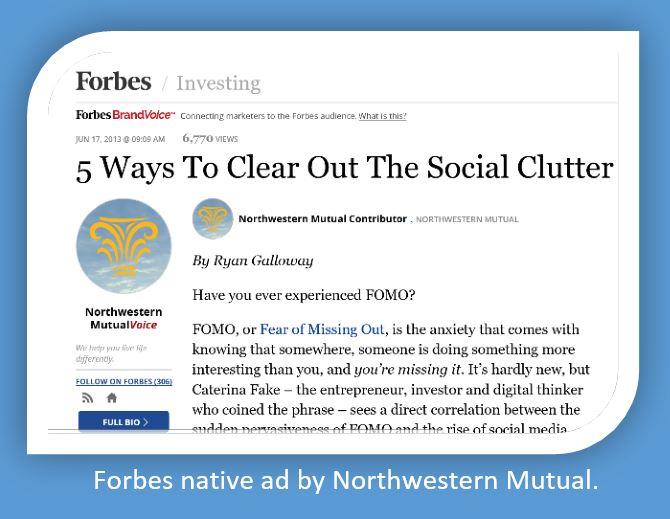 Often referred to as sponsored content, native advertising is paid media promoting a brand that is situated to emulate editorial or ‘natural’ content on a media site.

Native is hot. The largest social platforms in the world have long monetised with native ads, including Facebook, Twitter, Instagram and Tumblr. Over the last five years, the publishing industry has increasingly followed suit, as companies like Time Inc., Forbes, The Wall Street Journal and The New York Times have integrated native ads into their desktop and mobile environments.

Native ads are lighting up both performance metrics and ad budgets. According to eMarketer research, consumers are 25 per cent more likely to look at them than standard banners, and they register 18 per cent higher lift in purchase intent. It’s no wonder eMarketer is predicting that spending on native ads will reach $5.7 billion in the US alone this year.

‘Traditional digital advertising has become wallpaper. It doesn’t improve anyone’s experience on a site, and readers, myself included, pretty much look past it. … Brands that have a strong point of view and great partners to help them express it can enjoy massive engagement [with native],’ GE’s head of media strategy, Jason Hill, told eMarketer.

And consumers have quickly gotten used to finding native ads throughout their favorite publisher sites – after all, 70 per cent of people say they’d rather learn about products through content rather than through traditional advertising.

The past year has brought both calming and jarring changes to the native ads space. Here’s a view to some of the expected developments of 2016.

Publishers will adapt to the new FTC rules. In December of 2015, the FTC released guidance warning that digital native ads appearing in news feeds of publishers’ sites, social media posts, search results and email potentially can be considered deceptive unless advertisers clearly disclose the ads are, in fact, ads. The new guidance requires companies to label native ads that potentially could be mistaken for editorial content with terms like ‘advertisement’, ‘paid advertisement’, or ‘sponsored advertising content’.

Marketers seemed to respond with a collective shrug, signaling that these new rules just make official the judgement followed by good advertisers all along.  Laura Janness, chief strategy officer at agency Barton F. Graf 9000, summed up this sentiment, telling Fast Company, ‘As an agency, we fundamentally do not believe in tricking people to engage with the content we create. Instead, we believe in creating content people want to engage with. Great advertising doesn’t have to disguise itself.’ 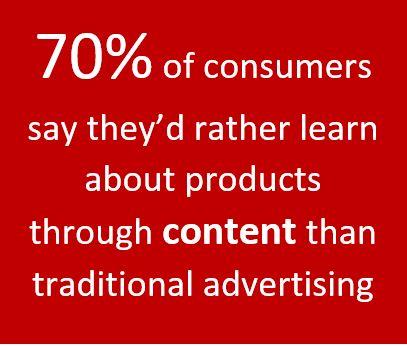 Native video – This year may see a rise in in-feed native video, driven largely by the silent autoplay videos that have become common on Facebook.  Justin Choi, founder and CEO of native advertising platform Nativo, told eMarketer, ‘I think people will start to realize that native is a placement and video a form of content, and that the two actually work together. Right now, [most publishers] are at the risk of getting caught flatfooted, and Facebook is taking a huge chunk of the dollars before publishers really get up and going.’ He believes slow-to-evolve publisher policies rather than technical capabilities are currently holding back adoption of this format.

Programmatic native – Models continue to shift.  Brands once relied exclusively on publishers to reach their audiences, and publishers, in turn, monetized their properties by building and grooming their audiences with advertisers in mind. The growth of social media has of course disrupted these paradigms, and brands became publisher-agnostic in their approach to marketing, leading to the rapid growth of highly efficient programmatic channels.

Programmatic native hasn’t taken off yet, but brands are starting to explore automation of their native ad relationships with publishers. This advance would help address one of the current gaps of native: scale.

Page views will persist – Advertisers prize engagement over clicks, but page views will remain the default metric this year.  However, attention metrics, which measure engagement, will move closer to the mainstream.  One good example of this is the publisher Medium building its ‘Time to Read’ measurement into native ad sales.

Infinite scroll use will expand – More publishers who see home page traffic decline will likely embrace the trend of ‘infinite scroll’ where bottomless pages of articles (both organic and native) encourage users to keep reading. This design requires significant content supply, fueling increased use of native.

Signs of possible cooling – Some signals hint that the robust growth of native ads in 2015 may flatten this year. Fewer marketers plan to use native ads on mobile platforms, according to a survey of 300 marketers released in January by Trusted Media Brands Inc. While 50 per cent of marketers used native ads last year, just 45 per cent plan to this year. The main blockers according to respondents are the current difficulties measuring and producing native ads.

Native advertising will continue to expand and evolve. These changes will alter the appearance, performance and adoption of native ads, better serving publishers, advertisers and consumers.

US publishers may need to change their native ads