Socrates once said, “The unexamined life is not worth living.”  When I look at the rampant proliferation of propaganda, misinformation, libel, sensationalism and fake news (lies, hoaxes, or “alternative facts”, any way you want to call it) in mass media today, I can’t help but think that if Socrates were alive today, he’d add, “…and unexamined news is not worth reading.”

It’s easy to sit back and point the finger at mainstream media as the culprits of the compost we’re seeing online, but that’s not only unwarranted, it’s irresponsible.

A recent study funded by The Coral Project – a collaboration between The New York Times, The Washington Post, and Mozilla – verified what we’ve intuitively known for a long time.  People today want to be part of the conversation with journalists and editors.

I have always believed that to be true despite some publishers muzzling their readers by blocking comments, but I also believe that privilege comes with a price.  If you want to be involved, you better start taking responsibility for your role in fact-checking what you’re reading, commenting on and sharing.

Now I know what you’re going to say… If it’s all of our jobs to “examine” the news, how can we do that with the sheer volume of content that bombards us every day – most of it crap?  How can we possibly be expected to take the time to verify “the facts” with our continually decreasing attention spans? 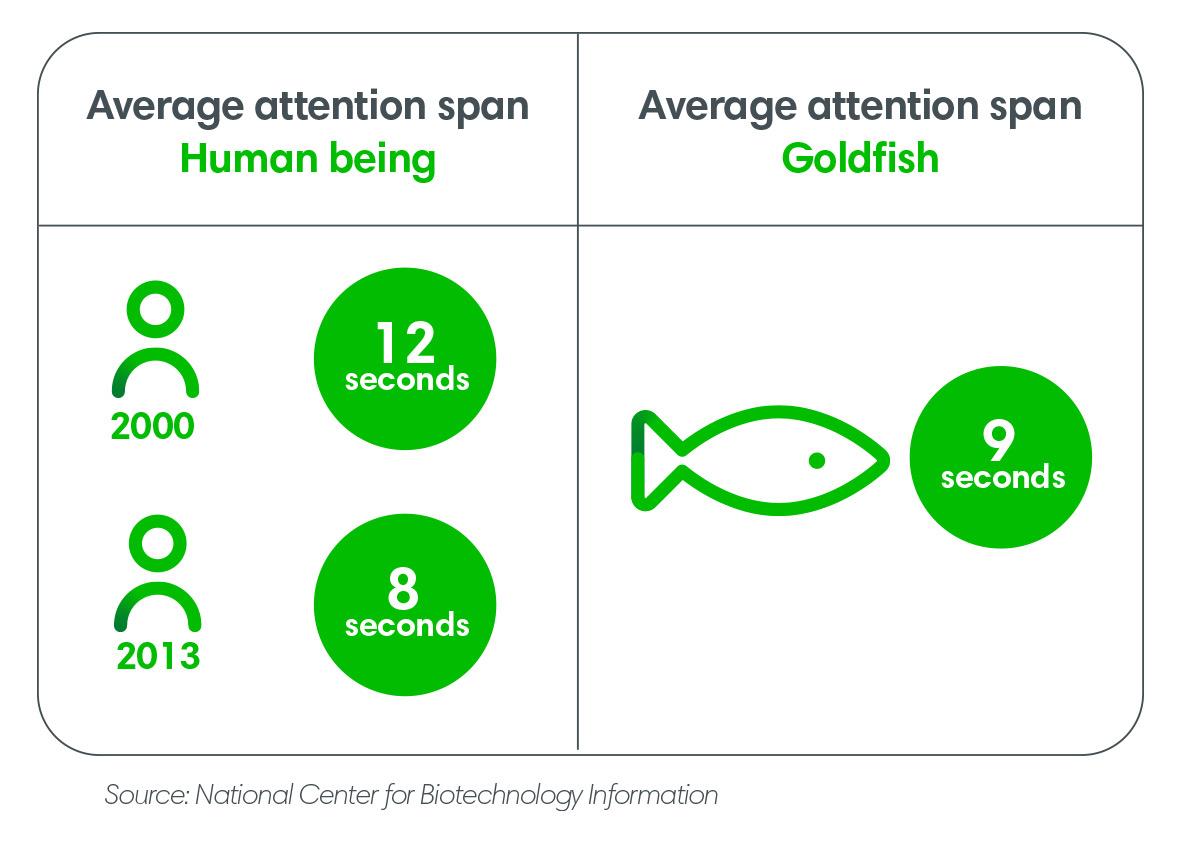 Here are a few suggestions…

1.     Think twice before sharing content vetted by followers and friends who have not provided any indication that they verified it prior to hitting Send/Like.

I realise that it is human nature to see content that comes from friends and family with the assumption that it’s valid and appropriate to pass along.  After all, you don’t want to be perceived as someone who’s not on top of the hottest breaking news.  But just like you, your friends and family are human too and can be caught up in the virality that fake “newsers” exploit with catchy or jaw-dropping headlines.

By not examining every story before you share it, you are letting your ego trump your intellect and reputation. And you know what they say about egos… “Pride goeth before the fall” – Proverbs 16:18

There’s an old Russian proverb that warns, “A word is not a sparrow. If it flies out, there is no way to catch it.”

So think twice before falling into the trap of sharing what your friends and followers have posted. If something smells fishy, it probably won’t take long before it really starts to stink.  And if you’ve engaged with it and shared it and added to the frenzy, you won’t be able to wash your hands of it later.

I know it seems harmless today, but the breadcrumbs left on the digital highway by your impulsiveness can and do lead to something I witness every day at work – urgent requests for legal expunges.

“It takes many good deeds to build a good reputation, and only one bad one to lose it.”

A May 2016 Pew Research Centre study reported that 62% of Americans get news on social media (44% specifically from Facebook).  But according to Mark Zuckerberg, “Of all the content on Facebook, more than 99% of what people see is authentic. Only a very small amount is fake news and hoaxes.”

But consider this before thinking that ~1% is just a drop in the bucket.  Every day, there are ~40 million tweets on Twitter, plus 4+ billion messages and ~6 billion “Likes” posted on Facebook. I am sure you will agree that ~100M fake news posts/likes on Facebook alone is still far too many to ignore, especially when we see how social media has assimilated itself into our lives, relationships, work, communities and the democratic process itself.

The power of social media is a wonderful thing to behold IF Social Media (it’s media, after all) = a free press by the people for the people.   But it can also be terrifying because it gives the unscrupulous the power to corrupt, control and actually alter the course of history through the spread of hoaxes, lies and disinformation.

One of the things that struck me as anything but normal last year was the treatment of fake news by the general public. Instead of recognising it for what it was – total garbage – people treated it like it was legitimate and worth sharing. 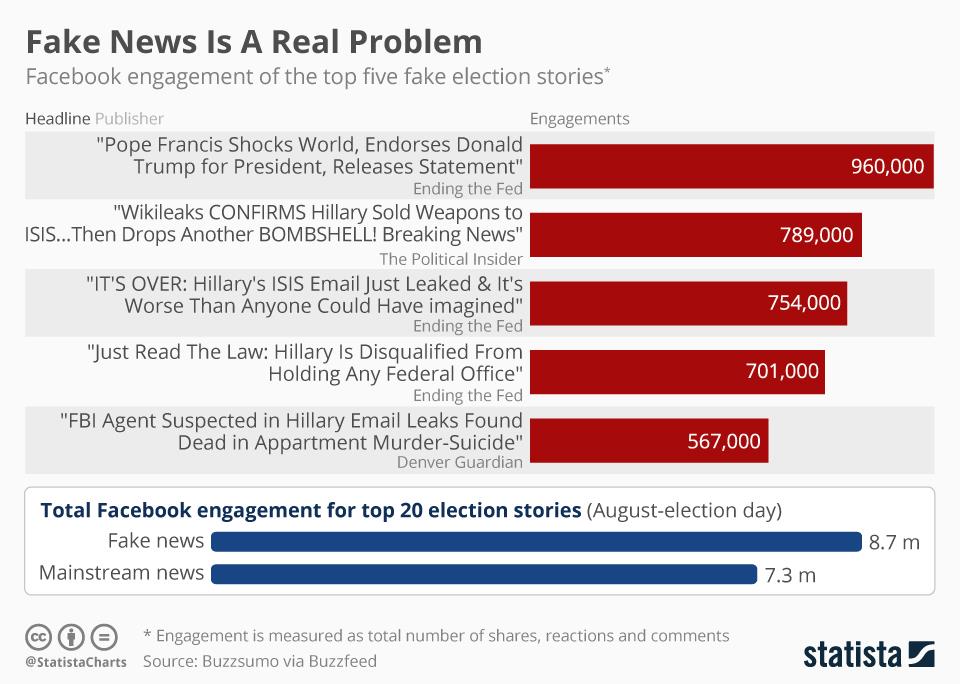 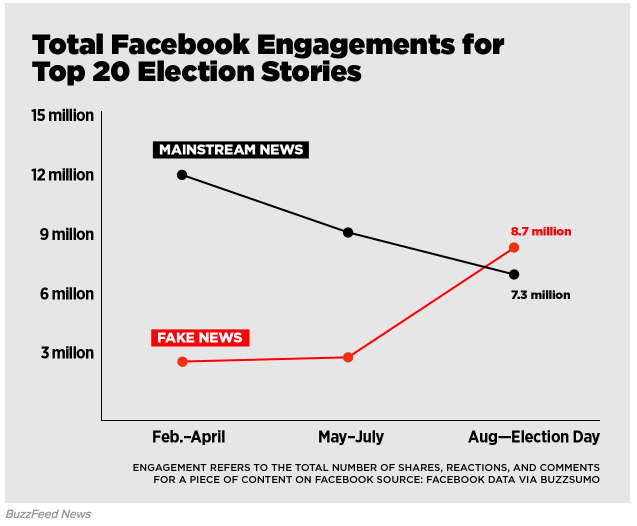 When I saw the stats, I assumed (or, in quest for an acceptable explanation, hoped) that people weren’t able to differentiate true journalism from fabrications.  But if Pew’s December 2016 survey of 1,000+ US adults is correct, it would appear that most people knew full well that they were propagating fake news on Facebook. 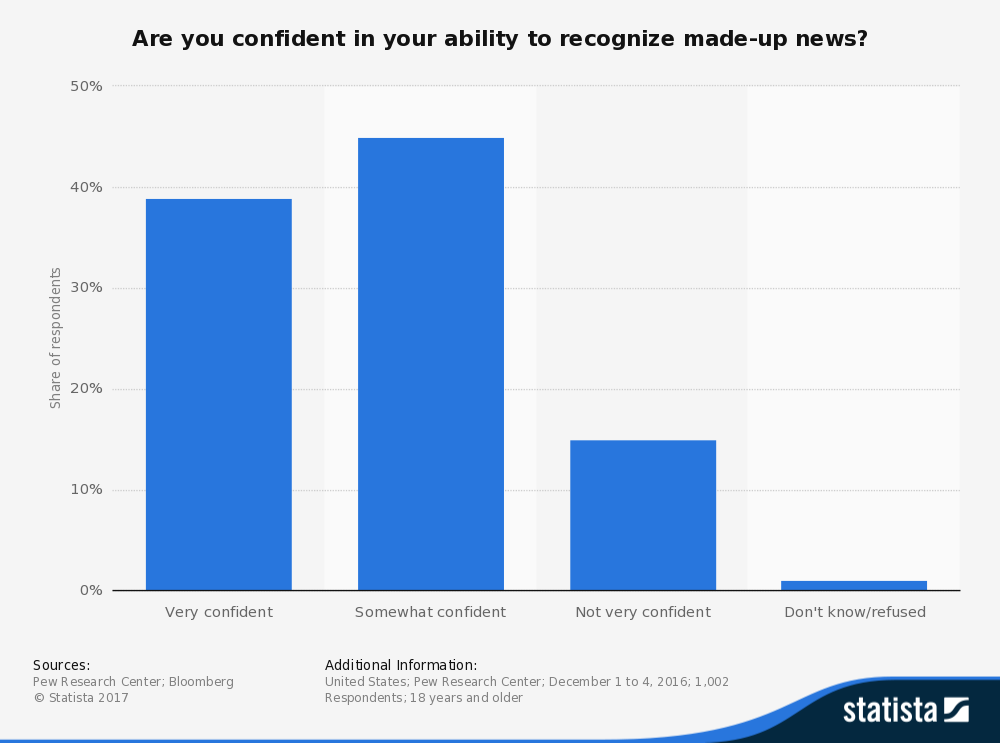 That begs the question, “Do people understand the implications of their actions?  Or has fake news become so common – so “normal” – that it has lost its ability to appal us?”

Content designed to manipulate and mislead is not normal and, despite all of the recent developments, should never be normalised. Instead it must be called out by everyone who believes in the truth.  Quite the contrary, it must be shunned and shut down so it cannot infiltrate the media and continue its erosive attack on the fourth estate and all it stands for.

3.     Choose news sources that have earned a reputation for quality journalism.

Time is a precious commodity and with our diminishing attention spans, it’s now more important than ever to separate the wheat from the chaff by focusing what little attention span we have on quality content, true journalism.

Unfortunately, most surveys on trust in media present a disheartening picture.  In a Gallup poll late in 2016, mistrust in media reached an all-time low, making one wonder if quality journalism is dead. 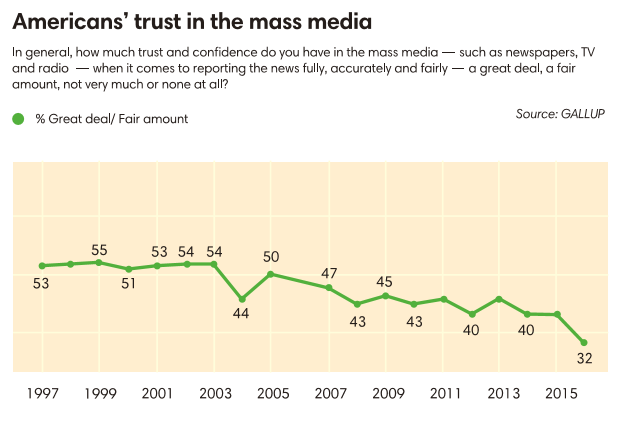 No, it is not!  Mistrust in “mass media” is high, of that this is no argument, but don’t jump to any hasty conclusions about the state of journalism.  If this study by YouGov in December 2016 tells us anything, it’s that not all media is created equal.

Newspapers and magazines that have been around for generations have worked hard at gaining the trust and loyalty of their audiences.  Even with some hiccups along the way, the same YouGov study (notably, post-US Presidential election) showed that the absolutely majority of Americans still trust in the newspapers.

An August 2016 Mequoda study also reported that more than 2/3 of US adults actively read print magazines, magazine audiences grew by ~7% and digital magazine spending in 2015 increased by 52.7%.

Loyalty in magazines remains high because of the quality of both editorial and advertising content (perhaps due to the “Vogue Effect”).

So it’s no surprise that most publishers believe that the distribution of less-than-accurate news will actually strengthen their position online. 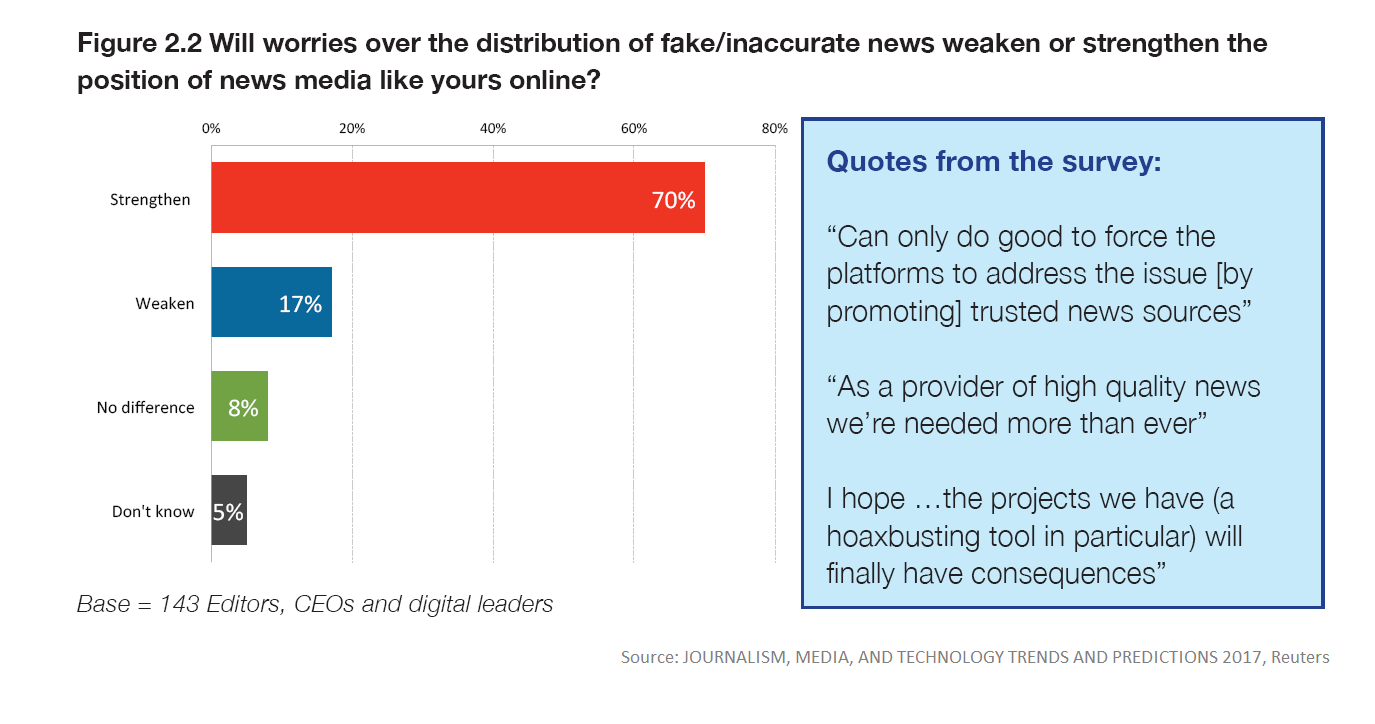 Quality content is still attracting quality audiences – something we at PressReader have never doubted in the 18 years we’ve spent in the publishing sector.

What started out as a digital newspaper and magazine kiosk in 2003 which grew to over 6,000 publications, the service evolved into a media-rich social platform that addresses the unique needs of multiple audiences.  Today, PressReader offers both a digitally-enhanced replica view for traditional news lovers and a more fluid, streaming view of articles for digital natives, aggregating content from all of the sources in a more personalised, more targeted, more relevant, more engaging way.

But we knew that presentation and content weren’t going to drive revenues for publishers given that the majority of people are not willing to pay for news online, particularly in English-speaking countries.

So in order to grow both reach and revenues for our publishing partners, we developed a consumer-focused content distribution network in the hospitality, transportation, telecom and library sectors – businesses that pay for access to the most respected publications in the world on behalf their ~300M customers and patrons.

But, with PressReader’s vast quantity of quality content, it was also important for us to ensure a seamless and frictionless discovery mechanism for the highest engagement levels for individual readers – a major undertaking!

Using behavioural analytics generated in real-time by PressReader’s proprietary Reading Map technology PressReader continually modifies its newsfeed based on the ability of individual articles to retain the attention of other readers.  In this sense, our audience acts as a global editorial board that decides what quality is and what it is not – promoting high-value content, precluding fake news from rising to the top and encouraging engaged conversations around content. 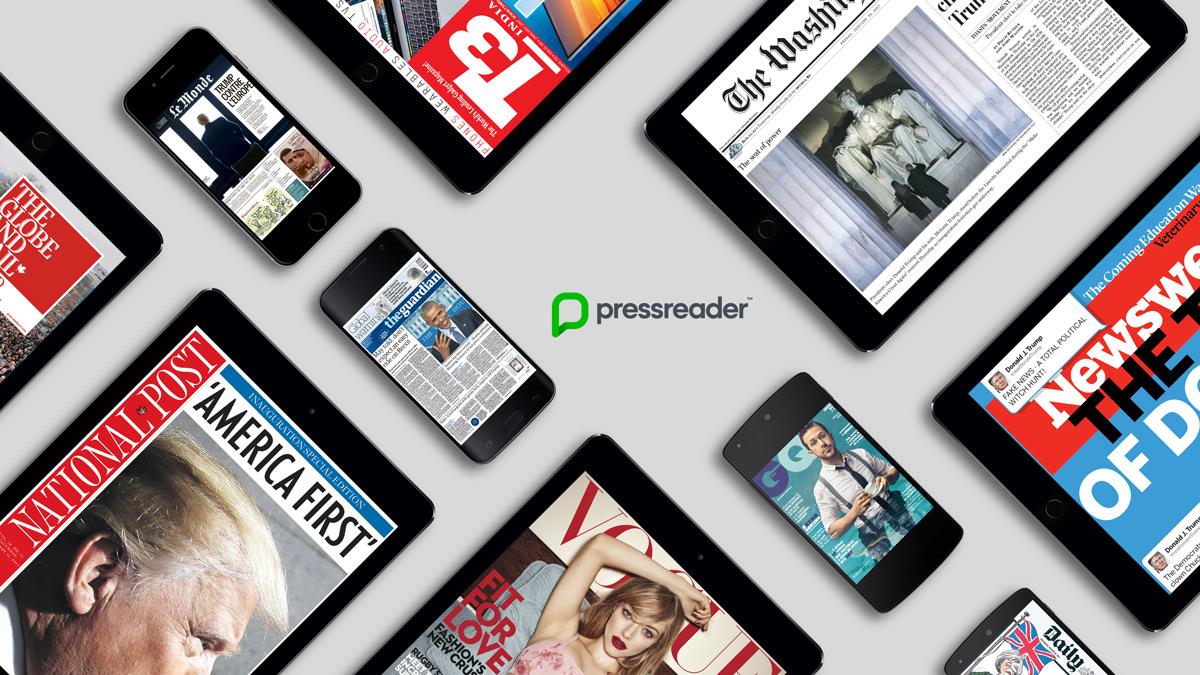 As a result of this algorithm and the quality of our audience, we have largely avoided the issues of trolling and abuse on the platform. Sure, we have some, but proportionally it is a very small number.

Truth and trust are two-way streets

2016 was a tumultuous year for many people, the not the least of which were those in mainstream media.  Tarnished with a broad-stroked brush that punished the many for the sins of a few, legacy media (or “mainstream media,” as it is referred to by some) journalists faced continual harassment from those who’ve never walked a mile in their shoes. It’s little wonder why some (definitely not all) made the mistake of trying to be first over being factual in their panic to garner page views and shares.  It was costly in terms of their reputation and the trust readers had in the fourth estate.

But 2017 is another chance to start again and we’re already seeing changes, starting with The New York Times’ 2020 strategy which shifts focus away from quantity and page views to quality, relevance and deeper engagement with reader.  The journalist community is also stepping up to the plate with a renewed commitment to regain the trust of the people – starting with an open letter to Donald Trump from the US press corps.

“We will set higher standards for ourselves than ever before. We credit you with highlighting serious and widespread distrust in the media across the political spectrum. Your campaign tapped into that, and it was a bracing wake-up call for us. We have to regain that trust. And we’ll do it through accurate, fearless reporting, by acknowledging our errors and abiding by the most stringent ethical standards we set for ourselves.”

Now it’s our turn.  We all have a responsibility to be advocates for the whole truth and suppressors of lies, hoaxes, “alternative facts” misinformation and propaganda.  In 2017, let’s make a commitment to seek out and support quality journalism and shun that which is not.  And, let’s help those who struggle to differentiate facts from fiction, because as Brendan Nyhan, a professor at Dartmouth College said, “Standing up for facts is a kind of patriotic act, and a necessary one.