One of the figures responsible the for growth of the the company is Jay Lauf, publisher of Quartz and SVP of Atlantic Media. In his role, he oversees Quartz’s business operations and acts as a senior advisor to Atlantic Media on corporate initiatives. 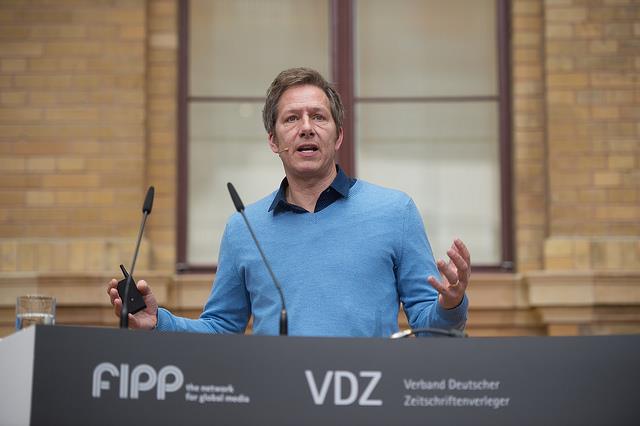 At DIS he began his talk by outlining why the focus for publishers shouldn’t be about technology, but actually the human element of the business.

Jay then ran through some of the changes of the last 15 years. In particular citing how more and more time is now spent on mobile devices than on desktop. He said that 70 per cent of Quartz’s audience is on mobile devices and this presents both a “huge opportunity and a set of hazards.”

“Mobile is much more intimate,” explained Jay, “people aren’t multi-tasking, they are focusing on the content and that means it is easier for publishers to repel them.”

Related: How The New York Times brings the audience inside

And one way readers respond is via ad blockers. Jay pointed out that as many as 29% of mobile owners in the US and Germany are using ad blockers.

He countered this by saying though that “consumers don’t necessarily hate ads, they hate bad advertising experiences. We spend so much time to draw people into the site and then put up a wall to prevent them from getting the content,” explains Jay. “Ultimately it is about treating others in the way that we like to be treated.”

Jay then went on to outline how Quartz is handling the problem. He said that year on year they have doubled revenue and this was for a number of reasons.

He stressed the importance of highly visual content – charts, he explains they are “cat videos for professionals.”

Jay then spoke about the centrality of trust saying that there are two ways of building it. Firstly by providing high quality content and secondly by relentlessly focusing on the user experience. “Stay out of the user’s way – ensure that everything renders well on mobile first,” exhorted Jay.

Jay listed a series of things that you won’t find on Quartz products from video pre-rolls to Outbrain content ads. He also said that industry had to look again at banner ads – saying that you are more likely to be struck by lightning than intentionally click on a banner ad.

As Jay explained Quartz takes a different approach. “We had a blank canvas from day one, and tried to create own ad scarcity and therefore deliver better, more relevant advertising that adds to the experience.”

Jay also referenced the Quartz app – which he described as being like “a smart friend texting you back the news.” He describes it as being highly addictive yet delivering advertising only in an unobtrusive way.

Another significant product for Quartz is its Daily Briefing email newsletter. “We asked what do we want from an email newsletter? said Jay. “We didn’t want to produce a marketing vehicle that drives you back to the site, we wanted the email to be a product of its own – a standalone tells you what happened while you were sleeping. The newsletter has 350,000 subscribers and 40 per cent open rate.”

Finally Jay asked “is this working as business proposition? Four and a half years in and we charge significantly higher CPMs than the industry average. Click through rates are 4x that of industry average. More than 200 advertisers have tried Quartz and 95 per cent do repeat business.

“Experience is everything,” concluded Jay.

We are at Digital Innovators’ Summit 2017! Here’s how you can follow it

How news media brands are innovating in content creation and delivery