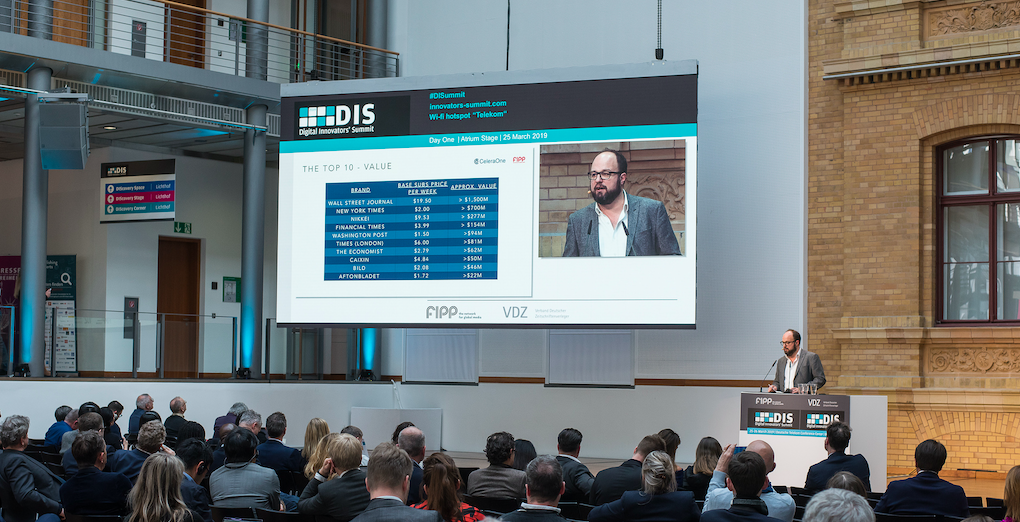 The second Global Digital Subscriptions Snapshot report compiled by FIPP and CeleraOne has been released at this year’s Digital Innovators’ Summit.

Sharing some of the report’s key findings, James Hewes, president and CEO of FIPP, said the data for this groundbreaking report was sourced either directly from publishers or from publicly disclosed figures found in annual reports and interviews. Pricing data uses base subscription price as a baseline.

He said top of the list was no surprise as the New York Times has been a very visible pioneer in the digital subscriber space. It launched its paywall in 2011 and now, eight years later, the world has seen that they have broken through the three million barrier to a record 3.3 million subscribers at the beginning of this year. That’s up from 2.8 million last year, an increase of 18 per cent year-on-year.

He said the Wall Street Journal, with its predominantly business audience had the second highest subscriber base but earned more because of the high subscriber pricing. The Washington Post came third, followed by the first non-US title, the Financial Times, another publication with a long paywall history. The UK’s The Guardian is fifth on the list.

A new entry is Nikkei, owners of the FT, number six on the list with a large base in their home market of Japan. The rest of the top ten names are The Economist, BildPlus, Times and Aftonbladet.

US the dominant market

Hewes said publishers are interested to know what the relative strength of the digital subscriptions markets are in different countries. Based on the data it is obvious that the United States is by far the dominant market in the digital subscription space with almost seven million active subscribers. The UK has a strong position too, with two million subscribers, followed by Germany, offering the fastest growing major economy in this year’s report. There is also significant movement in South America, the rest of Europe and Asia.

Digital subscriptions add huge value to revenue streams, explained Hewes. The publication which earns the most is the Wall Street Journal, because even though they do not have as many subscribers as the New York Times, these are higher priced delivering perhaps twice as much revenue as the New York Times. Similarly Nikkei is only number six on the list in volume but number three in value. For the same reason, the Financial Times adds higher value than its volume ranking.

One brand – Caixin from China – said Hewes, isn’t even in the top ten by volume but its relatively high price point means that it’s number eight by value, with more than USD$50m of revenue.

– The digital subscriptions market is currently dominated by newspapers

– Some magazines are starting to have an impact, particularly news & current affairs titles

– Steady rather than spectacular growth for the biggest players (NYT +17 per cent y-o-y; WSJ +8 per cent; Washington Post +20 per cent)

– Considerable growth in the German market but from a smaller base

– Average pricing coming out to around $3.50 per week globally

– No apparent correlation currently between price and volume