The 2016 appointment of Gary Liu as chief executive officer of the South China Morning Post (SCMP) was a bold one. Previously the publication’s technology leader, Liu has also held positions as the chief executive of New York-based news aggregator Digg, and led Spotify Labs at the Swedish music and streaming service provider.

The statement made by Joe Tsai, chairman of the SCMP board of directors at the time of the appointment, revealed the full extent of the newspaper’s ambitions: “Our readers expect SCMP to maintain its editorial excellence while staying relevant in the face of technology disruption.”

Within just a few minutes of speaking with Liu you realise that he is not only capable of delivering both, but more to boot. The CEO’s conversation switches boundlessly between content and commercial, editorial and advertising, navigating mobile screens and navigating Government regulations as if they were all one and the same thing, which of course they are. He gets it. And as he explains here in this exclusive video interview for FIPP, it’s not simply about one single mode of transition from print to digital or local to international, but a case of updating the publication right across the board.

“We are a 114yr old news organisation/newspaper, based in Hong Kong, that is trying to transform,” says Liu. “And this transformation is not just about print to digital for us. It is going from a regional newspaper that covers the world, to a global media organisation that has regional expertise. And so going to digital is really just a means to an end. We still cover global news stories for the residents and citizens of Hong Kong where we are the newspaper of record. But more importantly we are covering China for the rest of the world to understand this rising superpower even more.”

“So what we have is two very different products for people based on what their China expertise and understanding is. For those who really understand China and want to go deep our flagship digital product, South China Morning Post and scmp.com is where we have 900 articles per week, most of which are about China and China’s relationship to the rest of the world. But for those who are just getting started, just trying to understand China for the first time, then we have a new product called Inkstone, which provides the six articles that are both current events as well as longer-form content that elevates your understanding of what’s going on in this massive country.”

SCMP’s dichotomy between local reporting and international audiences is fascinating, because it appears to have provided the blueprint for the way in which the product’s logistical operation has evolved in recent years. While some audiences will require deep-dive articles, others might prefer to skim their way through, and this user-centric ideology is penetrating the very fabric of the content’s ergonomic presentation.

“What we’re realising is that North-South as a navigation, and East-West as a navigation are both at this point relatively native. These are learned behaviours that everyone knows, everyone understands, but generally speaking digital products and editorial products conflate the two. So we wanted people to understand North-South swiping as going deeper into a story or into a topic. While left-right swipe as it is in a lot of other discovery products, it really is about discovery. We’re still in the early stages of it, we could be completely wrong! Our AI is definitely not intelligent enough – hopefully a lot of usage and a lot of data will help us improve both.”

A lot of transitionary talk in the industry of late has been about the move away from social media and back towards the branded website. So where does Gary see SCMP’s content predominantly sitting?

“We are very much committed to distributing media. Not necessarily so much the way it was executed on over the course of the last few years with the power and consolidation of networks. But we do believe that we should be wherever our users and readers are. And so you will find us with owner and operator properties. You will find us focussing in on trying to figure out SEO like everyone else, or experimenting on all sorts of different social platforms. And you will absolutely find us investing in the newsletter product, because we do believe that is a fundamental one-to-one relationship with our readers.”

As distribution models have changed in more recent years so too have advertiser needs. The South China Morning Post is committed to providing new models and new options for brands, and is championing the need for greater cooperation within the industry.

“Yes advertisers are definitely changing their asks. However, I’m not sure either of us on either side of the equation, advertisers and agencies on one side, and publishers on the other, actually know how all of this is going to shake out. We’re all experimenting. Advertisers know their money has to shift from traditional digital channels. Publishers know that we have to create new variations of the ad-products that exist today. Frankly speaking, I still think it’s years before all of this is going to shake-out.”

“Where all of this is going to net out, I’m not sure. But here’s what I do think: we need to talk more to one another. We need to cooperate more. Because if we as news organisations are still trying to do this on our own one news organisation at a time, then networks that have now taken over all of the revenue growth – 98 per cent of all new digital advertising revenue growth in the last few years has been for Google and Facebook – are going to continue to pick us off one by one. We have to talk more to one another.”

And when asked about the industry’s ability to take on the Facebook-Google duopoly, Liu emphasises how improvements in user-experience can help to rebalance this battle.

“I think we have to. Whether or not I’m optimistic I’m not sure is necessarily relevant, but we absolutely have to. And by the way the negative PR that surrounds Facebook and to some extent Google right now, that does not matter to the consumer. The consumers have made their choice of using Google and Facebook. Because Google and Facebook have better user experience than us as news organisations. They do a better job of helping consumers find content that they fell is relevant and they like. For news organisations to beat them, it’s not just about getting together, we also have to fix our own user experience so that consumers will start choosing us.” 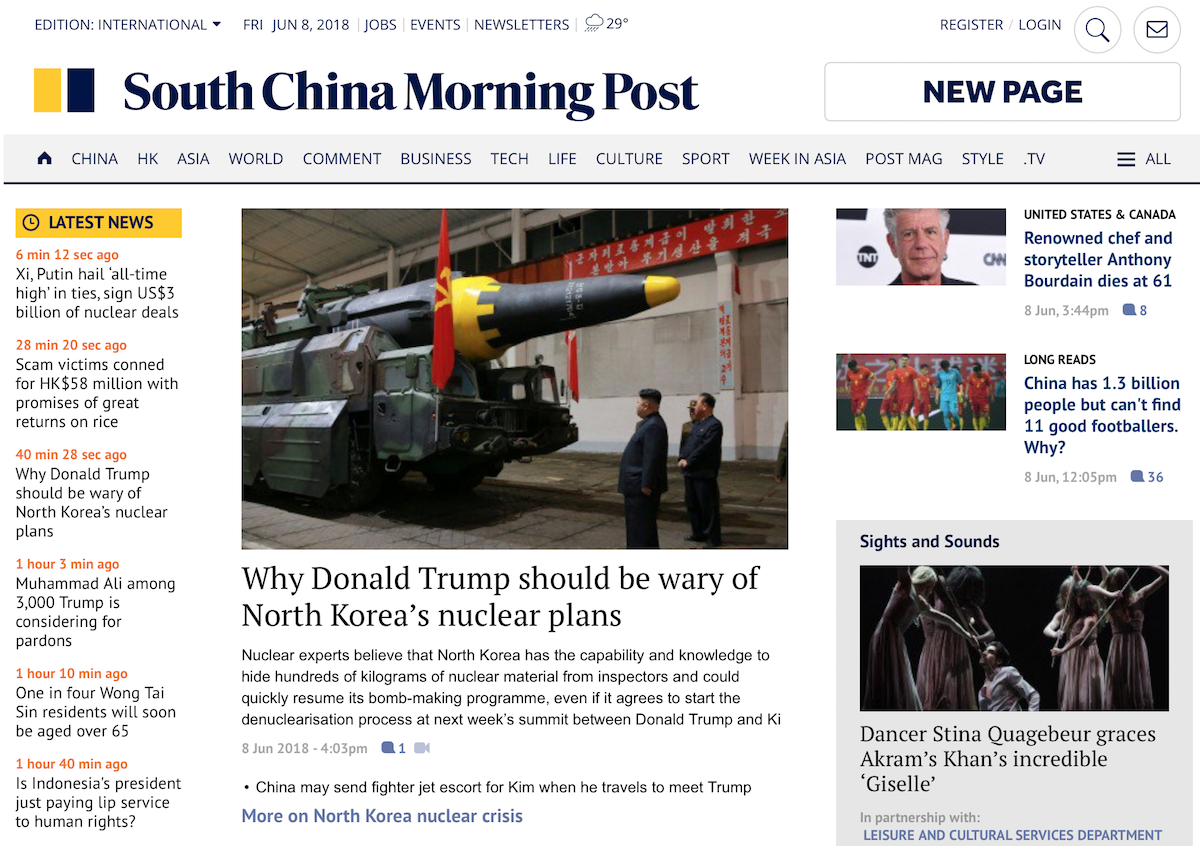 Finally, we asked the SCMP CEO about the difficulties of operating within China, a state that has become synonymous with media censorship particularly with the advent of the internet and the blocking of Facebook. While the autonomous territory of Hong Kong can provide something of a haven from state-run control for outlets operating within the region, Liu emphasises that in mainland China press freedom remains a huge problem.

“Well there’s two different things that you’re asking here: one is the operation of our news organisation, which is based in Hong Kong. And thankfully Hong Kong, because there’s an independent judiciary and a separate form of governance, freedom of press is protected. And so we’re able to operate with full transparency and full freedom in Hong Kong.”

“However when we report on China, inside of mainland China with reporters, foreign correspondents and also staff within mainland China, we have to operate within China’s laws. There is no freedom of press there. There is no freedom of information there. And so we have to learn, and we always have had to do this, how to be able to report and try and find the objective truth through all of that.”

“As what is considered a foreign/international news organisation within China, that’s how we are considered, just like the New York Times, and Bloomberg, and the Wall Street Journal, and the Financial Times, we are learning how to operate with every change in administration, with all the changes in the laws that are constantly being thrown at us. So it is a difficult thing, but we’ve had 114 years of experience and so I think we’ll be able to find a way.”

The thing that separates the South China Morning Post, and its forward-thinking CEO, from many other outlets within the industry today, is its holistic approach to change. Transition is not simply compartmentalised as a technological issue, or an editorial one, or indeed viewed through the modern prism of the Facebook-Google duopoly that has skewered many a view in recent years. Change is occurring at every level, from the socio-political right down to the intricate details of how we swipe our phones when looking for different types of information. It is this rounded view that should stand the publication in good stead for the next wave of change.

Join worldwide media leaders and colleagues at the FIPP Asia conference, taking place on 14 and 15 September in Wuhan, China. Take a look at the first confirmed speakers here. Book now to save: fippasia.com

Chart of the week: How China’s social media giant compares to Facebook