“Smithsonian magazine has always been an independent magazine,” explained editor-in-chief Michael Caruso. “We do the same thing the Smithsonian does, we go out and cover stories and research of interest to our members, the same way our museums do.”

The magazine was launched for commercial purposes, to bring in revenue, as the private enterprise leg of the non-profit institution. They run the gift shops, Smithsonian Networks, a joint venture between CBS Corporation’s Showtime Networks and the Smithsonian Institution; and an official travel programme called Smithsonian Journeys, too.

“Over the course of its lifetime, Smithsonian magazine has been spectacularly successful,” Caruso said. “We’ve contributed almost a billion dollars to the larger non-profit.”

But, as the media landscape changed over the last number of years, Smithsonian magazine, which has a readership of seven million in print and 10 million online, wasn’t generating the profits to the extent they had in decades past, although it still successfully generates million-dollar profits on its own, Caruso noted.

They’ve since expanded to alternative platforms for revenue and reach. Live events have proven particularly valuable, according to Caruso, who is also the vice president of live events.

Events are great ways to tell stories, he said. “Live events is something we’ve moved into very heavily,” he said. “And what’s great about it, is we’ve been able to use the resources and the authority of the Smithsonian and Smithsonian magazine to enter this new realm.”

Three of their major events are the American Ingenuity Awards, Future Con and Museum Day. 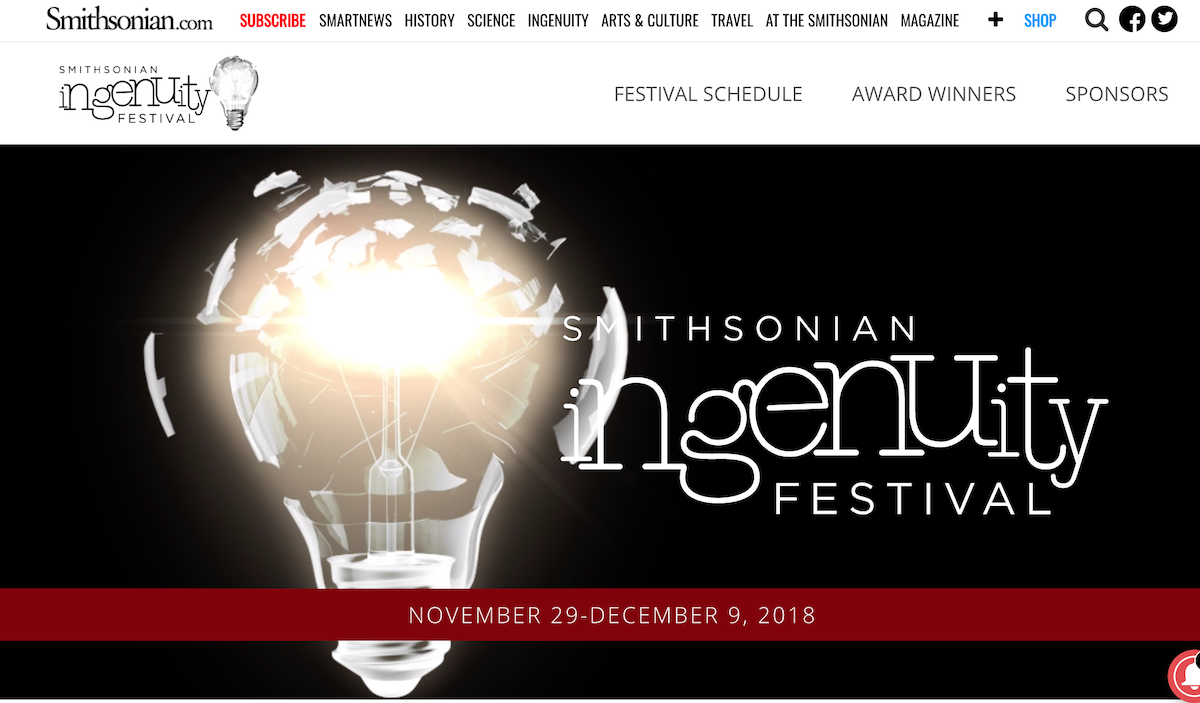 The second event Smithsonian magazine launched at the same time is called Future Con, formerly The Future Is Here, a science-meets-science fiction conference for students and young people interested in the sciences. The festival is part of Awesome Con, DC’s largest pop culture event. The event runs over three days and includes exhibits, panels and main-stage events designed to create awareness, advocacy, and interest in all things futuristic, tech-centric and smart, in April each year.  “We get about 70,000 people to the Washington Convention Centre and we bring everyone from Patrick Stewart and William Shatner, to people from DARPA and NASA and IBM,” Caruso explained. “It’s a great cross-section of science and science fiction, and what we celebrate is a lot of great cross pollination.”

The third event Smithsonian magazine takes great pride in presenting each year in September is Museum Day, which includes free admission to museums and cultural institutions in all 50 states. “We’ve organised a free day at museums across the country,” Caruso said. “This year, we’ve had 1500+ museums participate. Our sponsor was Microsoft. Our anchor event was at Intrepid Sea, Air & Space Museum in New York City.”

It’s about the brand meeting their audience where they are, whether they’re online or coming to museums across the country, whether they’re reading the magazine, or doing all of those things, Caruso explained.

“Though we’re a national museum network and the magazine goes all over the country, we are physically mostly in Washington DC, these platforms help us reach outside of our city,” he said. “People have so many more digital and virtual experiences these days, I think they’re craving that live experience more and more.”

This @MuseumDay is celebrating #WomenMakingHistory! Explore stories of the trailblazing women in aviation and space, and share what you discover. ✈️ 🚀

With each of these events, Smithsonian magazine is able to take that offer to sponsors who are interested in a broader audience and sell across all of their festivals, and are able to combine all of those live events and sell across all of their platforms including the print magazine, online, their award-winning podcast Sidedoor, and affiliate network with museums across the country.

Into the future, Caruso said Smithsonian magazine plans on expanding upon its major events, and are looking “seriously into virtual reality, that’s something we’ll be getting into quickly.”

For publishers looking to emulate Smithsonian magazine’s success in live events, Caruso suggests to be creative, be nimble, be aggressive, and borrow from success stories. “You’ve got to steal and adapt from people who are doing things well,” he said.

As an example, the editor attended the Aspen Ideas Festival last year, which he enjoyed, “but, I looked around and said to myself, ‘we could just do this,’” Caruso said. “I’ve got all of these smart people coming into town, why not build an ideas festival around that? After I came back from Aspen, everyone said this is crazy, you can’t possibly put together an ideas festival in two months. And, we did. We borrowed an idea that works really well and found our own way to do it.”