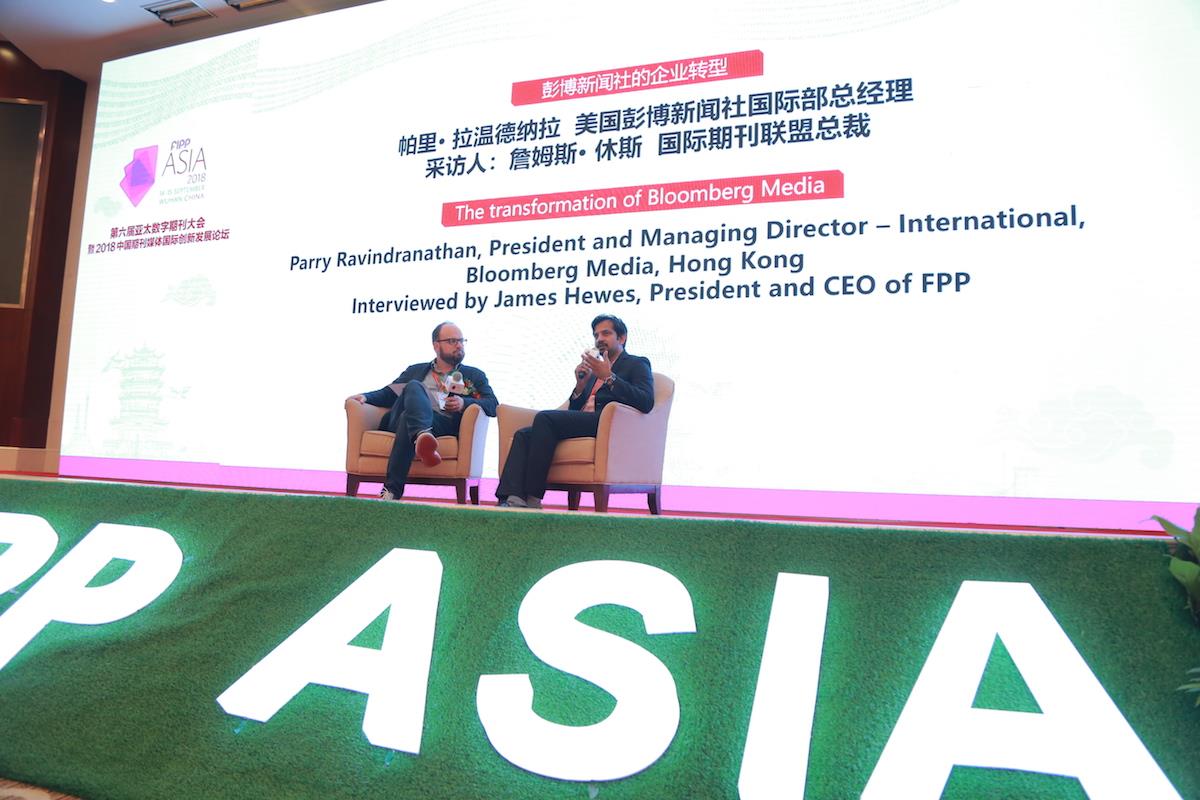 Bloomberg Media remains a relatively unique industry player, in the sense that it is a very large media company sitting inside an even larger financial and technology brand. Owned by the largest shareholder and the man behind the name, Michael Bloomberg, the media division began as an extension of the core business before being transformed into what its international MD today calls ‘a proper media company’.

At the recent FIPP Asia event in Wuhan, China, FIPP CEO James Hewes sat down with Ravindranathan for a revealing on-stage interview, and began by asking him about the company’s shift to digital.

“Up until as little as eight years ago, Bloomberg was still counting digital as a very small part of its revenue base,” said Parry Ravindranathan, managing director international, Bloomberg Media Group. “At that time, television was still providing us with the biggest revenue stream. However, around four years ago digital crossed television as the company’s main revenue driver and since then it’s been quite a transformation for us.”

“Profit margin played a big part. TV is a costly business. So in the shift from television to digital, profit was of course a huge driver for us. These changes took time, but I think that in the longrun this was fruitful for us. Bloomberg was in many ways a comparatively late adopter of digital, compared to peers such as the Wall Street Journal for example. But I look at where we are now and we’re actually more multi-platform and larger on digital than some of our main competitors are.”

While the brand does involve itself in acquisitions, most notably the high-profile 2009 purchase of Businessweek, Ravindranathan highlights that building from the ground up can still be the most attractive – and effective – means of creating new revenue streams.

“I think there are markets where we know we need more depth, and in India for example we have done partnerships. But in general our tendency if we can is to build things ourselves, and you can see that with our television business, our digital businesses, and radio. I think Bloomberg is quite lucky in the sense that if you really boil us down to our basics we are a technology company. So we have more researchers working on our products than pretty much anyone else I can think of. We try to stay ahead of the innovation cycle, being one of the first for example to build a dedicated platform for Apple TV.”

“One of our most exciting new ventures is a joint project we have launched with Twitter, called TicToc, which began based on the initial idea of attacking misinformation. This provides a global news network for a social, mobile world. The idea is really to be able to use our reputation of credibility on top of Twitter’s speed, and kind of make it more accountable in some ways. TicToc was a big step forward for us because it was about creating something for the social media sphere, and thinking about things in a different way to television. So I think this was the first step into new forms of revenue diversification and it’s actually a highly profitable step.”

“We’re also doing a lot of experimentation with voice, a lot of experimentation with AI, and as you know business news is slightly better at AR than VR, so we do experiment with a lot of technology across the board. Staying ahead in technology is what’s going to really matter in the next few years. Even the way we think of advertising as ad experiences has changed quite dramatically for all of us and everything has really made us look at pretty much the whole business model afresh if you will.” 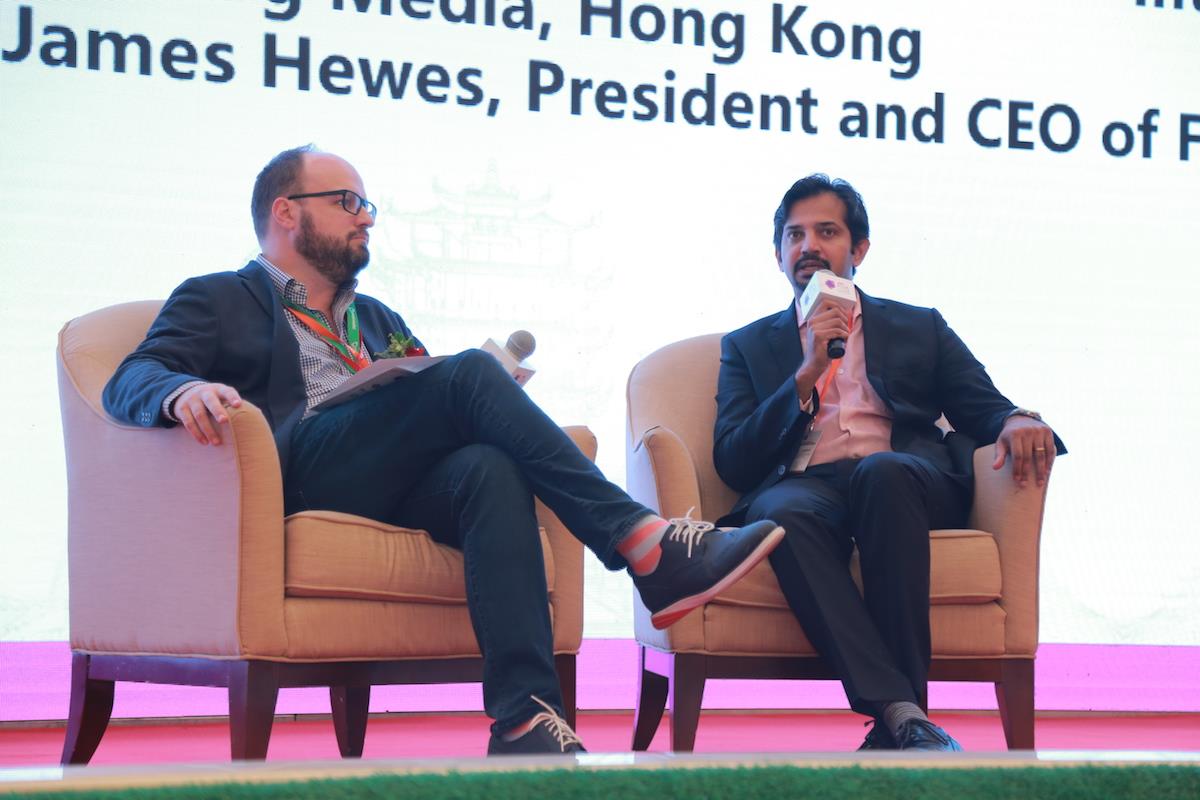 Then Hewes asked Ravindranathan about Bloomberg’s experimentation with paywalls, since this has been a growing trend in the industry over the past twelve months.

“We went behind a paywall about four to five months back and I’d say at this point it is no longer an experiment, but rather the reality we are going to be in. We actually put Businessweek behind the paywall first. It was really a learning for us to try and see if that kind of premium content is something that people have an appetite for, and I think that was a great experiment that led us to put Bloomberg.com behind a paywall. It’s more than exceeded our expectations and I’d say has generated three times what we forecast.”

“I think subscription is the way forward, although in today’s marketplace there is undoubtedly a danger of subscription fatigue. You know, you could very easily spend US$100 a month without even thinking about it because you’re kind of swiping it on your card. And so I think as this type of model becomes more mainstream your content has to be unique enough to standout and then make those subscribers stick.”

The international nature of Bloomberg’s business has been a key driving force behind its transformation in recent years. Because of its global footprint and global audiences, the brand is able to draw upon a truly international set of experiences, and apply them across its portfolio.

“I think a good part of our expansion is global. What we are doing now is building up in different parts of the world and in some markets actually experimenting slightly differently from what we are doing in others.”

“I think Africa is a good example. We are right now looking at doing some different things because we know that this is a very important market in which we can expand. In India we recently trialled something with WhatsApp, which we had never tried before, and it’s now driving almost a third of our traffic there. So yeah we’re kind of looking at each of these markets and saying what can we do there technologically, from a business model point of view, and to keep on growing.”

“There are some markets like in Japan where we have our own digital properties and that’s a highly lucrative market. There are some where we have partnered with others to grow those businesses, like India, Canada, Mexico and we just announced a new partnership in the Middle East. And of course some of the wider Bloomberg businesses like Terminal have a very global footprint, with larger revenues now coming from outside the US from within. Going forward, we would look to China as the largest untapped market for us.”

Finally, given that the culture of media companies is such a big theme within the industry at present, and Bloomberg has been a force of transition across many different iterations over the past decade, Hewes asked Ravindranathan how the culture at Bloomberg was changing and how the company was adapting to incorporate new skills and new processes.

“I would say a significant proportion of staff has changed in the last few years. Reskilling and rehiring have been two big internal themes for us, although we are a bit lucky in the sense that the Bloomberg Terminal business is fairly digital. Many of us, including myself, came from outside because we came from varied media fields to create a larger media business. My boss Justin Smith, he joined from The Atlantic where he founded Quartz and for him to come in and build this and turn it to a pure digital business meant having a lot of people who could actually turn that around. So I would say it’s a combination of reskilling and re-hiring, but it has definitely been slightly easier for Bloomberg because of the existing place that we are coming from.”

“I mean even TV. I come from the TV world and in the digital world the way we think about TV has seen a huge transformation. We don’t really care where it sits anymore and I think that’s a big change in thinking. If you don’t think about disrupting your own business first, and hoping you’re trying to hold onto your legacy business, I just don’t think you can grow.”