In advance of his keynote at the recent FIPP World Media Congress from 12-14 November 2019 in Las Vegas, Brûlé talked to FIPP about print, Brexit… and what’s next for the iconic brand.

You’ve diversified the Monocle brand in a number of ways, including through digital products and even a retail offering. How did you identify those opportunities for expansion and how have you been so successful in that?

It’s been down to a combination of things. One is independence – the innovative freedom and the barriers that come with not being part of a big group have been the biggest drivers in how we move. We didn’t feel that there was a pressure to do ‘digital everything’ like other players did, and for many of them that caused a stumble. We were able to take our time and carefully enter that space. At the same time, we don’t have a bottomless pit of cash either, which is the barrier element. We’ve seen a lot of other publishers deploy a lot of money in areas – such as digital, such as events – without a really proper plan in place. So that’s a barrier – created by our independence – that stopped us rushing in blind or without a proper plan. Our pockets are pretty shallow, so we have to be really sure that where we go is the right way. But, coming back to innovative freedom, when we do decide, we can really take the path we want.

Another thing that’s good for us as a publisher of our scale – we’re not the biggest – is that we don’t have to be the first over the line with everything. We’re actually in a position to sit back a little bit and look at what Der Spiegel is doing, look at what the FT is doing – and maybe let them be the first-movers, so we can see how it goes before also committing. I always say in business meetings that we need to ask ourselves if people are dying for something on a specific date, because if they aren’t, let’s take some time and make sure we do it right. So there’s some healthy conservatism and some reality checks that we take, which have allowed us to make some healthy decisions about the directions we’ve moved in.

Has the magazine’s revenue model changed as the market has evolved and as you’ve diversified?

If you cut to the core of what we do and you look at the numbers, the magazine is still driven by advertising and largely driven by print. After plugging away at the podcast for eight or nine years, that’s really starting to pay this year and become a profitable business – but it’s still an advertising model. If you go into iTunes to download it, it’s there and it’s free – so it still relies on the advertising. Our business has always been underpinned by that, and thankfully we’ve seen fantastic advertising growth this year. As the path to that number altered significantly, one of the first things we did was embrace the world of advertorial and native advertising – and that has really helped us. It’s good because that type of advertising is part of our DNA. We are probably now raising 40 per cent of our advertising through native content activity and it is growing, so that’s a shift, but advertising still underpins what we do. 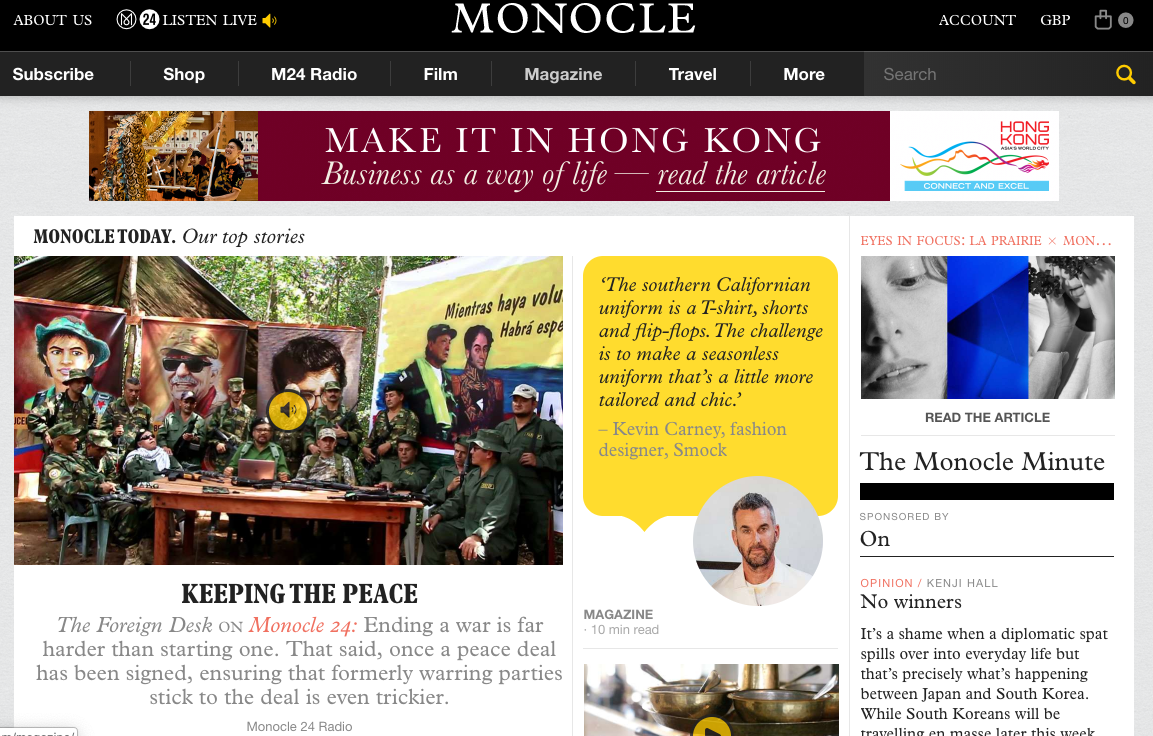 How have you managed to stick to the principles of the title and how important has that been to retaining profile of the brand as you’ve evolved?

We’ve had the same leadership on the title for some time and there’s definitely something to be said for that longevity and that consistency. We’re a title in the English language, with a truly international magazine, coming out of London. What’s helped ensure we’re seen on the same terms as coming out of Los Angeles or Geneva is having everyone pulling in the same direction. The same goes for our commercial teams – they are really clear on the types of brands that we want to be working with. And the third thing that has helped us protect the brand has been the talent we have been able to attract by being based in London. London is a magnet for fantastic editorial talent and in a good year we have something like 25 or 26 different nationalities working in our building, helping us deliver a truly international title. The total extent to which Brexit has an impact on that remains to be seen, because we have definitely seen the numbers of overseas staff dwindle since Brexit emerged. London’s position in that sense is being challenged and that’s also why we’re putting more emphasis on our set up in Zurich. We believe we need an almost parallel content hub for London, partly because of that and partly because it challenges us to ensure we protect the international element of the publication and don’t become too London-focused.

What other trends are you keeping an eye on right now that may provide a particular opportunity for Monocle?

Well, as you know we already have a well-established bricks and mortar and ecommerce business, and have had for many years. But we’re also in the midst of doing something really significant, and that’s opening a 200-square-metre books, magazines and Monocle shop at Hong Kong airport. This is partly doing something for the print sector. We have seen this steady decline of newsstand publications, with magazines and books being increasingly pushed to the back while sweets and drinks come to the front, and we’re going to completely shift that on its head and create a space that is about reading. It’s about a love of newspapers, great magazines and books, and it’s going to be delivered in an environment where you want to linger rather than think ‘I can’t wait to get out of here’. Obviously, we have a global, niche, print audience – and we know them and what they want. So we don’t need to go out and do reader surveys or poll people. We do enough with our audience to know they don’t want us to push them to digital. They will go for the things that suit them but they also want to be invited into a paper experience and that’s a big part of what has driven this. We’re creating a correction against the digital push. We’re starting that with Hong Kong, because it’s one of the most important airports in the world and, if it works, we’d certainly like to see a time when you can go into the Charles de Gaulle or LAX airports of the world and go to a place that not only pushes our brand, but also allows you to pick up other titles you enjoy.

You’ve been responsible for two of the most iconic titles of the generation. Will we see another iconic magazine brand from you?

At the moment we’re looking to turn the podcast series into a print magazine, which isn’t exactly the same, and I suspect there will be more spin-off titles to come, although they are also likely to be under our umbrella. What’s perhaps more interesting is that there’s maybe room for us to acquire something. That might be the bigger question and we’ll see where we go with that.

[FIPP Congress Q&A] The rise of the researcher