Jon Watkins spoke to him ahead of the 41st FIPP World Congress, taking place from 9-11 October where Kerin will be among 100 speakers from around the world sharing insights on a variety of industry and related topics. Join the conversation at the Congress.

Tell us about the drivers behind the launch of The Week Junior – how much of it was that you’d seen an opportunity in the market and how much was it driven by the desire to help kids engage with issues?

So, the best place to start was by looking at the success we’d had with The Week. One of the things that we’ve done, particularly over the last 10 years, was to build a suite of products that are designed to help people in their lives by providing expert opinion. Through those, there are four things that we do. We inform, we advise, we indulge, and we distil content. Our audiences are clever people who appreciate expert opinion that allows them to make up their own minds.

What The Week does very successfully is package up the news so that you can understand things by seeing multi-platform opinions rather than just one voice. And that’s why we have developed a suite of other products that adopt this approach– whether it’s our Independent Schools Guide, the financial guide Prosper, or The Week Portfolio -the Experts’ Guide to Good Living.

One thing we noticed over the years was that The Week is particularly popular with teenagers. If the magazine went into a family who had a 14-15 year old, then the teenager was more than likely reading it too. Their first serious entry point into news often came from reading a copy of The Week.

So we began to think about that we could apply this insight to a younger audience. How could we apply those principles of unpacking the world and explaining things to an audience that was even younger than teenagers?

Our immediate desk research was dispiriting. The perceived wisdom suggested that children read digital products, they had little interest in the news, and that it’s solely video content they want. But when we dug further into this audience, we found that UK children’s books sales were at a 10-year high. The highest level since the last Harry Potter. Children were reading just as much as ever in print. So we began to develop a product.

We tried to unpick reasons for the magazine’s existence and how it might relate to the customer. We came up with four things to guide us.

We had to make a product that was true to The Week’s essence but which couldn’t take The Week’s editorial approach. We couldn’t produce a dense digest of news with small pictures and sell it to a nine year old.

Next, whatever we did had to resonate with the parents too, so they would trust it enough to allow it into their house and to influence their child’s development. We also had to do something terrific for the child, because ultimately they are the readers and they had to feel that this was something made for them. And the last point was making it valuable to the educational establishment – it had to be something that teachers would wish to adopt, promote and use.

From this work, we found a core idea for The Week Junior which was ‘making sense of the world’. To explain, if you’re eight or nine, you’re beginning to become someone who reads for pleasure, and you’re beginning to self actualise in terms of your choices – maybe how your room is decorated or what you watch on TV. So The Week Junior began to become about helping children at that crucial time of transition by giving them confidence in their own opinions and ability to be look at a wide range of subjects.

You could have launched that as a digital product but you chose print. What was behind that?

Print allows you to be more of an editor and so for this younger audience we can better lead them into the most important, interesting and fascinating things in the world right now. Only print can really give an immersive experience, with great breadth and pacing. It’s very difficult to achieve that experience on a phone, or in an app or on a website. Also print is universal – not all nine year olds have iPhones. And we know that lots of our readers like to keep the copies. They’re also easier to share within the family or discuss editorial with parents. One final thing, the quality is higher because the pictures look better.

I think if you were dispassionately working out what the two platforms could achieve, you’d end up with print as the best choice. Because print’s a bit out of fashion, it seems like a slightly strange decision but actually it’s not. It’s the right choice as our success proves. 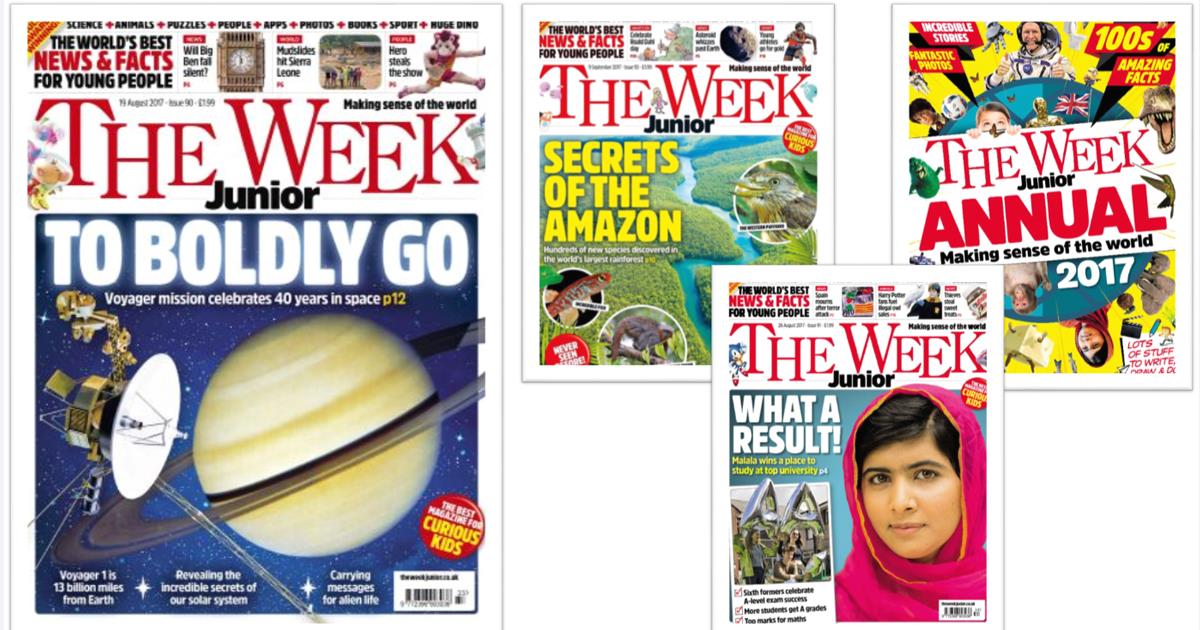 What was your launch strategy like and how has reader acquisition gone?

With The Week, we have always stuck to the maxim that the best products don’t need selling, they need demonstrating – get the magazine in people’s hands. So we went to great lengths to achieve a high level of sampling with Junior.

I think there was also some authority by having ‘The Week’ on the masthead, because that led to some quick acceptance for people who were familiar with the brand. So Junior’s logo was important, as it had to connect back to the senior brand.

One thing we really understand at Dennis is how to build subscription audiences – how to recruit people and make the model work. We have a lot of history and experience in this area. In Junior’s case, we found that it was a better product for subscription metrics than anything we’ve ever published here. Our renewal rates are already equivalent to The Week, which is a mature product. More importantly for a launch our take-through rates, which is the calculation of how many people pay up on trials, are more than double our best performing other magazine. It works brilliantly too in social media for subscription acquisition. We found a lot of success on Facebook and we even managed to use Instagram to start selling subscriptions.

Junior is really something similar to an old-fashioned print hit. Children were simply reading it and loving it. We found that when we could get it into their hands, whether they were sampling it in the queue in the National History Museum or whether we were sending it into their schools, it was working to drive sales.

And we were experimental with our marketing. For example, we did a cinema campaign using pictures of kids reading the magazine combined with iconography and images from the magazine that drove online discovery.

The upshot is that it’s the fastest-growing subscription magazine that Dennis has ever published, about twice as fast as anything we’ve seen before.

This week’s issue features news and stories from around the world including the Cassini mission, the @Great_Run, Hurricane Irma and more. pic.twitter.com/bEhxa6dLOt

And what results are you seeing now?

We have never had a single issue on The Week Junior when we have sold less than the previous week. It’s been continuous growth since launch. To give you an example, we sold a little over 5,000 gift subscriptions at Christmas alone. In terms of our audited ABC, for Jan-March 2017 we recorded 37,640. For April through to June 2017, the figure was 45,994. That’s a 22 per cent increase in a single quarter. I think we can get over 70,000 in a couple of years’ time once we get schools copies building too.

Where do you take it from here?

We are working on a couple of things in particular. I think as we get into the second phase of our development, we’ll think about how we can work into the education system. We’re working with the Department of Education on a project in Stoke, which is about opportunity enablement. It’s helping children to raise their eyes and think about the world. So I think we will begin to develop educational material in addition to what is inside the The Week Junior. We also work with the English-Speaking Union on debates in schools. And we have also begun working with Parliament, producing editorial on how political systems work. To give an example, a recent issue had a briefing on the Great Repeal Act, where we’re explaining to nine year olds what the legal effect of Brexit means for Parlianment. There are plenty of adults that don’t even know what the Act means.

From a digital perspective, we are on PopJam, which is a social networking site for the under 12’s. We’ve got 53,000 followers on that already. And I’d love to look at some international licensing for the product because I think that could work.

What can other publishers take from this and what does it tell us about the print publishing industry right now?

If you think about what’s happened with digital and print over the last 20 years, print publishers have said, ‘right, we need to go into digital and that’s where the future is’. They’ve come up with different content models and understandings, poured resources into it, and print circulations have declined alongside this process. As advertising money has shifted out, there doesn’t seem to have been as much attention to reader revenues as I think there should have been. One thing we’ve always kept our eye firmly on here is reader revenue. Our company newsstand income makes up less around 10 per cent of the total customer revenues for Dennis Publishing. We generate the vast majority of our income from subscriptions and ecommerce, because we’ve got direct customer relationships. I think publishers should continue to think long and hard about their direct customer relationships – how they can nurture them and become a direct part of peoples’ lives.

We also need to keep doing great products that people want to consume. Let’s say that we were in the biscuit industry and we had a competitor that was selling something else, that was putting us out of business. The correct response shouldn’t be to reduce the quality of the biscuits, put less inside the packet, to charge more and hope that approach works. But publishers seem to be doing just that with some products – investing less in editorial, making the magazines shorter and then increasing the price. No wonder customers go elsewhere.

If you look at The New York Times and the Washington Post over the last couple of years, both of those are having huge success on their circulations, particularly on their digital circulations, because what they’ve decided to do under Trump is to make their journalism better. They made their journalism more incisive/investigative, and made their access points easier for their customers to do business with them.

We spend a lot of time at Dennis making sure that it’s easy for our customers to buy a magazine, to find out when it’s going to turn up, to renew their subscription – because you want to try to remove as many barriers to the relationship as possible.  You want buying a magazine to be easy.

The 41st FIPP World Congress is the industry’s flagship global event. With an agenda designed to challenge and stimulate thinking, delegates from 45+ countries around the world attending, and a marketplace to browse cutting edge tech and to socialise, it’s an opportunity to learn, network and have fun. The Congress takes place from 9-11 October 2017 at Tobacco Dock in London. If you haven’t yet, sign up for it here.