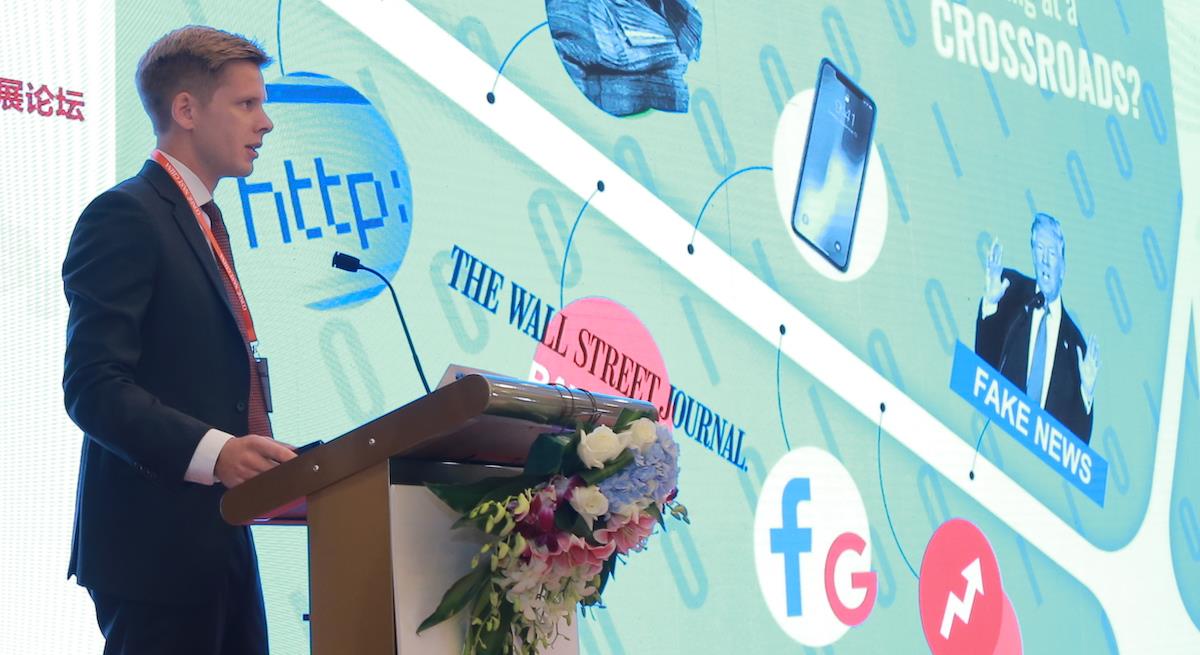 “I think it’s fair to say that publishing is somewhat at a crossroads at the moment,” says Joe Martin, vice president for commercial partnerships for the Wall Street Journal. “The evolution of news has sped up in recent years. This period of accelerated change has posed many challenges to publishers, some of which have had negative implications. But there are also reasons to be positive and Dow Jones remains cautiously optimistic.”

As publisher of the Wall Street Journal, Dow Jones is conscious of the changing habits of media consumers not only in the US, but now also around the world.

“The reality now is that only about eight per cent of people get their news regularly from the newspapers and this change in consumption habits has led some publishers, particularly traditional publishers and us included, to entirely rethink their business models. On the flipside of that it also gives us an opportunity to engage with our audiences in an entirely different way. Whilst advertising spend globally is increasing, the allocation of those advertising dollars has changed significantly over the last five to ten years. We now have platforms like Google and Facebook taking over 50 per cent of global advertising revenue and depending on which data you refer to, about 80 per cent to 90 per cent of growth.”

“We have also seen a disruption by way of some hybrid media organisations, like BuzzFeed and Politico for example, and that also changes the picture and offers fresh competition for our readers time. At Dow Jones we are quite lucky that we made a key decision about 20 years ago when we first brought our content online, that we should be charging for digital content. At the time this was somewhat controversial and has raised some eyebrows but now it has proven to be the right decision not just for us but I think for many other global media organisations around the world.”

In a world of ever evolving digital-offerings, the wheels of change can also work in favour of traditional media companies, as well as against. Particularly as Martin says, in an era of fake news, when the virtues of traditional and trustworthy journalism are more crucial to society than ever before:

“Probably one of the most disturbing facts of the new reality is the quality of professional news is now under attack like never before, from Russian bots to high office. I think it’s important, especially as someone on the commercial side of news, to sometimes take a step back and remind ourselves of our mission as a business and duty to society. At its very best, professional journalism holds the powerful to account and uncovers any wrong doing, playing a pivotal role in any functioning society. Therefore, the need for high quality journalism has never been more critical.”

“Whilst trust in platforms has declined the trust in journalism has rebounded. Average usage of News on Facebook has changed from 42 per cent in 2016 to 36 per cent today. Live journalism is our unfiltered platform for newsmakers and experts to talk about today’s issues and is something we have really doubled down on in recent times.”

Like many other major news outlets assessing the media landscape in 2018, WSJ has spent a lot of time looking at its subscriptions model. Martin admits that while the current president of the United States may not be to everyone’s taste, Trump and contemporary cultural factors like him have given rise to a newfound interest in subscribing to quality journalism.

“For about 18-19 years our paywall remained about the same. We actually took the decision of where the content sits (behind or in front of our paywall) away from the newsroom and made it a commercial decision driven by data. So effectively now we are able to give a different experience or different messaging depending on what we know about readers, where they come from or who they are, and effectively their propensity to buy a subscription. This has been a very positive change to subscription growth for us.”

“Of course this isn’t at all possible without an investment in our newsfeed as well, which of course many of you can relate is expensive. The core areas we looked to invest in our AI, audio, staff and of course video. Stories may be the life blood of our industry but monetising them sits at the heart of it and monetising them in a way which is fair towards professional journalism and safeguards the future of our industry has often been the challenge that most publishers will have been grappling with at the moment.” 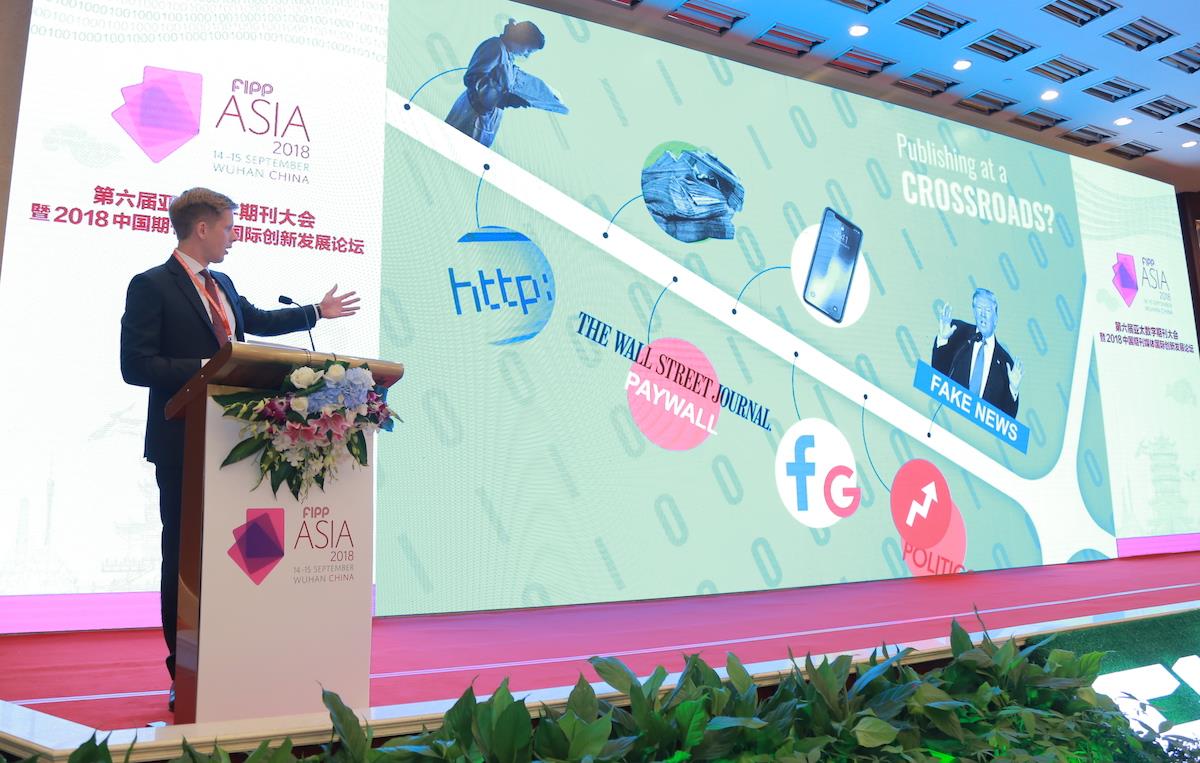 “So what about the business case? From our data we see a clear flight to quality news, as trust in social declines. That has coincided with what we refer to (at least in the western media) as the ‘Trump Bump’. i.e. regardless of where you stand on the current US President, one thing that is hard to dispute is that he is very good for selling subscriptions. In fact, grouped with some of the other challenges that I have already talked about – we touched on changes to the publishing industry after declining print and digital advertising – this is how it’s underpinned our global strategy. From where we were three to four years ago with a declining number of subscriptions, we today have had about 40 per cent membership growth, which continues to increase.”

“That’s not to say we have found the magic formula for success. We still face some of the same challenges that other news organisations have, but this strategy has also been successful for a number of other large media companies like the New York Times, Financial Times, Washington Post, etc. For all publishers, it’s time to really question the value of your content and whether you should be giving it away for free.”

As an early adopter of paid-for-content, the company has had a head start on many of its competitors. It is now looking to leverage this experience even further, and builds subscription-based planning into its international partnerships strategy.

“Internationally the picture looks slightly different. If we look at our flagship publication, the Wall Street Journal, the publication has suffered from a perception problem in that global audiences have often viewed it as a US-centric outlet. But we also know that once we engage with the target audience the perception changes quite quickly, so what we look to do is to grow our membership internationally by partnering with other established media organisations that already have established presence in the markets we want to target.”

“From North America and Canada, to South America, Africa, Middle East and of course Asia – Japan, Korea, Hong Kong, Malaysia – India and then Australia. All of these partnerships have a mutually driven subscription for us and our partners. What we look to do is leverage our brand, content and subscriptions alongside our partners to help improve our three main areas: acquisition, engagement and retention.”

In Japan, the company is working with an existing news outlet, and has created a media partnership that Martin explains has been highly beneficial to both sides.

“One of the markets that is particularly interesting is Japan. For those of you who do not know we publish in English, but also in Japanese and Chinese as well. Japan is a very unique market for news. Whilst having only a third of the population of the US, it actually has three of the largest newspapers in the world and a very unique high level of engagement, with about 70 per cent of adults reading newspapers every day, of which about 90 per cent actually subscribe. Conversely, it’s probably also fair to say there has been quite a slow transition to digital, although that is beginning to change now as well.”

“News Picks is a Japanese language news aggregator that uses third party sources, but also produces its own proprietary quality content. They amassed quite a large following of engaged users over a period of time before looking to launch a premium paid channel, but had struggled I think it is fair to say in the early days to amass a paid subscriber base. To assist subscriber growth, we launched our partnership with them, where every premium subscriber also got access to the Japanese version of the WSJ in a fully seamless integration. Since then the partnership has gone from strength to strength in increasing the number of paid subscribers significantly.”

“Of course we can’t take all the credit for that growth. We’re simply one of the reasons they have grown. But it’s this combination of a robust product and intimate knowledge of the customer coupled with international news, that means the WSJ subscription has shown to be a win for both parties.”

Ultimately, Martin’s opening statement that the traditional publishing industry currently stands at a crossroads rings true. Quality content is the driving force for successful media companies, but monetising it makes that engine sustainable.

“I often hear concerns when speaking to publishers that people don’t like to pay for digital news, particularly in areas like India, Korea, China, etc. And that putting up a paywall can lead to decreased traffic and therefore in turn decreased advertising revenue. The key is that rather than just suddenly putting up a paywall overnight and locking the content, perhaps you can create a new vertical for just a portion of your audience and if you are perhaps able to combine that with partner content as well, and create something of true value, people will pay and this has been proven.”

“While content is ultimately at the heart of our offering, using partnerships and similar strategies to reach previously disengaged audiences in order to monetise that content, is for us proving the key to the growth that we all want to achieve.”