Houzz, A California-based home remodelling and design platform founded in 2009 was showcased by Meeker as the posterchild for the triple-C business model. Today Houzz is valued at US$4B. 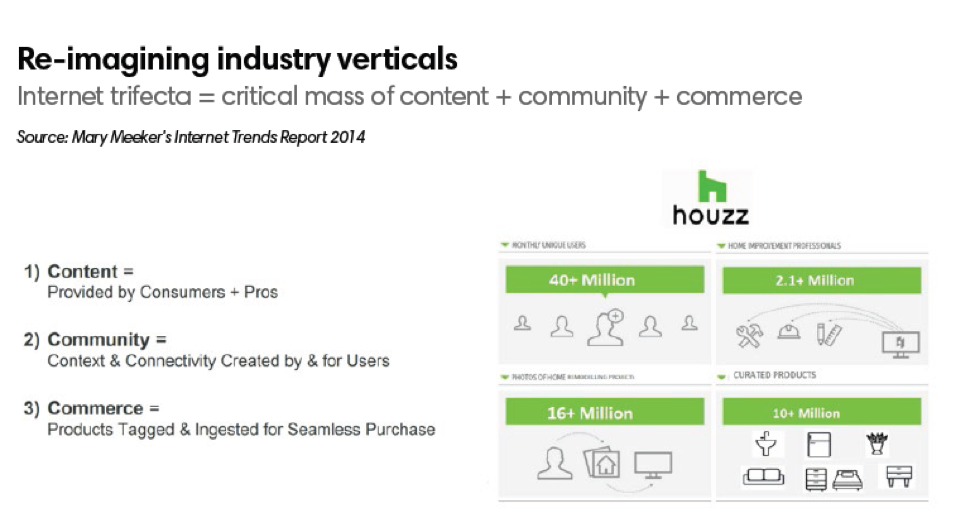 Futurist Ross Dawson reiterated Meeker’s sentiments about the model in 2015 in his keynote speech at the INMA World Congress, calling the trifecta of trusted aggregated content + community + commerce the future of media.

Publishers should excel at the 3 Cs

Content, community, and commerce when combined effectively have fuelled financial wins for many businesses, but not a lot of them have been newspaper and magazine publishers. National Geographic (Nat Geo) is an exception.

Through continual innovation the 130-year-old content brand evolved over time by reinventing itself into an experience brand where content is a piece of the diversified pie – a very important piece. As a non-profit arm of a joint venture between 21st Century Fox and the National Geographic Society, Nat Geo is valued at ~US$1B and reaches over 54 million readers in 172 countries in 43 languages through print, digital, video, TV, merchandising and, most recently, virtual reality channels.

When people look at the iconic brand today, they probably think it has had an easy go of it given its niche dominance, financial backing, and non-profit status. But Nat Geo has had just as many bumpy rides as its cohorts – bumps it navigated with courage, tenacity, and a willingness to experiment.

And despite of its setbacks along the way, the publisher is proud of its history; it’s just not shackled by it. Therein lies its differentiator. National Geographic continues to innovate and experiment to ensure it remains relevant for the times and has proven to be a master at capitalizing on the power of the trifecta of content + community + commerce.

There’s no doubt that there is money to be made with the triple-C model and many publishers have a lot of the pieces, so why isn’t it working? Here are some thoughts…

Every time we talk about what makes a publisher successful, whether that be in terms of reach, the number of subscribers, revenue, social media engagement, journalism awards, or whatever, the thing they all have in common is journalism excellence. Their content is high quality, it’s trusted, it’s unique, and it’s engaging.

Publishers that fall into that category are no strangers to us – The New York Times, The Wall Street Journal, The Guardian, The Washington Post, Financial Times, The Economist, El País, The Times, Vogue, Vanity Fair, and Newsweek.

There are others of course who deserve recognition, but overall it’s a small group compared to the majority of media companies (particularly newspapers) whose content originates more and more from newswires.

Our industry is busting at the seams in commodity content.  And it’s not sustainable. What is sustainable is content that moves people to act and Nat Geo probably does that better than anyone.

Its photo journalism and storytelling is tightly aligned to its mission “to increase knowledge through science, exploration, and research” – a mission global citizens can rally behind and support. Zooming in on climate change, racial and gender inequalities, wildlife and marine preservation, and social sustainability, Nat Geo gives people actionable information so they can help change the world for the better.

Nat Geo is also a purpose-driven brand that’s investing in a new generation of change makers. Despite its current audience skewing towards middle aged males, Nat Geo is investing in future generations by introducing VR content into its repertoire to captivate and entertain Gen Ys and Zs.

“People come for the content, but come back for the people.”

While some newsrooms recognise that community engagement isn’t about clicks, shares, likes, and page views, too many are still stuck in the historic norm of the “I create, you read” paradigm. And it’s costing them in terms of consumer mistrust, apathy, unwillingness to pay, and no second chances.

Community is about caring. It’s about inclusiveness. It’s about giving without expecting to receive something in return.

In a thriving community, the members are the real story, not the content around which they converse with each other. Published content is really just a catalyst for more intimate conversations. A number of media and retail brands recognise this and are starting to incorporate user-generated content (UGC) into their editorial. Because they know that UGC combined with professional content increases brand engagement by an average of 28 per cent.

National Geographic does this through its Genographic Project – a multi-year research initiative where scientists analyse historical patterns in DNA from participants around the world to better understand our shared genetic roots. To date over 900,000 people from 140 countries have purchased the DNA kit.

And while the research results are reason enough to pay attention to the articles about the findings, what I found even more interesting was the publisher’s invitation to its community to share their DNA stories. Incorporating UGC into its journalism isn’t new for the publisher. It’s been doing it for years with campaigns like #WanderlustContest in partnership with Honda, as well as its annual photography competitions.

And when it comes to social media engagement, National Geographic is recognised as a thought leader.  Unlike many publishers who write stories first, with social media as an afterthought, Nat Geo employs cross-departmental and cross-functional teams to figure out how to produce the content before it is created so that it tells the story most effectively across all social platforms. It also gets up close and personal with its fans on social.

National Geographic is the most-followed non-celebrity brand on Instagram because instead of using marketers to post content on social, its photo journalists themselves take centre stage on the platform – personally posting their work and their passion for photography for their fans. 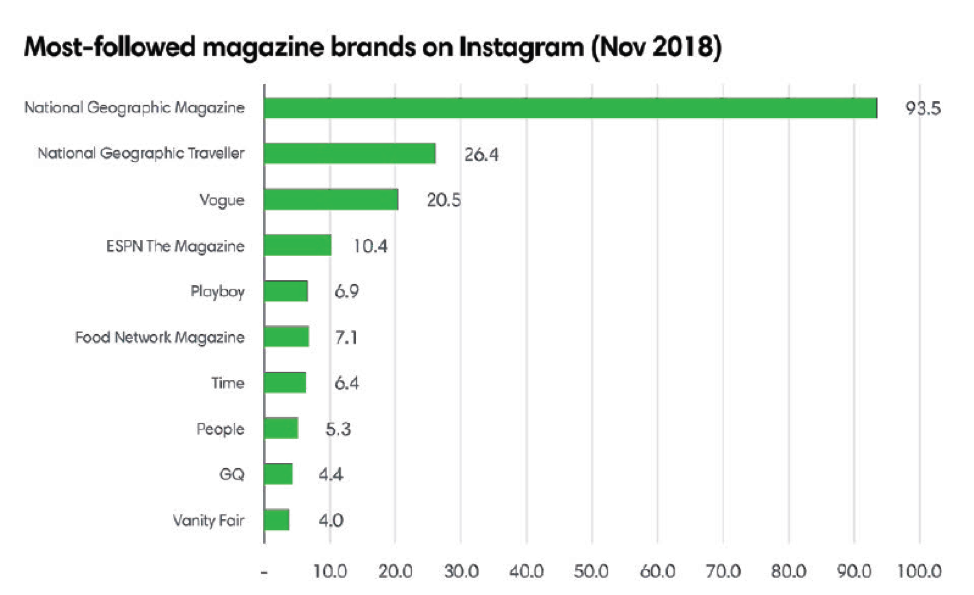 Commerce requires a commitment to change

But despite that, most industry conferences I attend only want to talk about those two revenue streams. In the press release issued before a recent major publishing event reader revenue made up practically the entire agenda.

“Major news organisations will celebrate the success stories of the early adopters, which have experimented with a variety of approaches such as hard, metered, freemium and hybrid paywalls, micropayments, reader donations and memberships, and tapped into new revenue streams.

“Publishers will share how they have grown digital subscription income, which is far less volatile than income from third-party platforms and programmatic buying. They will talk about how they have determined readers’ propensity to pay and persuaded audiences to pay for quality content.”

I am sorry, but I can’t help myself when I say that I found the reference to “early adopters” unsettling.  To me reader revenue is a laggard’s play. Paywalls and subscriptions have been around for many years.  There’s nothing new here.

Yes, I know it’s easier to stick to what you know, but repeating the same mistakes over and over isn’t working. In fact, it’s insane. Diversifying and stepping out of our comfort zones is scary. I agree and I empathise. But it must be done.

Income diversification is fundamental to survival, even if the long-term potential of some ideas are, as yet, unproven. Some small-market newspapers are seeking to diversify their income streams and secure their futures because, frankly, they have no choice.

That’s all great, but how much attention and investment is really happening in these non-traditional income streams?

According to Digiday’s October 2018 survey of media executives, advertising will drive 69 per cent of revenues next year; 13 per cent will come from reader revenue, and 10 per cent from ecommerce.  Events, which have accounted for up to 20 per cent of revenue for local newspapers didn’t even make the list. If this is typical of a diversified income model then I’m even more worried about the future of media. 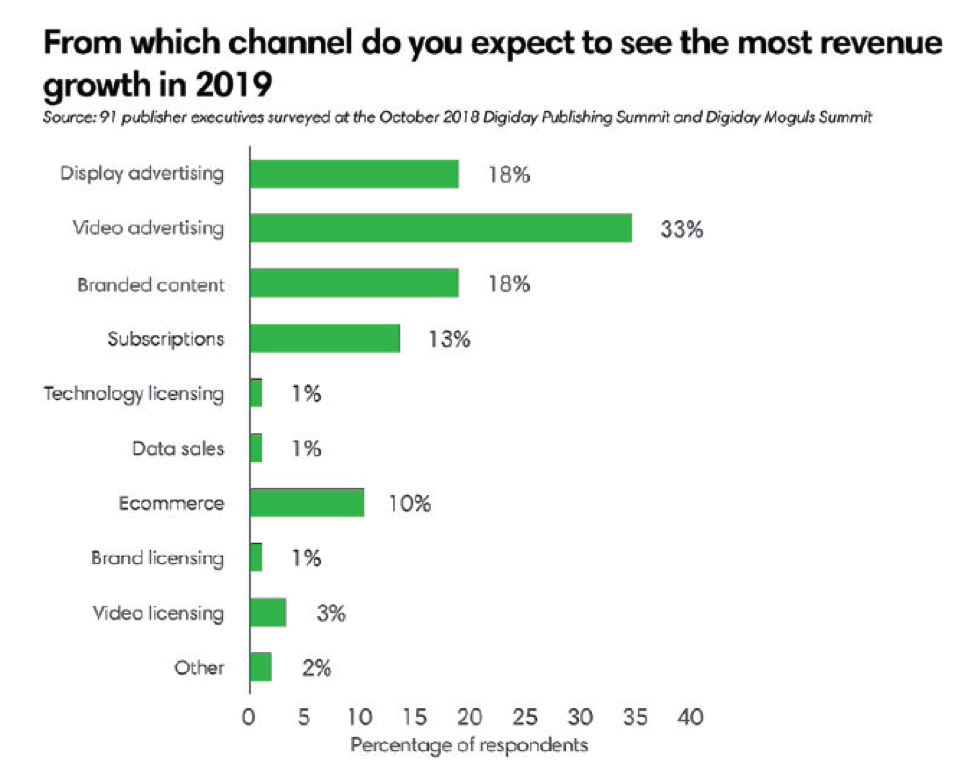 Brand licensing was particularly disturbing. The potential here is huge and proven by the likes of Meredith whose licensed products brought in US$23B in 2017. 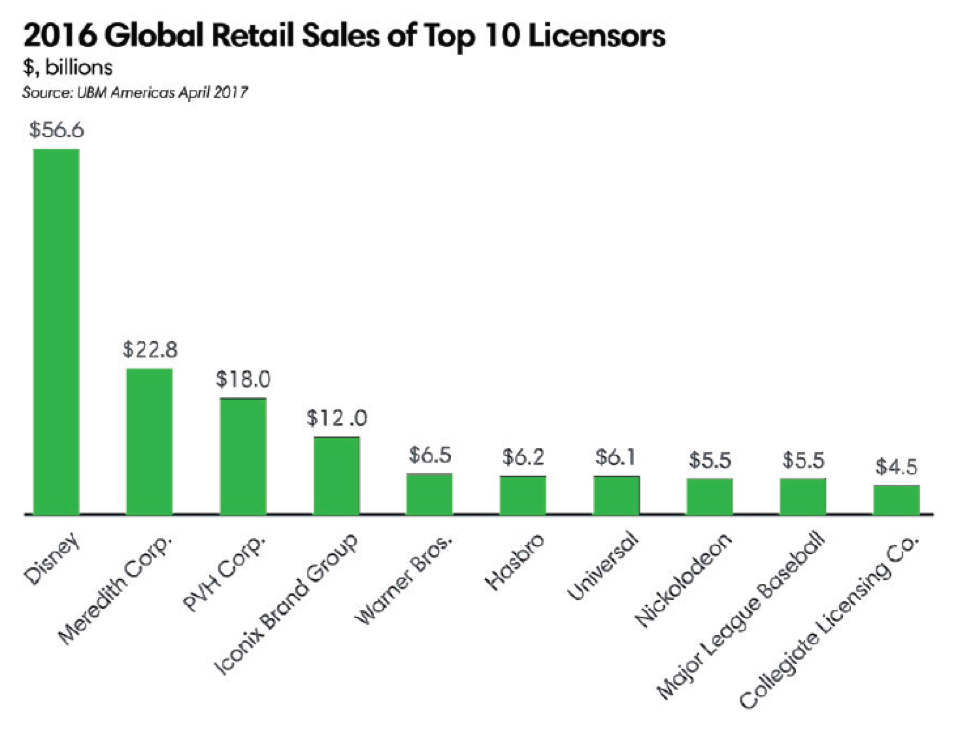 Another Digiday survey reported that 53 per cent of publishers have some form of ecommerce revenue, but only four per cent of them were able to generate any substantial income from their efforts. Dennis Publishing was one of the minority.

The independent publisher started selling cars online in 2016 with the goal to drive 25 per cent of its total revenue by the end of 2017. Dennis exceeded expectations. Its Car Throttle site’s sales grew to 40 per cent of Dennis’s overall revenues in just one year.

I’ll try not to beat this dead horse much longer, but this has to be said. I understand that mainstream media has had a really rough time over the past two decades. The internet turned it on its head like it did with almost every other business on the planet.

But what I don’t understand are the publishers who think consumers owe them something. Our audiences owe us nothing. They’re trying to get by in this crazy mixed up world as much as we (and all the other businesses in the world) are.

Imagine it’s 1906 and you’re the editor of National Geographic. Would you have the courage to break an 18-year tradition of publishing the written word by turning the publication into a “picture book” – incurring the wrath of board members? Would you have stepped outside of the safety net and tried something completely new and outrageous?

You can say, “Well things have changed since then.” And you’d be right. They’ve change so drastically that taking risks today has a better chance of sustaining an industry than not taking them. Status quo in our rapidly changing world is a death sentence.

Publishers can consider themselves “early adopters” by trying every new form of reader revenue possible, but they’re just playing in the same old subscription sandbox. Or they can consider themselves pioneers of a new future by reimagining prosperity “outside the box” where the unknowns are scary, yes, but the rewards could be revolutionary.

The media world is overcrowded with owners whose only mission is to save themselves by doing what comes naturally. Isn’t it time to embrace a new mission that gives back to the community we so desperately need by thinking like the founders of Houzz – a husband and wife team that saw a consumer problem and launched a company to solve it?

It’s your choice and a tough one that shouldn’t be made in isolation. Let’s work together to find a new mission and vision for our industry that serves others and not just ourselves. I’d love to be a part of that conversation. Let’s talk!

FIPP Insider South Africa: Join a select group of world-class speakers from the local region and across the globe, sharing their knowledge and insight. In addition to this, delegates will have plenty of opportunities to network with their peers from across the media industry. Click here for Cape Town and here for Johannesburg.