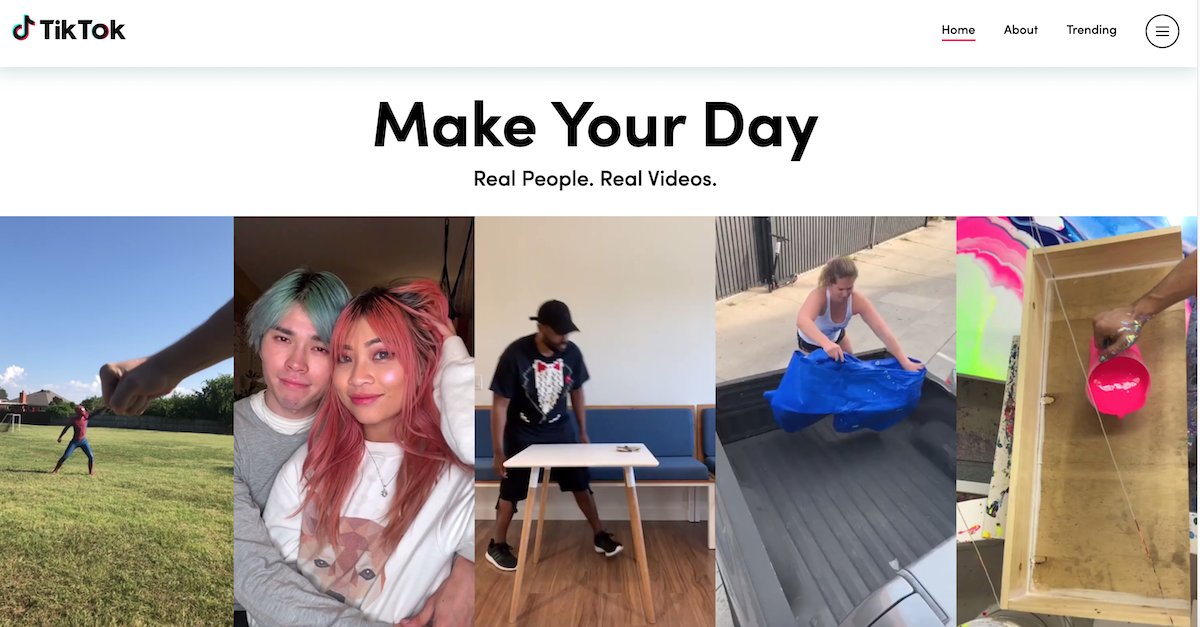 “Tired of the trolls and infinite screaming on Twitter? Try the infinite video memes on TikTok,” wrote Christine Schmidt in an introductory article to the social video app for NiemanLab in June of this year: “perhaps the most successful new social platform among American young people since Snapchat more than a half-decade ago.”

Since then TikTok has gone from strength to strength. In September, the company issued a press release titled ‘TikTok celebrates one year of successful brand collaborations in the UK’. Earlier this month, What’s New in Publishing reported that the app now boasts an audience of “over half a billion active users worldwide, with two-thirds of them being under 30.” At the same time, the app cemented it’s arrival from one side of the pond to the other – as well as its emergence into the social media mainstream – when a video created by Team GB Divers Daniel Goodfellow and Jack Laugher started doing the rounds on Twitter.

Of course, TikTok did not originate in either the US or the UK. Unlike most international social media channels, it is owned by a privately held company in China, and this developmental history is one of the things that makes the app so intriguing…

– In 2016, China-based technology company, ByteDance, launched Douyin, a social media video app available only in China. According to Wikipedia, Douyin took just 200 days to develop, and within a year had amassed 100 million users.

– A global version of the app was then launched in September 2017, under the name TikTok, and made available exclusively in international markets. In fact, even TikTok’s servers are not based in China, but rather in the countries in which the app is available.

– In the same year, ByteDance reportedly spent up to US$1billion to purchase musical.ly, another China-based company with an office in Santa Monica, California.

– Having originally been founded in 2014, musical.ly was centred around the creation of 15sec – 1min lip-syncing videos that used accompanying soundtracks, and by June 2016, had signed a major record label deal with Warner Music Group (WMG), allowing its music to be licensed for use on the musical.ly platform and its users to interact with WMG’s artists and songs.

– In August 2018, this app was merged into the main TikTok platform, along with its estimated 200m+ registered user accounts, and a social media star was born.

– Today, TikTok is available in 150 markets and 75 languages around the world, and together with sister app, Douyin has hit over 1bn downloads globally.

– TikTok allows users to create videos that are up to 15 seconds in length. Multiple clips can be strung together to create a 60 second offering, and longer videos that have been recorded outside of the app can also be added.

– TikTok’s biggest emphasis however, is on engagement: users are encouraged to interact with one another by recording reaction, duet, and challenge videos, which constantly move the audiovisual conversation on from one clip to the next.

– In many respects and in contrast to a platform like Twitter, it’s an app that builds empathy through actions, rather than opinions – media account manager, Paco Camuñas, has even gone so far as to suggest that TikTok may represent the emergence of a new audiovisual language, in which users are able to communicate emotion and meaning through the use of music, appearance, and movement.

For publishers looking to leverage TikTok, the current opportunities really fall into the following five brackets:

And to keep things concise, let us just take a brief look at each of them here:

There’s no doubt that TikTok, and the next wave of video-engagement apps that will surely follow it, hold the key to reaching the coveted Millennial and Gen-Z audiences that the publishing industry has longsince been chasing. We’ve already noted that the app now boasts over half a billion active users, and engagement levels are also extremely high, to the point that it has rolled out its own features to help users curtail time spent. If there ever was a fear being expressed by the traditional media industry that outlets would no longer be able to retain audiences due to diminishing attention spans in the social media age, then TikTok at least appears to have rebuffed that one.

Brands are already onto this. The Rugby World Cup is currently having a blast on the platform, with 90,000+ users to date, and fashion brands like Burberry have also begun to experiment.

Of course for publishers looking to leverage any new channel, the key consideration is always to be able to tailor content successfully to it without damaging brand reputation, editorial integrity, or annoying users.

One pioneer in this area has been the Washington Post. In August, a number of publications including Journalism.co.uk reported that the newspaper had amassed 78,000 TikTok followers in three months, and was covering the news in a way that fits in with the culture of the platform: “For example, Dave Jorgenson, created a skit to cover the news that Spiderman will no longer appear in the Marvel cinematic universe, due to a dispute between Disney and Sony. Production time varies from as little as ten minutes to as much as two hours, depending on the video. Jorgenson films on his iPhone and uses Premier Pro to perfect timings and add text, then creates special effects in the app before posting.”

At the time of writing, the Washington Post’s TikTok audience had reached 173,000 followers – with a daily print circulation of 357,000, these are social media numbers that are hard to ignore.

While advertising on TikTok remains in its early stages, and like many social media platforms before it, more robust in some regions than others, there are clear signs that the app is making positive moves in this area.

Recently, AdAge reported that a ‘leaked’ TikTok pitch deck had been doing the agency rounds, showing five clear ad-solutions to deliver in-app advertising: Hashtag Challenge, Brand Takeover, In-Feed Video, Branded Lenses, and Top View. As of right now, these packages appear to be straight forward ‘pay-to-play’ options, with more sophisticated content/revenue sharing partnerships potentially a long way down the line. But with the additional option of ‘Custom Influencer Package’ also included within that deck, and no specific price bracket next to it, it’s apparent that TikTok may be open to suggestions from the right content providers.

Interestingly on this front, as reported by WARC, “TikTok has publicly stated that it will not allow paid ads that promote a political agenda on its platform, reiterating the terms set out in an existing policy.”

This may well be a smart move, certainly in the early stages of providing an ad-offering. We know how much scrutiny more longstanding global social platforms have come under in recent years as regards political ads, and the fact that TikTok itself has already raised eyebrows regarding privacy, cyberbullying and even national security concerns, will likely be adding to a feeling of caution.

Whenever you have a new media spotlight shining on the cultural zeitgeist, it is inevitable that new narratives will emerge. Will Smith is now on TikTok, according to WIRED, and like YouTube and Snapchat before it, the channel is also already giving birth to a new wave of social media stars within their own right. Particularly for the news and entertainment sectors of the press, this offers the opportunity to cover new stories emerging from a new area, and relevant to young audiences.

We recently looked at how more traditional content offerings can be born from existing digital communities, such as Hearst’s Airbnb magazine. Cultivating content from TikTok need not necessarily be so regimented, but as a growing staple of digital media consumption it can certainly provide a resource.

As a follow-on from that, analytics is probably the wrong word, because what we are really talking about is leveraging TikTok as a listening channel in the same way that the likes of Facebook and Twitter are already being used today. We know that the audiences on this channel skew particularly young, and paying close attention to their behaviour and the ways in which they like to consume media can hold wider benefits for traditional publishers.

This is not just true from a content point of view, but also referring back to what Paco Camuñas called a new audiovisual language, simply having a presence on these channels can provide new insights into how digital technology is developing, and provide innovation ideas that can then be applied to your own platforms.

In summarising the macro opportunity that TikTok provides to publishers, it is worth remembering back to the words of Christine Schmidt, cited at the beginning of this article: “perhaps the most successful new social platform among American young people since Snapchat more than a half-decade ago.”

Such terminology may make for slightly uneasy reading, particularly for publishers chasing Millennial and Gen-Z audiences. After all, where up until fairly recently we talked about companies like Facebook being ‘just 15yrs old’, the phrase “more than a half-decade ago” reflects the rapid pace of change that now fuels the social media sector: of waxing and waning, migration and exodus, eyeballs constantly shifting from one stage spotlight to another. Indeed, particularly when it comes to social, we now appear to live in an age of ephemeral platforms, let alone ephemeral content.

But in a way this is part of the opportunity. As magazine brands migrated online, they had to find a way to reinvent publishing from weekly and monthly print cycles, into a daily process. And they did. Platforms like TikTok may come and go, but by taking a process driven approach to content creation and monetisation, publishers can ensure that they are ready to hit new digital touchpoints, without necessarily betting the farm on individual platforms.

TikTok shines a light on how younger demographics are consuming digital media, and the highly user generated and conversational forms of content that are now preferred. The technical capabilities provided by the app may well prove to be a mere stepping stone on the pathway to the next social trend. But by fully engaging with them, and using the platform as a means of generating new processes, as well as immediate outcomes, TikTok can provide publishers with a great opportunity for audience and product development.

Enhance your storytelling experience: visit the movie capital of the world