Wired has even written about their guest editors. “Since the magazine began, there have been eight issues with guest editors, ranging from architects and athletes to game designers and A-list directors,” former staff writer Kevin McFarland wrote.

Here we look at a recent guest editorship at Good Housekeeping.

The Hearst brand partnered with Marvel Comics character Deadpool for a special issue recently. “It was a surprise and delight moment for us,” explained Jane Francisco, editor-in-chief of Good Housekeeping magazine. “As a brand, we are interested in co-creating unexpected, smart, unique experiences — this checked all those boxes!”

She explained that the Deadpool team was looking to generate some excitement for the upcoming film. “We thought it could be fun to have Wade get in on the action to help us celebrate the holidays — so we created 50,000 limited edition issues of Good Housekeeping that were distributed in eight major cities across the country as well as in Toronto and Vancouver,” Francisco said. 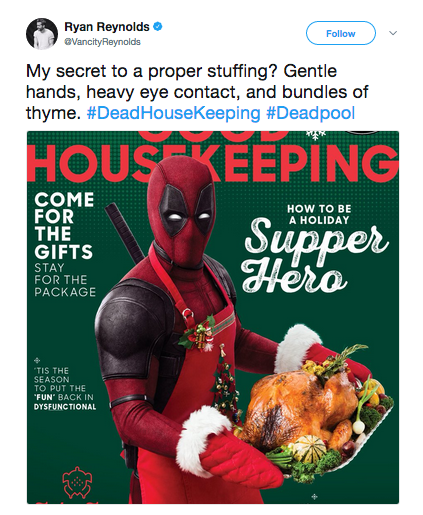 The special issue included a holiday letter from the character and a couple of articles that sound like they would fit into a regular holiday issue of the magazine but definitely have some Deadpool-esque attitude, like “How to Carve a Turkey.”

“The entire Deadpool team, including Ryan, was extremely involved in this—collaborating on both the editorial direction and on set,” Francisco said. “We couldn’t have asked for better partners than 20th Century Fox. Our teams worked in lockstep to ensure the creative was authentic to Deadpool and also Good Housekeeping. And yes, that’s actually Ryan in all of the photos, as Deadpool of course!”

In the past, Good Housekeeping has worked with Shonda Rhimes, Melinda Gates and most recently Natalie Portman as guest editors, according to Francisco.

As Francisco explained, a guest-edited magazine offers a way for brands to layer in different perspectives, brainstorm new ideas, and also offer their fan base a chance to connect with them on a different, more personal level.

While inviting someone outside of publishing into a magazine office to offer their input may be exciting, staff often have to manage contributions from falling outside the brands’ values. Francisco explained that in bringing in guest editors for Good Housekeeping, there is a constant dialogue to make sure every side is covered. She said the FOX/Deadpool team were a dream to work with from inception and development to the final product and execution.

Bringing in guest editors is something other publishers might think to start, if they’ve never appointed one before. “It’s a great opportunity to change things up, create new conversations and maybe even capture a new audience,” Francisco said.  “Be daring and take chances. You never know what amazing things will transpire.  No one would expect Deadpool and Good Housekeeping to make sense, but when you see our special issue — it does.”

What to expect as Hearst Magazines’ new Airbnbmag hits the streets