This is the view of Nick Bogaty, senior director and head of digital publishing at Adobe. He spoke to FIPP’s Cobus Heyl via Skype as part of Adobe’s sponsored content series on FIPP.com. This is the first of a three articles from the conversation – the next one answers the question why Adobe talks about “content first”, and the third one “what’s behind Adobe’s quest for a better mobile experience.”

The series, including a free webinar to FIPP.com users on 1 April 2015 (register for it here), focuses on the launch of Adobe and Fast Company’s “re-imagined mobile app.” 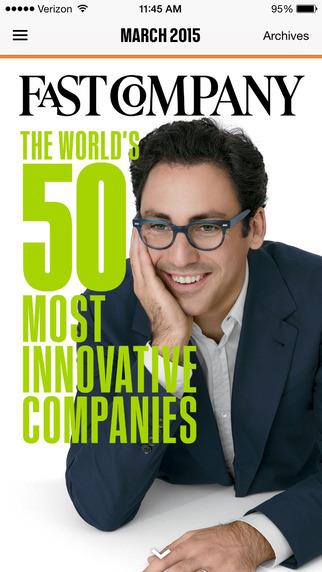 The new Adobe mobile app platform will be available to other publishers from mid-2015.

For Adobe, the journey with mobile app platforms started five years ago with the original software developed with Wired magazine. “When we made the original software with Wired, there were a lot of things that we were really successful at. One was leveraging the graphic design talent at publishing companies to produce something on mobile that was beautiful and interactive.

“We leveraged the tools that those companies used to produce printed content; Adobe Digital Publishing Suite leveraged InDesign, it leveraged InDesign-based workflows, and it leveraged graphic design talent that was print-based talent. The benefit of that was you got these beautifully designed pieces that felt familiar, it felt like print with some interactivity on it.”

Problem was, it did not really work. “While we were really successful doing that (delivering a print-like experience), that’s not really how people consume on mobile devices [where consumption is more article- than issue-based, ‘snacked’ at short intervals].

“So the challenge for us was this, there’s this print product that’s beautiful, it is still beautiful, it is engaging, and it is crafted. [But it’s produced with a fixed schedule, released as an issue only every so often.]

“Then there’s the web, with its constant barrage of information. While addictive, it can be an unsatisfying experience, which is why I think people jump in and out of websites all the time and engagement time is very low.

“(Re-imagining the mobile app experience,) we wanted to find a space in the middle…that felt like it is specifically crafted for mobile. We wanted to get the habits of the web with the habits of print and make something very specific to mobile. On the one hand it should feel like a well designed, curated experience, while on the other it should deliver a [continuous] feed of information.”

It’s not an easy thing to achieve, but Bogaty believes when you do, it puts your brand in a powerful position.

“For this kind of mobile product, a beautiful place from an audience perspective is that place between print and the web. If you can get audiences in that range and they’re really engaged, opening the app a couple of times a week, that’s an incredibly valuable audience, for advertisers, and for you to potentially to charge them for access or whatever [the business model].

“And if you can [then] build the kind of loyalty to the custom branded app where people have [it] on their home screens, I can’t imagine that there’s a more valuable audience than that. It’s a powerful place to be.”

On a separate note, Bogaty was at pains to emphasise that when it comes to other channels, it is not an either/or argument” for magazine media, but rather about best practice within each channel and channels then working together to enhance the overall brand value proposition.

Putting mobile in between print and the web “doesn’t mean publishers shouldn’t have a strategy with the other channels. I actually think that print will continue to have a very specific role in the future…people still care who is on the cover of the magazines, and publishers can still create big advertising events around it. There is still a role there.”

Secondly, “there obviously has to be a role for publishers on the web, even if just to get attention for their brands, wherever their audience is” and when it comes to social media, even “if the level of [brand] engagement is not as deep as in other channels,” non-participation will equate to irrelevance. “Whether it’s on Facebook, or whatever, they have to be involved in those communities.”

In other words, the channels, including mobile app, work together to create an overall multiplier effect in value for the brand.

• Adobe’s free webinar to FIPP users on 1 April 2015, at 3pm CET (7am PST and 2 pm GMT). The webinar will be co-presented by Kirsty Duncan, senior product manager for digital publishing at Adobe, Anne Marie O’Keefe, director of consumer marketing at Fast Company, and Morgan Clendaniel, founding editor of Co.Exist at Fast Company. Register for the webinar here. It’s free, and it’s interactive. Join to get an in-depth look into the re-imagined mobile publishing experience.

• Adobe will be at FIPP, VDZ and eMediaSF’s Digital Innovators’ Summit (DIS) in Berlin on 23-24 March 2015, where Mitch Green, director of product management for digital publishing at Adobe will, for the first time, do a live public unveiling of and in-depth look into the new solution. The session will also see one or two new announcements from Adobe, promised Bogaty. Register for the DIS here.

Nick Bogaty, senior director and head of digital publishing at Adobe, spoke to FIPP’s chief content officer and marketing manager, Cobus Heyl, via Skype as part of Adobe’s sponsored content series on FIPP.com. This is the first of a three articles from the conversation – the next one answers the question why Adobe talks about “content first”, and the third one “what’s behind Adobe’s quest for a better mobile experience.” Other than this and the webinar, the sponsored content series included news of the launch of the new Adobe app, and the announcement of the webinar.