“Watch presented Robb Report parent company, Penske Media Corporation (PMC), the opportunity to pitch video series ideas for their platform,” according to Bailey Barnard, director of Robb Report Studio. “PMC’s group of brands each submitted a list of ideas and Watch chose Secret Histories of Rare Treasures from Robb Report. Production for which Facebook funded directly—just as a TV network funds the production of content for its platforms.”

Facebook Watch, a video-on-demand service on and by Facebook, was launched in August 2017. The platform is the first VOD platform with which Robb Report and Penske are experimenting. Facebook, as Barnard explained, has exclusive rights to the content for three months following the posting of the last episode, after which Robb Report plans to roll out the videos on other platforms, including YouTube.

“Robb Report is constantly looking for new ways to reach affluent audiences, especially those with interests in the niche markets we cover,” Barnard said. “The episodes in this series tell the stories of rare cars, art, collectibles, and more—each appealing to highly engaged viewers. With Facebook’s data resources, we felt Watch presented a unique opportunity to reach those niche groups of viewers and to potentially monetise the videos through Facebook’s programmatic ads, served as short mid-roll ads within each video.”

Each of the documentaries, seven to eight minutes each, cater to Robb Report’s affluent audience but also offer in-depth and entertaining storytelling and visuals, with the aim of engaging communities.

The first episode dives into Leonardo da Vinci’s painting Salvator Mundi, which Christie’s sold last November for a record-breaking $450 million. Painted around 1500, Salvator Mundi was owned by no less than three kings and was thought to be lost to history forever before it reappeared at an estate sale in Louisiana in 2005.  You can catch ‘The Lost da Vinci’ live on Facebook here.

The series was developed in coordination with Robb Report’s editors and produced by the brand’s in-house custom-content and video agency Robb Report Studio. The Studio, according to Barnard, regularly works with editors on video projects, so it was a seamless process. “The editors’ category insight and expertise, along with their industry contacts, proved invaluable to researching and executing every aspect of filming, developing narratives, and post production,” he said. “From Facebook’s approval of the series to the launch of the first episode, the series took about six months to produce.”

Facebook’s Watch platform is designed to give viewers a deeper perspective into subjects with episodic storytelling, instead of snackable content favoured by much of social media, Barnard said. It was a perfect fit for Robb Report’s editorial, which prides itself on “its ability to tell the stories behind the products, services, and people that we cover,” Barnard explained. “Watch gives us a platform to tell these deeper stories at a very high level of documentary-grade production.”

According to sources, original video content for Watch is produced by partners, who earn 55 per cent of advertising revenue.  “It’s a bit too early to tell, but we are hopeful that the programmatic ads running through Watch will yield a nice profit. Following the conclusion of Season 1 (6 episodes), we plan to pitch Season 2 and similar types of series directly to our partners as sponsored video opportunities,” Barnard said. 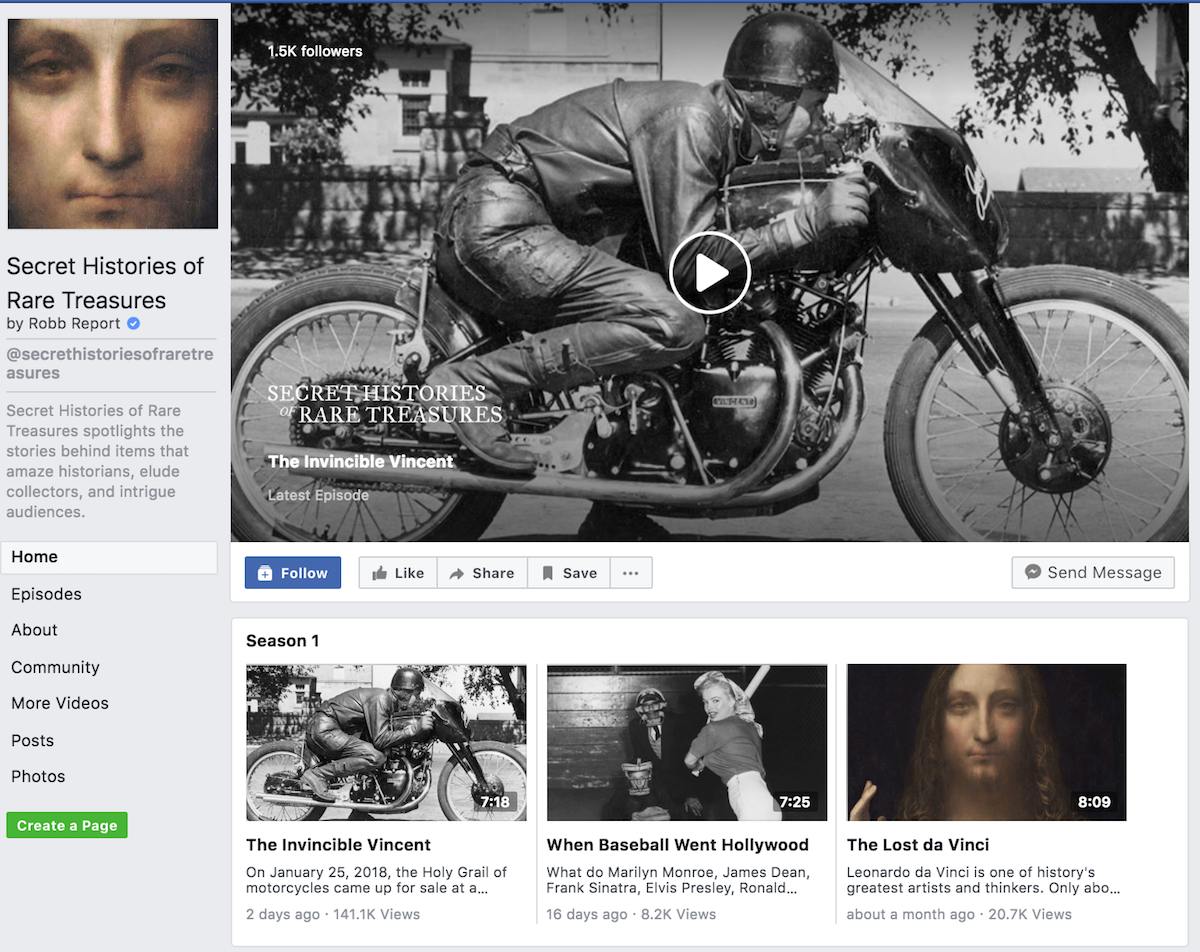 For magazine publishers, Facebook Watch is something worth exploring. As Barnard explained, all new digital opportunities are worth considering, especially given the platform’s access to audience. “With Facebook’s massive global audience and unrivaled audience-targeting capabilities, publishing high-quality video content to Watch has the potential to be an incredible way to reach specific audiences and engage them with unique visual stories,” he said.

“We are hopeful that the launch of Watch signifies a tidal shift in the way audiences consume content online. For the last decade or so, there seemed to be a move toward short-form content and with Watch, Facebook is investing in longer-form and more substantive content.”

A closer look at the Argentinian magazine market