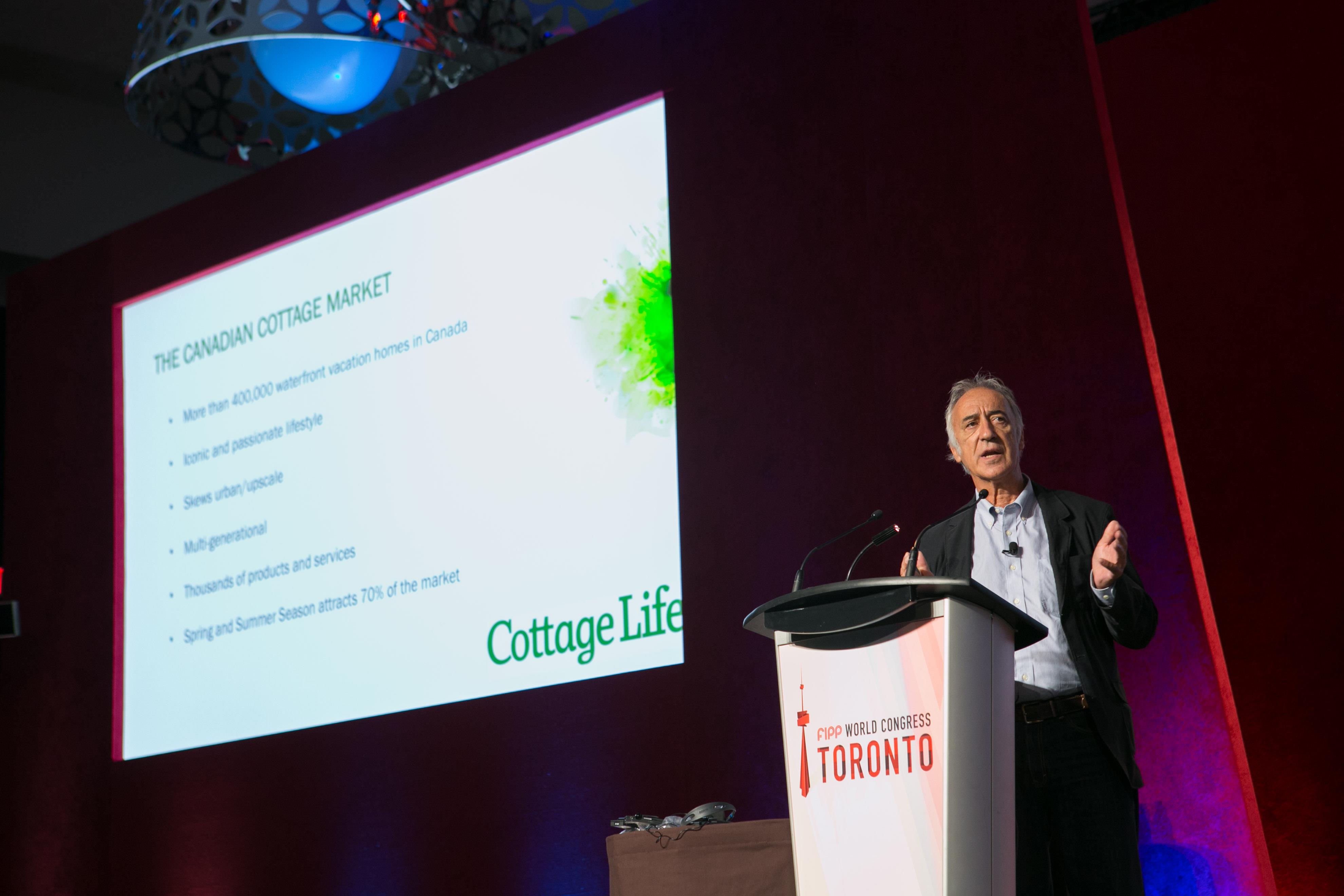 Zikovitz started the conversation: “We’re the little guy at this conference,” he said. But he was not discouraged; Cottage Life circulation has grown since the magazine went national and a boom in waterfront property meant there were more cottagers to target.

He then laid out a timeline of the inception of the magazine:

1985 – Zikovitz and his wife bought their first cottage having no experience with cottage living. Zitovitz said he struggled with all that came with owning a cottage despite being “a blue collar guy.” He was bothered by the fact that there wasn’t a magazine in circulation that could ease him into cottage life. He felt like he’d have to buy a book about boats and another building stairs and was frustrated all the information he needed wasn’t in one place.

1986 – Zikovitz was fired from his job in marketing and advertising

1988 – The first two issues of Cottage Life were printed

Cottage Life now publishes six times a year and aims to be the magazine “every cottager has to have.”

Early on, Zikovitz and his team noticed that a lot of consumers were buying Roots sweaters with the famous brand flaunted on the front. Zikovits saw an opportunity for his magazine to make Cottage Life sweaters. “People would pay us to advertise our product,” he said, adding that Cottage Life couldn’t keep up with the demand for the branded sweaters, so they made t-shirts and hats as well.

“We have more than a magazine,” he said. “We have a brand.” This is what makes the magazine and all other branches of it as successful as it is.

When Cottage Life started to produce television shows, Zikovitz met Macmillan. Zikovitz brought his friend onto the board of Cottage Life because he loved his philosophy about long-term expansion and “to a point he loved our philosophy as well.”

Blue Ant Media is only five years old, created with the idea that online video was about to become very important. Their tagline is “connecting people to their passions” which connects directly to Cottage Life’s mission.

Part of Blue Ant Media’s business strategy reads: “We put the consumer experience first by embracing new and evolving distribution platforms.” The company has put this into motion for Cottage Life by launching Cottage Life West, a national Cottage Life TV channel and a new merchandise program that all cross promote.

As much as there is a magazine at the heart of the Cottage Life brand, Macmillion says it’s a “compassionate cottager” that truly lies at the core.

Zikovitz says that since Cottage Life merged with Blue Ant Media the company has had year-to-year growth in all sides of business revenue. He showed that magazine revenue is up 25 per cent and digital products revenue is up 121 per cent between 2013 and 2015. Between 2014 and 2015 merchandise and e-commerce revenue is up 160 per cent.

“We couldn’t have done it ourselves,” said Zikovitz.

Host Milne asked if there are any barriers to revenue growth at Cottage Life to which Zikovitz replied: “It’ll go as big as the market will allow it to go.”

Milne then asked about any mistakes along the road to Cottage Life’s success.

Zikovits said that he has learned to “pick your market and concentrate on it” after hosting a weekend trade show that incorporated four different target audiences. “You can’t appeal to all people at once,” he said.

Zikovits said he worries about magazines that are just magazines and says he’s not impressed when people go digital. “Big deal,” he said. “You need more than one or two sources of revenue, if one goes soft you can tap into another.”

“You need to expand your brand,” he said. “Make sure you have strong brand and if you do – use it!”