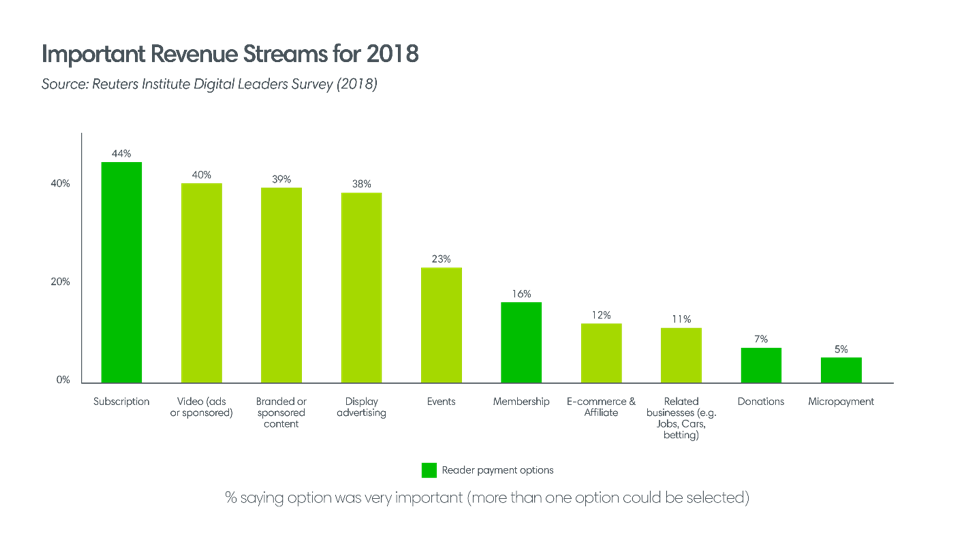 The price of subscriptions varies, but even by adding perks (e.g. fewer ads, rewards programmes, commenting access, giveaways, etc.) the growth in paying readership barely made a dent in most publishers’ bottom lines in 2017. When the Trump Bump started to wane a year ago most publishers saw revenues following suit – albeit less so for the usual suspects: WSJ, FT, WP, and NYT. 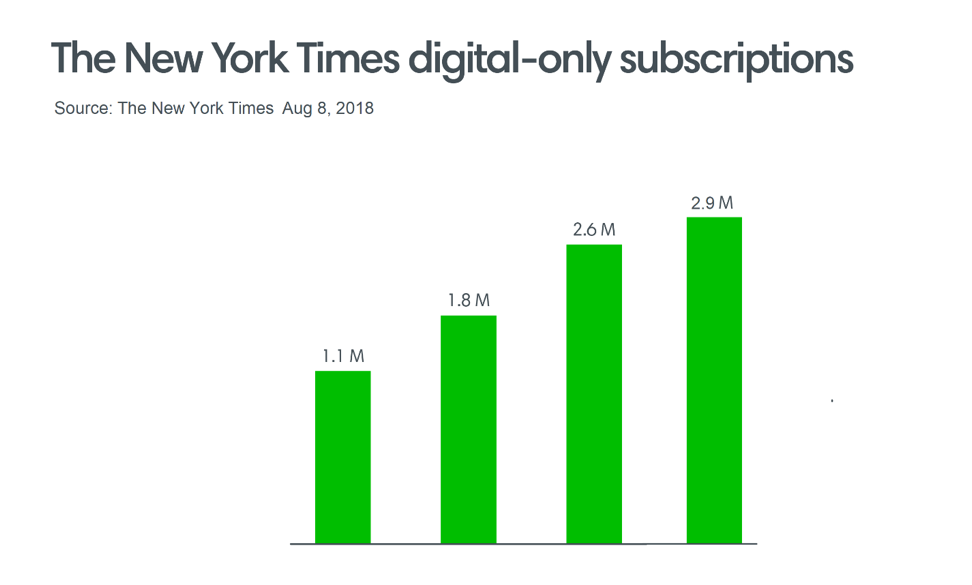 As of result of The New York Times’ enviable subscriber growth, its reader revenue crossed the US$1B mark in 2017. At the end of its second fiscal quarter in 2018, digital subscriptions accounted for ~66% of its total revenue.

Yes, there has been an increase in digital subscriptions in the past year in many countries, but numbers are still nothing to cheer about. Despite the blip in the radar, most people are still unwilling to pay for digital news (except perhaps in Norway. Takk!). 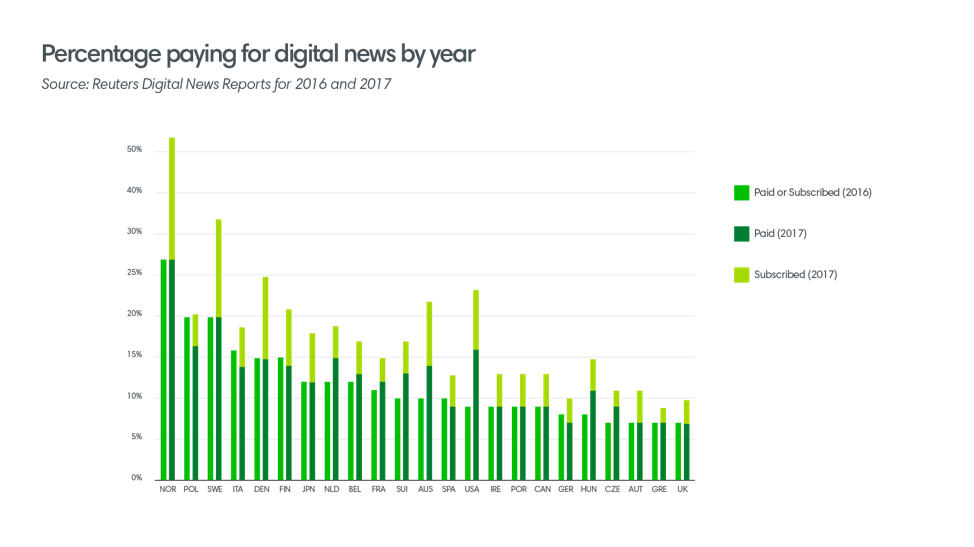 Scott Galloway, founder of NYU Stern, recently said, “Information doesn’t want to be free, it wants to be scarce and expensive.” I appreciate his sentiment, but despite what “it” wants, information is overabundant and mostly free, making it hard to justify paying for it – especially the 90 per cent of which is commoditised.

Which makes it even more important that media execs who do snag a subscriber, better work hard at holding on to them.  Because if they churn, it will cost the publisher a heck of a lot more than that person’s annual subscription fee. It’s been proven time and again that it is five to 25 times more expensive to acquire a new subscriber than to keep one.

In The News Media Alliance’s presentation, Innovations in Audience Strategies that Reduce Subscriber Churn, Matt Lindsay, president of Mather Economics shared, “In our work with publishers, we have found that retention and churn-prevention receive less investment than they deserve given the effect of reductions in churn on operating margins. A five per cent reduction in churn has been estimated to increase profit 15 per cent to 95 per cent.”

But if that profit potential isn’t enough of an incentive to minimise churn, recently Mather measured the Customer Lifetime Value (CLV) for an anonymous publisher’s digital customers and found that digital-only subscribers had a CLV of US$650, compared to US$165 for print/digital subscribers, and US$6.50 for non-paying/registered readers.

Venture capitalist David Pakman, who co-founded the Apple Music Group in 1997, knows a thing or two about churn. In his article, Churn is the single metric that determines the success of your subscription service, Pakman talks about what constitutes a good churn rate, “I look for average net monthly churn rates below five per cent. The biggest subscription winners are below five per cent per month, and usually well below per cent. For example, Netflix is below one per cent per month, Dollar Shave Club is very low, ISPs and Pay TV are also low with Dish at 1.5 per cent per quarter; Verizon Wireless and AT&T are about 1.5 per cent per quarter.”

“A churn rate of 10 per cent a month effectively means you lose (the equivalent) of all of your customers every 10 months. Those businesses are not sustainable. Churn is a reaction to your value proposition after people have tried your service. If it is high, you have a problem with the service, not with your targeting.”

I’ve always been a proponent of the use of Smart (compared to Big) Data to improve the reading experience for users and so it was good to see how behavioral analytics is helping to increase retention rates in publishing. A number of data-supported campaigns and customer-specific pricing strategies have been shown to reduce churn by 15-75 per cent.

But mobile apps aren’t faring quite so well.  According to Localytics, “We’re in the middle of a mobile engagement crisis… Too many brands have yet to shift their focus away from acquisition towards retention.”

Mobile app abandonment over a three-month period is so high in the media and entertainment sector where 72 per cent of app users churn within 90 days. Ouch! 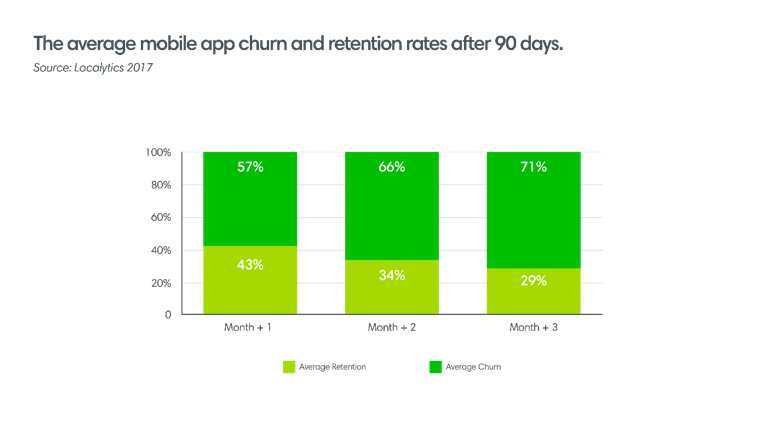 But there are ways to increase retention in apps – ways simplified by the rise of push notifications, location-based marketing, and predictive analytics.

App onboarding can help user retention rates increase by 50 per cent and in-app individualised messages can drive retention up over 300 peer cent. For those users who opt-out of push notifications, re-marketing can be a useful way to re-engage them outside the app, but be careful not to get creepy about it. Also, don’t forget about GDPR when collecting user data and gaining consent on its use. And of course, A/B test everything!

Spotify continues to focus on increasing retention in its apps by delighting subscribers with sticky perks, such as:

So how are newspaper publishers faring?

As one might expect, the big guns in media are investing heavily in reader retention through audience engagement initiatives, because they know that engagement pays dividends.

But what exactly is audience engagement?  According to a February 2018 study by the Tow Center for Digital Journalism, it is much more than just asking audiences to pay for content.  Audience engagement is…

“a set of audience-focused tasks that include identifying and interacting with people who use your site, as well as prospective audiences.

“Functions include online and offline event hosting, comment moderation, social media management (both on native platforms which don’t link to your site and networked platforms like Twitter that refer visitors directly), search engine marketing, and more.

So basically, it’s up close and personal interactions with real people. I wish I could say that this is a common strategy amongst publishers, but that would be false. However, there’re examples of how some publishers are taking the human factor seriously, inviting people to participate in the content creation process and connect with editors and journalists.

The Boston Globe used 30+ newsletters (which brought in 4,475 members a day) to increase engagement and reader revenue.  Subscriptions from newsletters generated more traffic than social media, had a retention rate of seven per cent, and increased year-one revenues by 13 per cent.

According to Peter Doucette, chief consumer revenue officer at Boston Globe Media, “Newsletters have been by far our biggest mechanism in influencing this behavior. In our experience, price doesn’t drive churn. Engagement — or lack of it — drives churn.”

The newsletter results have been impressive, but are they enough? As of mid-July 2018, The Boston Globe had only 94,797 digital-only subscribers and continues to lose money. But despite those losses, owner John Henry insists that the publication is not for sale.

Financial Times asks readers to contribute to content creation through initiatives like The Future of Britain, and callouts/questions at the end of articles and podcasts. It encourages comments between readers and journalists, issue surveys and sends out seasonal appeals to gather and publish true stories from readers on important topics like dementia.

In 2017, FT hosted 10 editorial-led “Engage” events in London to build more direct relationships with its subscribers, and attract new ones. Engagement scores for attending subscribers (from their proprietary editorial analytics tool) grew 300 per cent on average, prompting the publisher to expand the program internationally.

Newsday surveyed its subscribers about their interests and adjusted their content and newsroom (adding staff) to address subscriber needs (offering more food articles, games, and puzzles) – an initiative that added US$2.5M in retention revenue in just six months.

The Atlantic offers weekly conference calls with reporters and editors, while The Information and Digiday invite subscribers to participate in private Slack channels where they can connect with the editorial team.

What are you doing? I’d love to hear about it.

Getting people to pay

Knowing how to reduce churn is great, but useless if you don’t have any subscribers. So how do you get people to pay for your content?

At FIPP’s Digital Innovators Summit in March, Troy Young, President of Hearst Magazines shared rather bluntly, “If you are not deeply feeding a consumer need, you will die. Period!”

He’s right. According to Young, we’re facing a crisis of differentiation because publishers have lost the uniqueness that made them great. This is particularly true in the newspaper industry, where there’s an overabundance of general news products across all media. Why should anyone pay for general news online when they can get the same content on their TVs, radios, and YouTube, virtually for free? 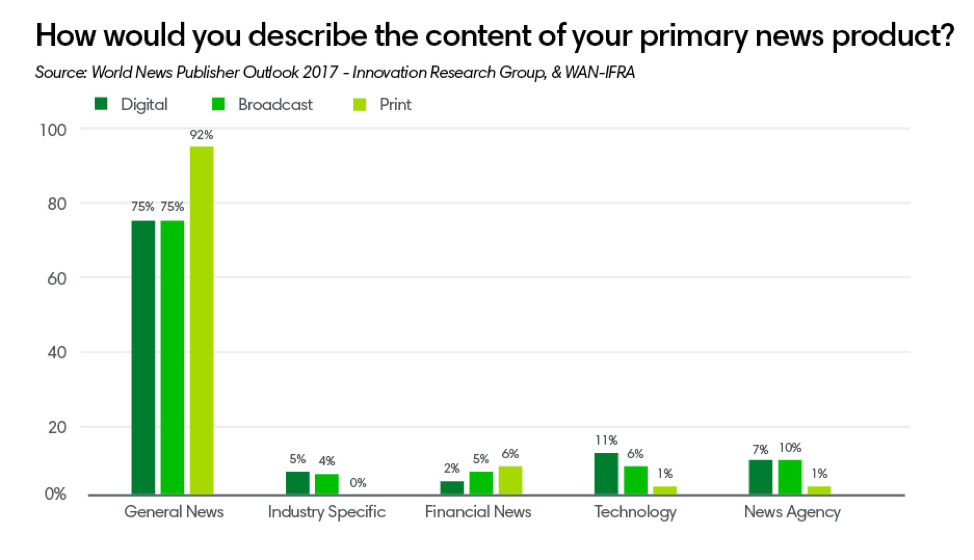 Unless general news publishers reinvent themselves, they are doomed to become trees falling in a forest. No one will hear them hit the ground (when they either die or get consolidated), and even more disheartening, will anybody really care?

The only way for newspapers to survive, let alone thrive, is to understand customers’ needs, continually feed them, and differentiate themselves in terms of voice, content, expertise, transparency, curation, user experience, communication channels, quality of service, and community involvement (especially if they’re local). These are now the table stakes to get into the publishing game.

And then there’s pricing – what will your readers pay and why? This reminds me of a TEDx talk by Rory Sutherland, vice chairman of Ogilvy & Mather Group, on the power of reframing. For example, if you were to ask a person to pay an extra toll to drive in the fastest lane on a bridge, many people would balk, thinking that the city deliberately created delays at the bridge in order to maximise revenue. “Why on earth should I pay to subsidise your incompetence?” would be their resounding cry, according to Sutherland.

But if you change the frame of reference and tell them that the extra toll money will go to a charitable foundation, the mental willingness to pay the toll completely changes. The same is true in media.

Most people are aware of the importance of the Fourth Estate and want to see quality journalism survive. But the majority of readers are still unwilling to pay for it, seeing the sorry state of the industry as publisher mismanagement.

I sometimes wonder if the executives at The Globe & Mail had seen Sutherland’s talk and decided to put his reframing strategy to the test. In 2016/17 the iconic Canadian publisher ran a campaign called Journalism Matters to demonstrate the value of its investigative reporting to Canadians coast to coast to coast. The campaign was designed to establish a direct correlation between Globe’s journalism and government policy changes – changes that directly affected people’s lives.

Not only did the campaign help grow subscribership by 19 per cent, increase time spent on the site, and improve retention by four per cent year over year, it also resulted in top-down reform across the country, improving the handling and reporting of sexual assault cases by police forces.

Dare to be different

I have a bit of a tongue-in-cheek question for you, “If your company exchanged logos with its competitor, would anyone notice?”

I guess what I’m trying to do is to make you ask yourself some tough questions, “Do you really stand out as being different from all those other publications in your space?  If so, how?  What makes you great? Do consumers know and appreciate what you think makes you great?”

Advertising tycoon, David Ogilvy, considered by many to be the “Father of Advertising”, once wrote, “Study the methods of your competitors and do the exact opposite.”

Doing the opposite doesn’t mean change for change’s sake; it means not getting distracted by the actions of those in your ecosystem. As soon as you start following others, you lose your uniqueness – your ability to shine. You just end up levelling the playing field in a game with too many players – not a recipe for success in our overcrowded media landscape.

So, instead keep your eye on the prize (your readers) and evaluate every business decision based on what makes your company great for them, not for you.