Both took to the stage on Day 2 (21 March) of DIS 2017 to present their unique insights on audience engagement through their own research and collaboration.

The Coral Project is a collaboration between Mozilla, The New York Times, and The Washington Post which seeks to bring journalists and the communities they serve closer together. Funded initially by US$3.9 million from the Knight Foundation (and with ongoing funding from various other foundations), The Coral Project is an open source venture and everything it builds is free and open-source for journalists and media companies to make use of. 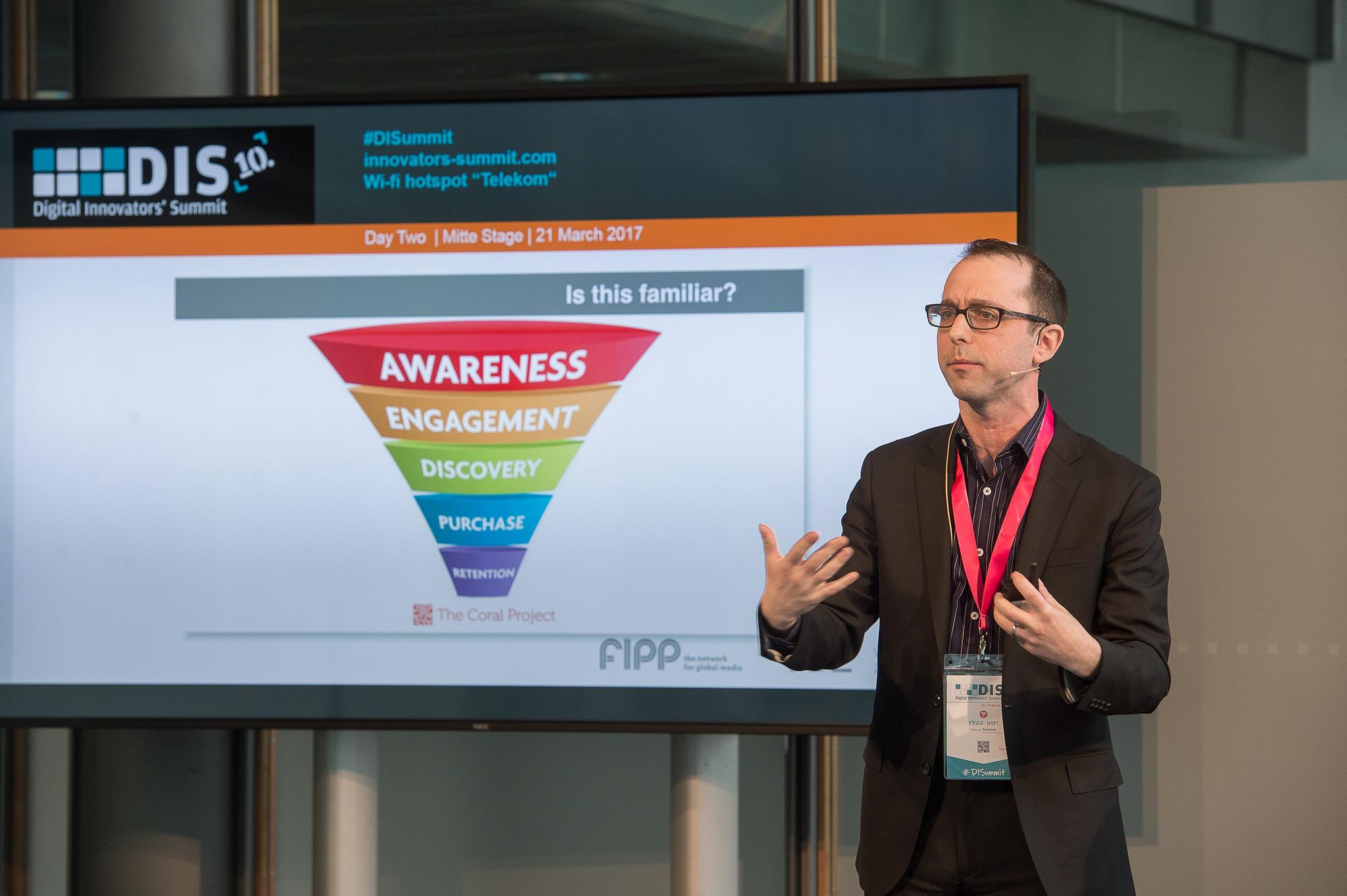 In an inspiring and energetic talk, Andrew, who leads The Coral Project, showed how media companies “can get their community back from Facebook” by better make the most of their comment sections in particular, through the use of some of The Coral Project’s tools.

“There’s no problem with Facebook per se,” Andrew began. However, some of the biggest problems faced by the media do relate to Facebook. The challenges are:

● Trust in the media is falling (especially in the US)

● Diversity in the media needs a lot of improvement.

Therefore, Andrew said, change needs to come in the form of increasing trust, more diverse voices, new revenue opportunities, productive dialogue, and meaningful relationships with readers. “Right now, Facebook owns these relationships,” he added. It controls the data, it controls the tools, it controls Instant Articles (which flatten all articles into conformity and uniformity), and forces user identity (which stops some users from commenting or sharing).

The perceived challenge to media companies, according to Andrew, is that Facebook has all the money, all the power, all the users, all the resources. “Publishers say to us: the challenge is that they have so much and we have so little,” he said.

But the real problem lies in the fact that media are not looking at strategic methods for engagement; they are missing what Andrew calls “an engagement funnel”. “We need to improve the dialogue, become a source, correct mistakes, supply ideas,” he added.

Andrew highlighted that at its heart, journalism is a community project: a funnel between the people and the powerful. No wonder trust is low, he said: journalism is now dictated to, effectively controlled by Facebook algorithms and the like. This has contributed to a huge disconnection between commenters, readers, journalists. “We need to think about how we engage superfans,” Andrew said. “Serial commenters, loyal subscribers, people who write letters to the editor: they want to be recognised and valued beyond just the data and cookies they provide.”

The path to change

But one way publishers can show their worth is through data. Since people don’t trust Facebook with their data, Andrew reasoned, media companies and journalists should showcase their trustworthiness – by offering:

● Direct access to journalists in the newsroom: not a direct telephone line of course, but controlling that access and creating a personal link to certain writers

● The ability to bring people into the journalistic process and manage interactions on your terms: articles on certain topics can have different kinds of interactions, eg. more restricted/heavily moderated comments, or choosing to show only the top-rated comments, or opening conversation with journalists for just a few hours on a particularly contentious article.

● To be transparent about data: people are giving over their private information, but this has to be respected. Try using anonymous aggregated data, or asking for personal stories to inform your journalism, or asking for data and then giving people the option of breaking the link and going back to being anonymous.

“You can control all this,” Andrew emphasised. “And Facebook cannot interfere.”

There are already some widespread areas for improvement which Andrew identified. “We’ve spoken to 150 newsrooms, and most of them don’t have data on commenters,” he said. “So the Financial Times took our advice, took data on their commenters, and found that commenters are seven times more engaged, and comment-readers six times more engaged.”

In addition, subscribers are more likely to read comments, and readers in general become more engaged and more likely to subscribe the more that they visit a website. “But the website must take an active approach to retaining readers and commenters – it doesn’t happen by itself,” added Andrew.

Tools and ideas to make these changes stick

Andrew’s final point listed the ways in which The Coral Project can help. Media companies can take advantage of its free software and guides: the “Ask” software, which enables users to create a survey, build visualisation and share responses; the “Talk” software, which allows users to create a comment stream and determine their own algorithm without needing to know coding, then collate comments by preferred metric – for example “only high quality commenters”, which makes human moderation a lot easier. Organisations such as The Guardian, The Washington Post, The Financial Times, The Wall Street Journal, and The Atlantic are already using Coral software. Finally, in the non-software category, are “Guides” on the best practices for your newsroom to use.

The Coral Project team also conduct both academic and non-academic research, and they have found, among other things, that what communities of readers really need is clarity, value, safety, recognition. “One of the common mistakes made is not following up when you’ve asked readers to contribute comments, photos, own experiences etc.,” Andrew pointed out. “All it takes is a thank you sometimes, yet so few companies do this.”

To summarise, Andrew repeated that there is a big difference between Facebook and publishers in terms of desired outcome: “Your goal is to keep people engaged in your journalism. Facebook’s is just to keep users on Facebook.”

He recommended that media companies go back to the drawing board and ask again: what is our mission? What is the role of the community in our mission? What does success look like for community involvement in every article/series? What’s our engagement funnel? And how are we tracking whether or not that success is happening?

Finally, he invited journalists to join in The Coral Project’s open Slack channel, which has community experts on the team, and to take advantage of the Project’s open-source research and tools. “This is for you! Join us,” he emphasised.

Reuters Institute: “Mobile alerts and the battle for the lockscreen”

After Andrew’s presentation, Rasmus Nielsen, Director of Research at the Reuters Institute of Journalism, looked at audience engagement from another angle. 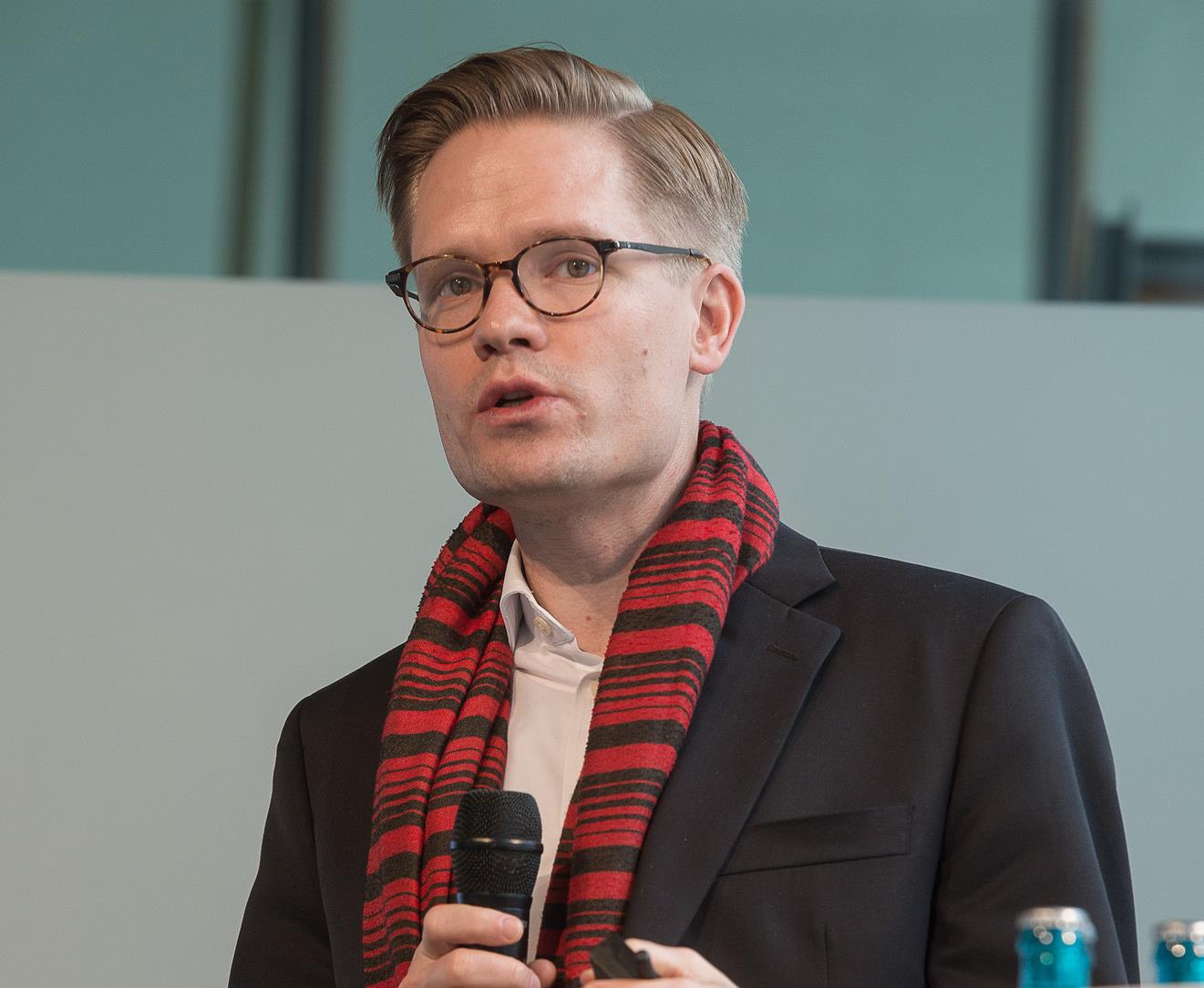 Presenting a piece of research conducted by the Institute, he described how they looked specifically at the issue of how journalists can use mobile alerts across four mature markets: the US, the UK (where 85 per cent of people use smartphone), Germany, and Taiwan (where 98 per cent use smartphone – a highly mobile-first environment).

How do people get their news?

Beginning with this question, Rasmus explained that increasingly, people come to content sideways: through social media and search functions, for instance. Newsletters have had a well-documented resurgence, and even aggregators and now mobile alerts are making a dent.

Mobile alerts are growing a lot, but still, he said, most smartphone users don’t currently get news alerts. That doesn’t mean they couldn’t be persuaded, however – and this is what their research looked at. “Our research suggests that legacy media companies are still doing best when it comes to alerts,” said Rasmus. “But there is huge potential across the board.”

The majority of alerts are not for news – most people use them for messages, emails, calendar reminders, social media activity, and other similar functions. A majority in all four countries does not get news alerts. “Mobile is such a personal experience, people are very careful with whom they allow the privilege of sending them alerts – and people are cautious about allowing too many notifications,” Rasmus warned.

“Most people we surveyed accept that alerts are useful, but 23% of them have uninstalled an app that has bugged them in the past year because of the notifications that come with it.” And uninstalling means the opportunity to reach them is lost altogether.

Rasmus presented some other interesting findings, such as the fact that news alert users tend to be male. Four in 10 Taiwanese users get news notifications, which was the highest percentage, with worries about safety and security, wanting to keep informed, and being the first to know about important news as driving factors. “It’s important to note that with alerts, you’re not optimising for shareability,” Rasmus said. “It’s not that kind of channel.”

The main reasons for not using news alerts include feeling overloaded already, not wanting extra notifications despite being interested in news, and wanting to keep alerts for personal and social purposes. In sum:

● 21 per cent want to control the general inflow of alerts themselves.

“Control and personalisation is a key issue for potential alert-users,” said Rasmus. Good examples, he said include The Guardian’s alerts during the 2016 Rio Olympics, chatbots via Facebook Messenger, and more recently, rich media payloads in iOS 10. “A future frontier is video notifications straight to the lockscreen,” added Rasmus.

To conclude his presentation, Rasmus summarised that according to their research, the Reuters Journalism Institute predicts that Android and Apple notification platforms will be every bit as important for the news industry as Facebook Instant Articles, Google AMP, and Snapchat Discover are today. “There’s an unmet need for more relevant articles on issues of personal interest,” he advised. “Publishers need to use alerts to build loyalty and revenue – but remember to serve the audience well and not annoy them.”