Due to the fact that social media services such as Facebook, Twitter, Instagram and Snapchat are inaccessible in China, there exists a whole ecosystem of social networking and messaging platforms that are immensely popular in and around China but hardly known anywhere else in the world.

Platforms such as QQ, Qzone and WeChat in particular have hundreds of millions of users and, just as Facebook, Instagram and WhatsApp, they’re all owned by the same company. Their parent company Tencent first became China’s largest tech company in terms of market capitalisation in 2016, and is currently going back and forth with ecommerce behemoth Alibaba in the race for this title.

Join worldwide media leaders and colleagues at the FIPP Asia conference, taking place on 14 and 15 September in Wuhan, China. Take a look at the first confirmed speakers here. Book now to save: fippasia.com

As our chart illustrates, there’s no need for Tencent to shy away from comparisons with the world’s largest social networking company. While WeChat has just passed the billion-user mark and is trailing the world’s largest social network by more than a billion users, the company’s financial results are nearly on par with Facebook’s. Tencent reported revenue of US$11.7 billion and a net profit of $3.8 billion for the first quarter of 2018, compared to Facebook’s $12.0 and $5.0 billion, respectively. From an investing standpoint, Tencent has outperformed its American counterpart in the past 12 months: the company’s stock price climbed 60 per cent since May 2017, Facebook’s is up by “just” 23 per cent. 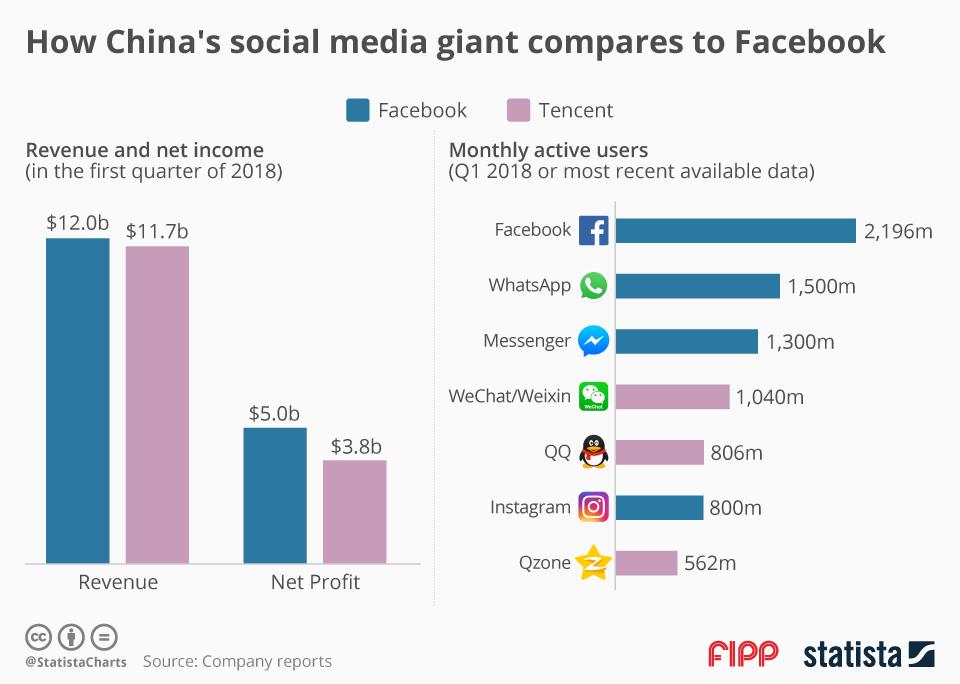 Chart of the week: The EU’s most trusted news sources

Chart of the week: Paywalls and the acceptance of paying for news