The article was pretty brutal in its evaluation of one particular vendor, Hearken (a reader engagement platform for publishers), which I found disturbing, particularly when I learned the author never actually tried to reach out to Hearken to discuss the article prior to publishing it.

It was also unsettling to see that the author’s premise (masquerading as innocent questions) looked like the perfect opportunity to hype his PhD thesis on “how audiences engage with the news, and how journalists engage with their audiences.” IMHO, it almost looked like branded content posing as editorial.

I don’t have any connection to Hearken or the other companies named in the story, but I applaud any efforts to help the industry engage with readers. Engagement wasn’t a priority for many in the business until recently – a situation which led to the growing mistrust between publishers and consumers.

How did we get here?

It wasn’t all that long ago that 86 per cent of US news reporters believed citizens should not be allowed to contribute to the news. Perhaps they were pining for the good old days of print when audience engagement was limited to readers sending letters to the editor with only a handful of missives published with responses.

With the internet’s virtually free many-to-many communication capabilities, people have an endless capacity to rant, rave, and question what’s published – a power that many have wielded like a sword and resulted in 80 per cent of reporters admitting that they ‘rarely’ or ‘never’ responded to reader comments.

Instead of welcoming audiences’ heightened engagement and finding creative ways to connect with readers, while tempering the trolls, a number of publishers chose to slam the door on dialog and send readers off to social media to talk amongst themselves.

Thankfully, some of today’s most successful publishers don’t fall into that “I write, you read. I don’t care what you think” crowd.

The Economist, The Washington Post, The New York Times, Newsweek, Wall Street Journal, Daily Mail, Reader’s Digest, Game Informer, Bon Appétit, and even AARP The Magazine all open up their sites for users to engage with those who write, edit and read. Financial Times discovered that people who comment are seven times more engaged that those who don’t.

Today, things are looking somewhat brighter as more journalists start to view people’s comments in a more favourable light – saying that feedback helps them understand what their readers are thinking, which helps improve their follow-up coverage.  Others believe that engaging with readers is needed to drive traffic to their sites and that responding to comments is necessary for their news organisations’ survival.

So what is engagement?

According to a February 2018 study by the Tow Center for Digital Journalism, “Audience engagement is a set of audience-focused tasks that include identifying and interacting with people who use your site, as well as prospective audiences.”

As much as I respect the source of that definition, it seems to be missing something important. Certainly engagement requires action and a set of audience-focused tasks, but it must also be experiential. It requires an emotional connection, a commitment, and attentiveness to those with whom one wishes to engage. In other words, engagement is a two-way street.

Not everything is driven by quantitative data and charts which provide just a snapshot of an audience’s behaviour at a specific point in time. It’s based on that groups’ experience with the brand, up until that point. Looking at hard data is not enough to evaluate the total impacts of engagement; one must marry quantitative data with qualitative – employing judicious gut feelings in the final analysis.

But if one still insists on purely empirical data, they can check out Forbes Insights’ 2017 report New Rules of Customer Engagement which compares the bottom lines of companies highly engaged with their customers versus those that are not.  The results speak for themselves. 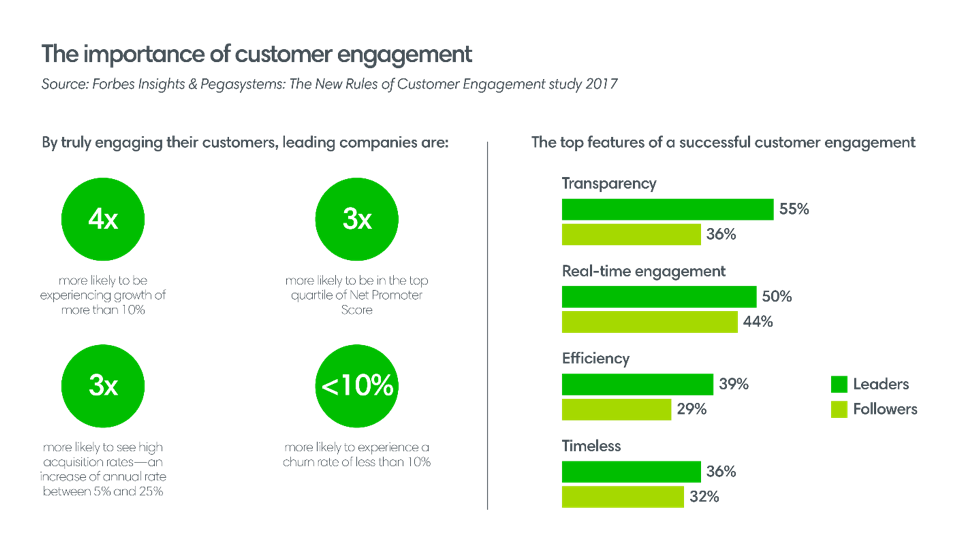 In the case of media, engagement happens when content creators (journalists, reporters, editors, columnists) and consumers (readers, viewers, listeners) come together (virtually or physically) to give attention to a story/editorial/opinion. Either or both may take part in its creation or criticism – a state which may have them experiencing a meeting of the minds or entering into a constructive conflict.

The other day I was reading Cision’s 2018 global state of the media report, based on a survey of 1,355 journalists across six countries. When I saw that 34 per cent of journalists believe that updates to social media algorithms would have the biggest impact on their work, I was more than a little surprised. 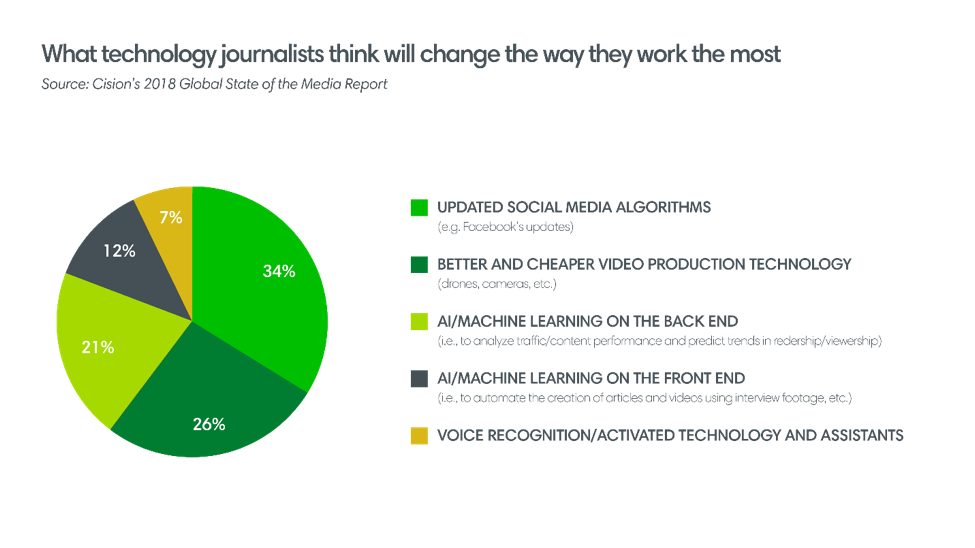 Given how many of them mostly use social media as a megaphone to blast content out to the masses, I assumed they saw no value in those who follow them. They certainly don’t appear to capitalise on its potential to create loyal and trusted relationships with people and engage with them. It’s rare for me to see journalists respond to posts and tweets from readers, but thank goodness a rare breed does exist.

Margaret Sullivan of The Washington Post (>83K followers) regularly engages with others on Twitter, as does Daniel Dale of Toronto Star (>360K followers). Both have huge audiences, but they still take the time to read and respond to questions and comments.

Mark Di Stefano, media and political reporter at BuzzFeed UK, is also very active on social media, interacting with many of his Twitter followers on hot topics like gender pay gaps. With 94K followers, he obviously can’t respond to everyone, but he certainly stays involved in the dialog happening around his work.

Terri Peters from Today is one of the most engaging reporters on Facebook. A quick look at her newsfeed justifies her ranking; she is in constant conversation with her followers. She also regularly uses crowdsourcing techniques to gather content for Parenting Today stories.  A brilliant win-win-win for herself, her publication, and her fans.

In other forms of media, Netflix and Spotify take user engagement to very person level – creatively responding to users’ posts and/or comments with empathy and humour. 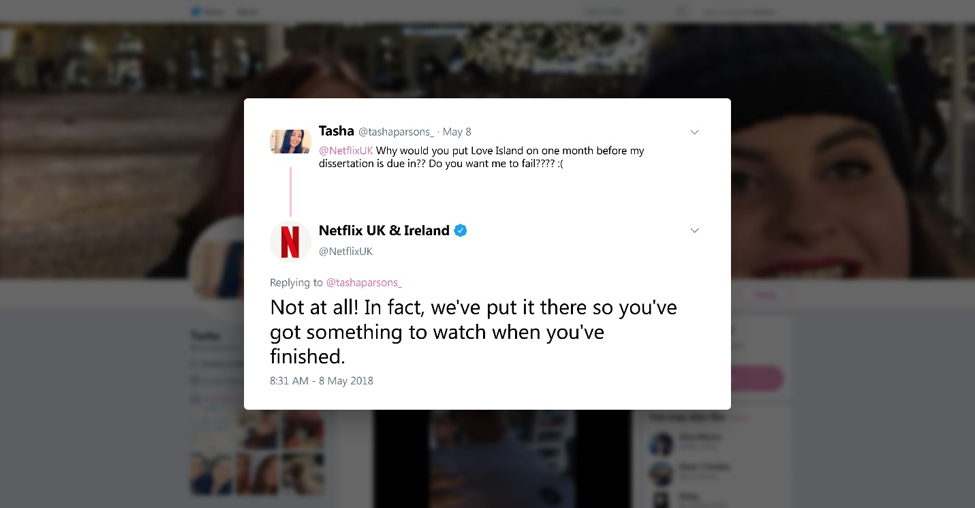 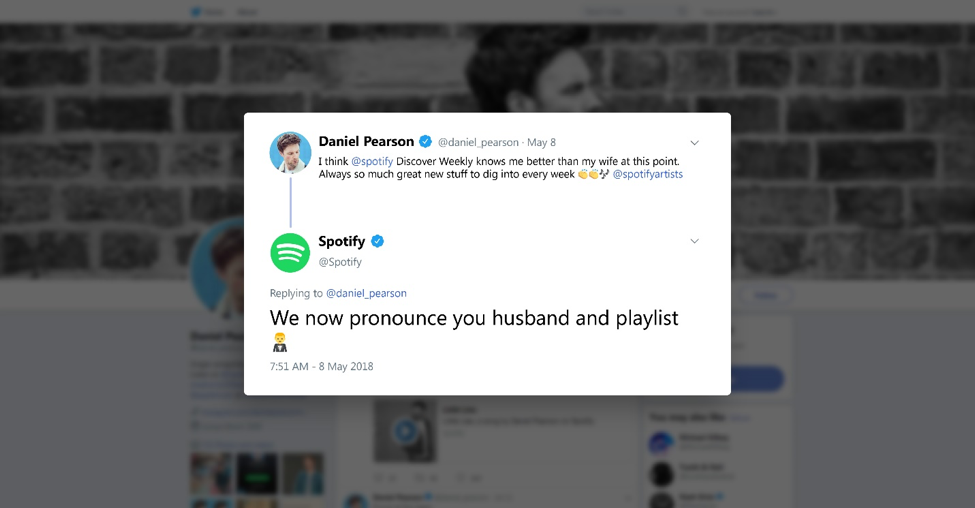 Engagement is all about experience – make it a good one!

At the Digiday Publishing Summit earlier this year, 58 per cent of members (many of whom are publishing executives) said that there is a user experience crisis in digital media. No kidding! There’s been a crisis in user experience since the web began 30 years ago. Just take a look at the bounce rates of some of your favourite media sites. 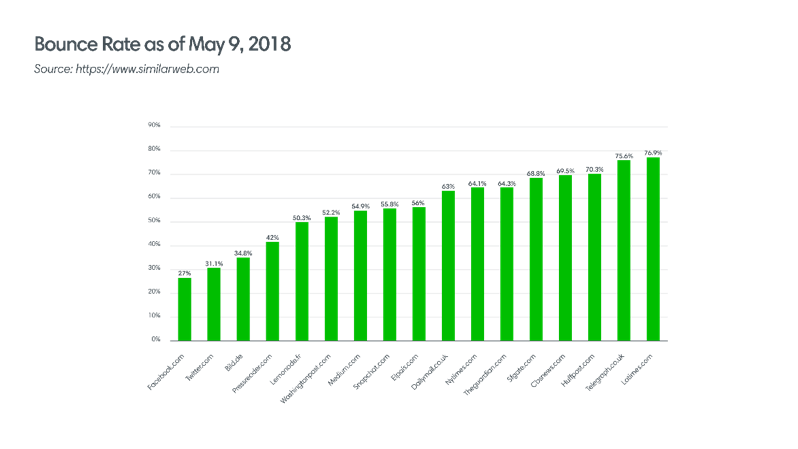 Slow performing, power-debilitating, ad-infested, and badly designed websites are anything but engaging, but instead of fixing these problems too many publishers just block people who use ad blockers. Not exactly the best strategy given that ad blocking, that comes standard in modern browsers, will be activated by over 30 per cent of US internet users this year. It may be the easy road out, but it’s not a road to riches. To be brutally honest, it’s more like a race to the bottom.

It’s possible that boomers and Xers didn’t care as much about their online experience or engagement, but millennials and Gen Zs most certainly do. According to a 2017 Google study, today’s generations expect three things from brands (including media brands).

Did you know that 53% of mobile visits are abandoned if it takes longer than three seconds to load? And for good reason.  According to Google, the average mobile load time globally is 22 seconds. Is that opportunity knocking I hear? 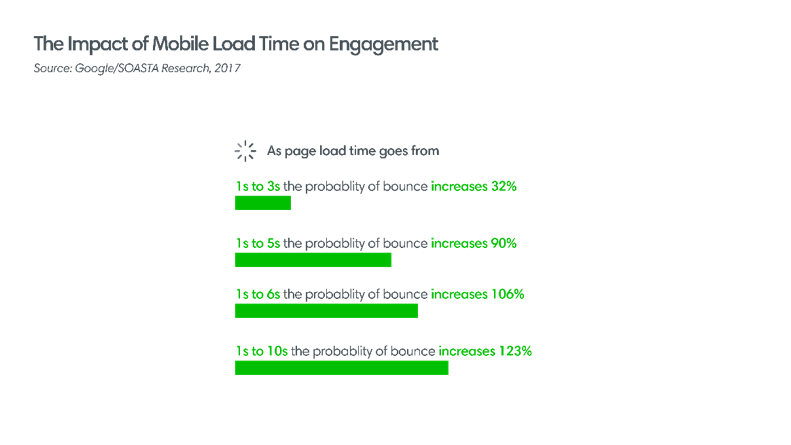 We’re not traffic, we’re human beings with personalities, feelings, expectations, and money to spend. So when it comes to attracting and retaining my attention, make it simple, consistent, trustworthy, and relevant (for me).

It’s not enough to satisfy me with quality content; that’s just the price of admission. Online, on mobile, in apps, or in person, deliver me an engaging experience so I’ll stay longer and come back for more.  Hey, I might even PAY for it if the experience is worth giving you my attention.

Engagement starts at the top

In 2016, PhD student, Merel Borger, published a paper on participatory journalism that made quite an impression on the industry and its walled garden ideology. 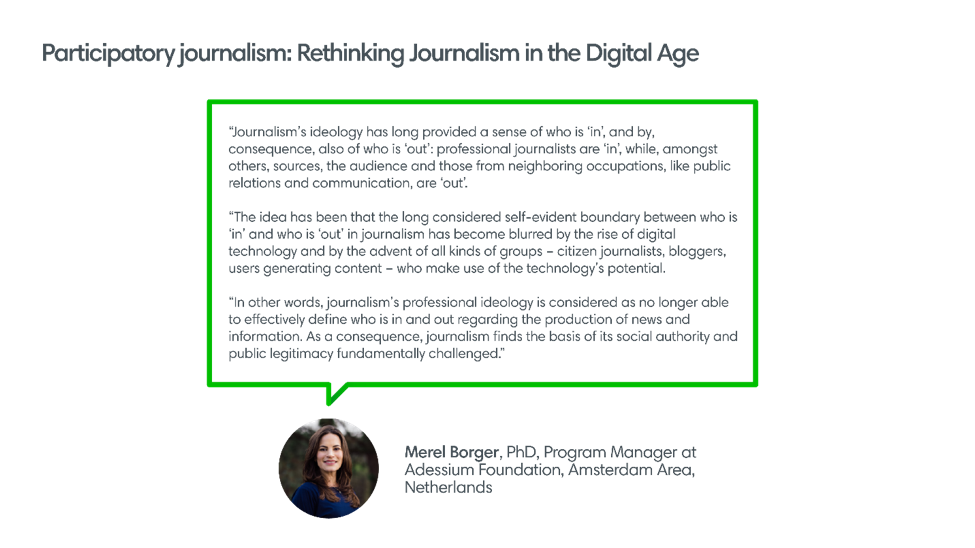 The challenge she wrote about couldn’t be fixed by throwing money at it. It is deep-rooted in 300 years of traditionalism – an important issue addressed the 2018 Guide to Audience Revenue and Engagement report.

“Becoming an audience-driven—and especially member-driven—newsrooms require a huge culture change for reporters and editors that demands significant leadership. The two-way engagement between publication and audience required to sustain a successful membership strategy can initially feel uncomfortable for those who expect a clear boundary between newsroom staff and audience members. But culture change is possible.”

Given the top-down nature of cultural transformation required in legacy media organisations, one can’t expect major changes to happen overnight. But we are seeing the more progressive publishers break down the “who is in versus who is out” ceilings and walls – moves that are helping to reduce subscriber churn and restore trust between creators and consumers.

Despite what some might think, engaged consumers are worth their weight in gold. Studies show that they buy 90 per cent more often, spend 300 per cent more than others every year, and are far more willing to advocate on behalf of a brand that engages them. 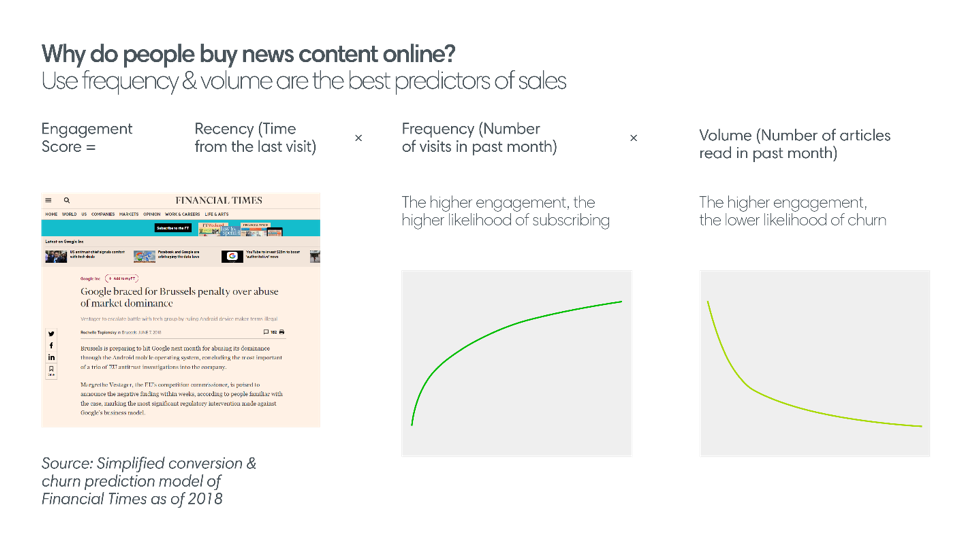 According to an INMA’s 2018 Media Subscriptions Blueprint – a report based on presentations by 25 media companies on how they have recreated their value propositions around content, community, cause, and convenience – subscriber retention, which directly impacts the bottom lines of publishers, can be improved through smarter engagement strategies.

Of course, you could wait for more academic studies on engagement to prove to you that your gut instincts were right all along, but I would strongly urge against that approach.

Instead take a lesson from Jeff Bezos, a CEO with a relentless focus on customer experience, and treat your readers as “invited guests to a party where you are the hosts. Make every important aspect of the reader experience a little bit better every day!”

Do that and I am sure you will find out very quickly that engagement truly does pay.

When chasing reader revenue, if you churn, you burn

How to make digital replicas work