Virtual reality (VR) featured a lot at the Digital Innovators’ Summit 2016, whether as a topic for talks and discussion, or as an experience trying it out for the first time at the Jaunt stand. On day two of the event, Fellow and deputy director at the Brown Institute for Media, Tanja Aitamurto, introduced the idea of using VR and crowdsourcing to tell great stories in an intimate talk.

She began with the basic premise of crowdsourcing: that when people of different backgrounds start to share common goals and vocabulary, that’s when real media innovation happens. This, she said, is the mission of Brown Institute for Media Innovation. 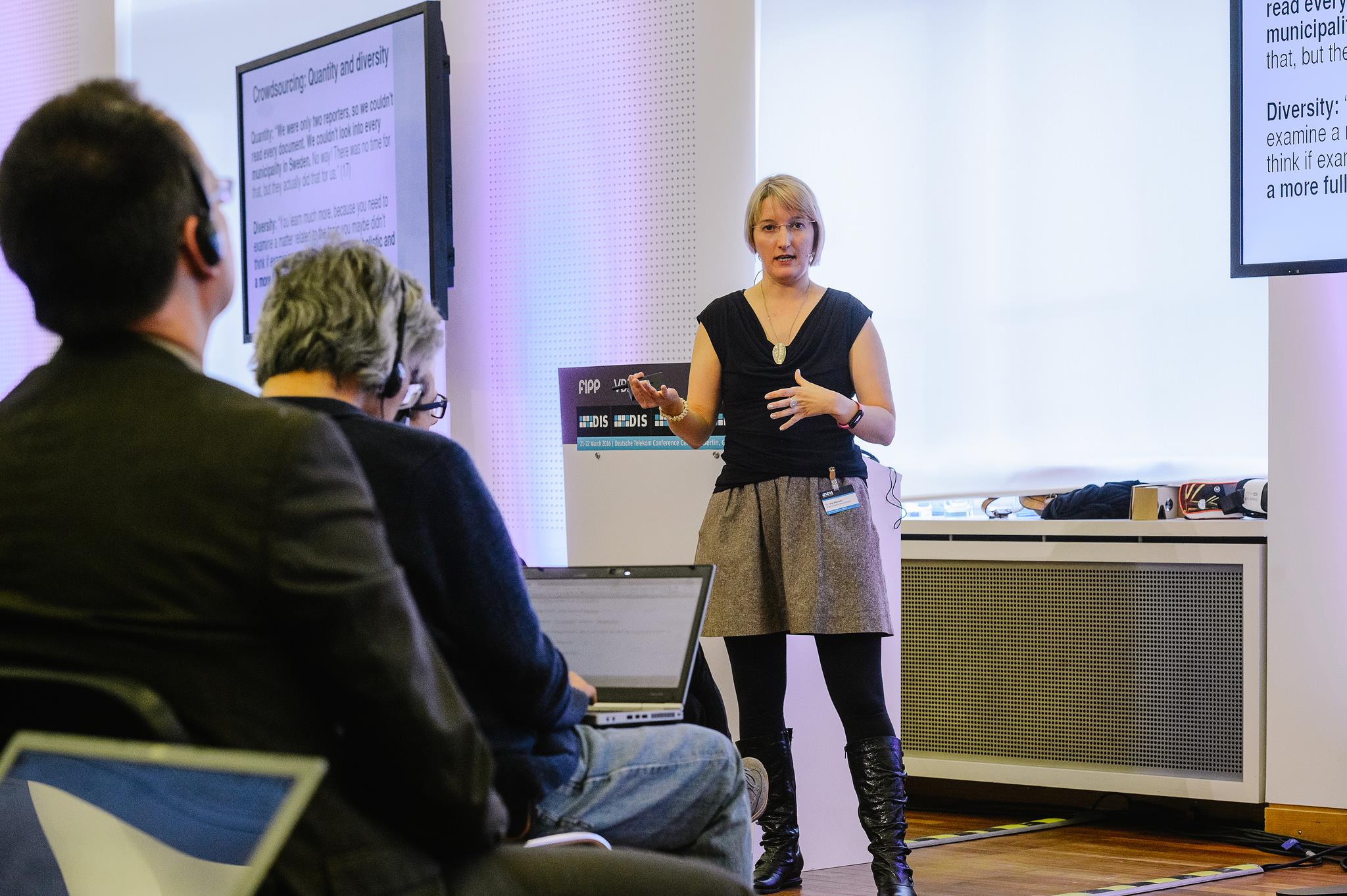 It’s worth noting the specific definition of crowdsourcing. Importantly, the locus of power always stays within the crowdsourcer; they decide how their information will be used. This is very different to online collaboration, known as commons-based peer production, like the way Wikipedia functions. Crowdsourcing – literally, the collecting of information and intelligence from multiple people – is the best way to tap into what Aitamurto calls “collective intelligence”.

She followed this with a couple of examples. A leading newspaper in Sweden, for instance, wanted to investigate the interest rates of banks, so they asked people to use an online map to submit information about the interest rates they’d received. Incredibly, they garnered over 50,000 submissions, and it wasn’t just a good story – in fact, many people who’d submitted used the information from their peers as a comparison tool to go back to their banks and ask for a better loan/interest rate. This shows how crowdsourced tips can be used to expose the ethical inconsistencies of banks and big businesses to ensure a better service.

As Aitamurto emphasised, crowdsourcing enables journalists to take advantage of citizens’ knowledge of their neighbourhoods, enabling quicker searches for information. Crowdsourcing in journalism, she said, is when we tap into people’s collective intelligence. And the results of this process can be better than relying on single isolated experts: there are many advantages to using a heterogeneous crowd rather than a homogeneous expert group for information.

Some more good examples followed. Aitamurto highlighted how huge corporations like Procter & Gamble have used crowdsourcing company InnoCentive for solutions to R&D problems. NASA, too, has used crowdsourcing for years, for instance to map craters on Mars via a website. It’s also been a favoured method by educational websites to source voluntary subtitle translations so they can improve materials. KQED even conducted a price check to monitor customers’ medical insurance in the US, helping to overcome the problem of having no centralised comparison tool. Finally, thanks to information like that gathered about banks’ interest rates, it has been used for financial law reforms in Iceland and Finland.

Aitamurto explained that the process is two-way and collaborative. When journalists use crowdsourcing, readers start to feel closer to the publications they help. The traditional relationship flows one-way from journalism to the reader, but this way, it’s more mutually beneficial. Central to readers’ feeling of belonging is the fact that they are no longer just consumers, but part of the process, and readers have often subscribed to the publication after being involved.

Referencing Michel Foucault’s famous discussion of Jeremy Bentham’s Panopticon prison, where inmates self-police out of a sense that they’re under constant surveillance, Aitamurto expressed her enthusiasm for crowdsourcing as a reversal of this process: With crowdsourcing as a key tenet of investigative journalism is that the public participates in, important topics are brought to public consciousness and pressure is generated and exerted on powerholders – like the banks in Sweden and Finland.

Other motivation factors for people wanting to participate include a genuine desire to help; a belief in the power of journalism to do good; wanting to contribute to a common good and improve society; and wanting to mitigate knowledge and power asymmetries.

Crowdsourcing is not without its challenges, however, as Aitamurto wanted to highlight. Typically, she explained, journalists will use no more than 10 sources in a story – and they’ll fact-check them all. But the challenge of collective intelligence is that there are so many inputs; fact-checking becomes very difficult.

So, she asked, can we justifiably use this data that we cannot verify in our stories? In the case of the Swedish newspaper which crowdsourced information on interest rates, journalists decided to call up a small sample – around 200 out of the 50,000 – to ascertain their validity. Once they had established that they were all genuine, they felt safe to use the data they’d collected.

However, Aitamurto said, it does raise a tricky fundamental question about crowdsourcing. Journalists must be prepared for unexpected situations where they can gather massive amounts of data that they then can’t or don’t use. After all, how do we verify it?

In the second part of her presentation, Aitamurto moved onto 360˚ video, something which had also been discussed by Ben Kreimer of the BuzzFeed Open Lab on day one of DIS.

We typically think of VR as being computer-generated, almost unrealistic; but VR now means something very different. Facebook 360, for example, allows people to upload 360˚ video, and this – combined with ever-more affordable 360˚ cameras and headsets – means more and more user-generated content is appearing. At the Brown Institute, Aitamurto explained, students took camera to Sudan to cover the famine; the resulting video has been viewed over two million times. Another video about art in the Iranian diaspora, “Reframe Iran”, has had huge engagement too.

Innovations and challenges of 360˚ video

Consuming 360˚ is getting easier and cheaper all the time, increasing access and interest in the medium. Google Cardboard costs just $3; the “sitting web” (desktop) is growing; but as with the rest of the internet, mobile is growing fastest, with social platforms like Facebook and YouTube making way for 360˚. All these different platforms make for a difficult task for publishers – there’s no standard uniform way of viewing 360˚ yet, so it’s a challenge creating this kind of content.

Users have short attention span, too, as Aitamurto warned. 360˚ should be used only when journalists are certain that people will actually use it and get something from it that they wouldn’t from a regular video. Nonetheless, adding interactive layers can work well to make the video worthwhile, for example integrating annotations, or “hotspots” with contain extra information when clicked on.

In her final remarks, Aitamurto expressed a desire to alter and disrupt the linear storytelling format which seems to dominate 360˚ video at the moment. At the Brown Institute, she stressed, we want to experiment with telling stories “in a 360 way” – for example allowing users to navigate from different exit points in the video, and combining video with computer-generated VR. All in all, 360˚ is in an experimental phase at the moment, but it’s going to be crucial to storytelling in the future.