Google, under its holding company Alphabet, is by some distance the largest media owner in the world, attracting US$79.4bn in ad revenue in 2016, three times more than the second‐largest – Facebook – which attracted US$26.9bn.

The largest traditional media owner is Comcast, which takes third place in Zenith’s ranking, with US$12.9bn in ad revenue.

As we stated in our quarterly Advertising Expenditure Forecasts, internet advertising has overtaken television to become the world’s largest advertising medium this year. Accordingly, digital platforms that are funded by internet advertising dominate our top 30 ranking. As well as Alphabet and Facebook, there are five more pure‐internet media owners in the top 30: Baidu, Microsoft, Yahoo, Verizon and Twitter. Between them, the seven digital platforms generated US$132.8bn in internet ad revenue in 2016 – that’s 73 per cent of all internet adspend, and 24 per cent of global adspend across all media.

Verizon became a media owner in 2015 when it bought AOL, and if all goes to plan will become a much larger one when it acquires Yahoo later this year. Verizon takes 21st place in the current ranking; adding Yahoo to AOL would boost it to sixth.

The fastest‐growing media owner in the list is Twitter, which increased its ad revenues by 734 per cent between 2012 and 2016. Tencent is second, having grown by 697 per cent over this period, and Facebook is third, with 528 per cent growth. Two other media owners have more than doubled in size between 2012 and 2016: Baidu, which grew 190 per cent, and Sinclair Broadcast Group, which grew 171 per cent.

Most of the media owners in the ranking – 20 out of 30 – are based in the US. The US dominates for several reasons: the US has the biggest ad market, US companies have invested the most in extending their reach abroad, and Silicon Valley innovation has powered the growth of internet advertising. China and Germany each have three media owners in the ranking (Baidu, Tencent and CCTV for China, and Bertelsmann, ProSiebenSat.1 and Axel Springer for Germany). Then there are four countries with one media owners each: France (JCDecaux), Brazil (Grupo Globo), Italy (Mediaset) and the UK (ITV).

Related: US, China and Japan to drive recovery in luxury adspend

“The scale of the biggest platforms highlights the importance of building strong partnerships between agencies and media owners,” said Vittorio Bonori, Zenith’s global brand president. “Brands need to deal with these platforms to communicate with consumers effectively and efficiently, and agencies need to ensure they do so on the best terms available.”

“Zenith’s new ranking demonstrates just how much the internet advertising platforms are setting the pace for global adspend growth,” said Jonathan Barnard, head of forecasting at Zenith. “Google and Facebook alone have accounted for almost two thirds of global adspend growth since 2012.” 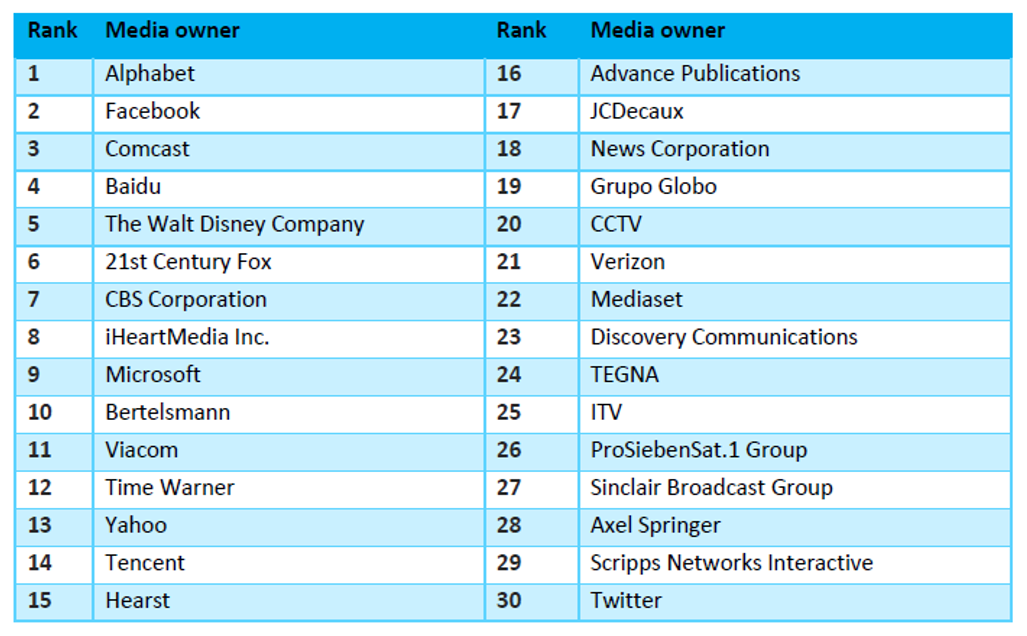 ***Get stories like these delivered to your inbox every week. Subscribe to our (free) FIPP World newsletter.***