How brands are under-investing in traditional media... and why

A recent study to test the effectiveness of various media strands in brand building highlights a major discrepancy between what the advertising industry think and what empirical evidence suggests.

Re-evaluating media: What the evidence reveals about the true worth of media for brand advertisers is a study conducted by auditing and analytics firm Ebiquity, a provider of independent marketing analytics to brands worldwide. It found that the advertising industry is wrongly perceiving digital media as being more effective at brand building than traditional media.

Researchers, who described their study as “independent, impartial and robust”, say there is strong evidence that digital advertising, especially online display, is not performing as well as other media in delivering the qualities required for a long-term brand-building campaign. “This is at odds with the scale of investment in online advertising. Advertisers should re-evaluate the media mix to ensure they are using the most effective combination of media for their brand.” They have now called for a complete re-evaluation of the value of media for brand-building in order to take better decisions to optimise advertising budgets.

The objective of the study was to make an impartial and robust re-evaluation of online and offline media and to try and understand current perceptions of media and to identify the true strengths of different media in building a brand.

To compile the report, researchers spoke to 116 marketers and advertising agency leaders. Together they identified 12 key attributes that would influence decision-making for media campaigns. Marketers and agencies were then asked to score each media strand based on the 12 attributes. These results were compared to 75 industry studies from the recent past to assess how different media performed against advertisers’ perceptions.

The 12 attributes, which constituted the “the most important attributes of an advertising medium”, were measured and compared individually but also weighted relative to an importance index (in brackets) to reach one overall score. They were:

While the overall performance ranking - combining all 12 attributes - placed television on top of the list of both measured evidence and the perception outcomes of the primary research interviews, the rest of the list represents a great conflict of fact and perception. Online video, which could only reach the ninth spot on the evidence lead ranking, was placed second by advertisers’ perception, followed by social media (seven on evidence list), out-of-home advertising (five on evidence list) and cinema (eight on evidence list). 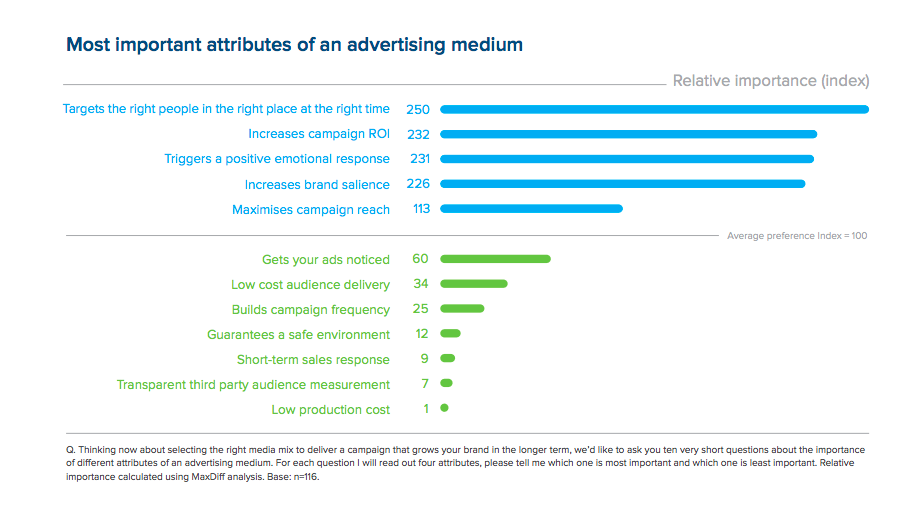 It is clear from the report that radio as medium received a particul "undervalued", ranking in the opinion of agencies and marketers. While the evidence shows that radio should be second on their list for brand-building, it was placed sixth overall by advertising industry representatives. A similar trend was noticed with newspapers and magazines (third and fourth on the evidence list respectively), which only made it to number seven and ten on the advertisers’ perception list.

Radiocentre, the trade body for commercial radio, who commissioned the study, says the objectives for the study was first of all to identify the most important attributes for a brand-building campaign and secondly to evaluate how each medium performs against these attributes.

Commenting on the results of the study, Mark Barber, planning director at Radiocentre, said it was clear that “personal bias is impacting on advertisers’ perceptions…” The report, he said, “compared individual media across a range of criteria" and brought all the data together in one place. “... we hope that radio will rightfully be considered more often for brand-building campaigns".

Another key finding of the report, is that advertisers radically over-rated the value and performance of online video and social media, an assumption that cannot be supported by the study’s findings.

“Success in short term sales response” showed some similarities, with at least television and radio topping the list. Advertisers, however, rated online display and paid social media as joint second along with radio for effective short term sales, while evidence suggest direct mail and newspapers are more effective.

Ebiquity says their findings hold important implications for advertisers and how they advise brands. Firstly, they need to re-evaluate the media mix they suggest and realise that TV and radio stand out as “ticking all the boxes” for a brand-building campaign. Radio appears mostly undervalued by advertisers and agencies. Used creatively, radio is a cost-effective way of extending reach, building brand salience and optimising return on Investment.

As far as targeting the right audience is concerned advertisers “quite rightly see digital media excelling for their highly sophisticated targeting potential” but Ebiquity warns that they need to achieve a better balance “because conventional targeting is still effective”.

The research has also highlighted some concerns about programmatic targeting. “We’ve been calling for greater accountability and transparency in programmatic trading for some time. Our advice to clients is to be in control of how they allocate, audit, and manage programmatic spend, vendors, data, and technology.”

Researchers also had an important message for traditional media - notably radio. “Have a robust body of research evidence to prove the medium works. There is little such research for online media and this is something Ebiquity think the online industry should invest in. It will be in everyone’s interest to get a true perspective on the effectiveness of online advertising and build understanding of how to get the very best from the platform.”