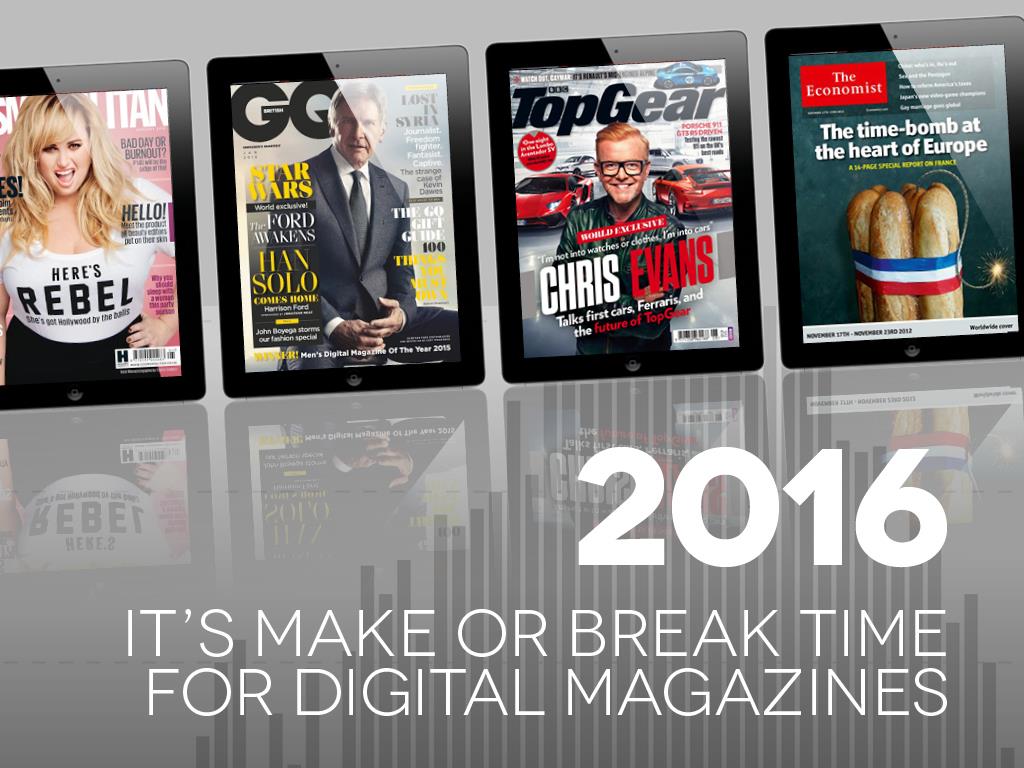 In digital edition terms – it really is a numbers game – yes, engagement and dwell time is a key factor in showing if a reader is enjoying a product – but publishers mainly want two things: subscription growth, and digital ad revenue growth. For this to happen, advertisers need more substantial numbers, and subscribers need to see the value in taking up digital, and this is the challenge. From my point of view – it has to come down to two main elements: effective marketing and – most importantly – is the product actually any good and worth the extra cost? Here are some further thoughts to take into the New Year and beyond…

Effective marketing within a publisher needs an experienced team who are willing to take a risk, try new methods, capitalise on social media and know where to find the eyeballs – and also take full control of the creative over a prolonged period of activity. I’ve seen it so many times where the marketing banners are left to the junior designer or intern to create – without a proper brief, and all last minute. These things should be crafted, and meticulously planned, and put into action by the right people.

‘If you build it, they will come’, is quite true in many cases – but you need to tell them about it too. There are so many fantastic digital editions that haven’t been marketed enough – and these will quite possibly fall by the wayside if they aren’t promoted enough in the right places. The Economist newspaper have been so focussed on this – and the result is their huge increase in downloads year-on-year. Whichever channel you visit The Economist on, there it is, loud and proud, a consistent, clear and precise subs marketing message, and for great value – and targeted to the right people. They are relentless, and its proved a great success – and the product is bloody good! I’m hoping more magazine publishers will follow their lead over the next 6 months. It can be done.

We’ve finally seen the end of Apple Newsstand, so magazine apps can now sit on device screens instead of hidden in a folder – a positive – if your users actually work this out. Its a privilege to be on someone’s home screen – and it means your app is probably being used! It also means your magazine app is now swimming with the big fish in the App Store – which goes back to my marketing point above. If it was hard to find a digital magazine when Newsstand was around, it’s infinitely harder now. And there has been no real improvement within the stale Google Play Newsstand, and quite frankly – the other platforms are non-existent in digital magazine marketing terms – namely Amazon Kindle, Windows Store, and the barely-noticed Samsung Papergarden.

So if the places you normally sell your product aren’t as effective as they should be – how can readers find your app, or learn about the monthly editions, and how do you counter the lack of platform activity? Its a domino situation brewing: if the major platforms don’t support, the readers won’t come, and the advertisers grow restless, the publisher invests less time, resources are cut back, and we see titles close or revert to PDF, shock horror.

This year’s UK Audit Bureau of Circulation numbers didn’t provide any encouragement, and its clear that readers are still not migrating over to the vast majority of mobile editions. We saw declines in numbers for eight of the top 12 UK digital editions – well-known brands such as Empire, GQ, BBC Good Food, Wired, National Geographic, Cosmo and Men’s Health. Empire’s most recent digital edition circulation fell by 12.5 per cent year on year to just under 11,500 a month compared to 133,210 print issues. Despite the drop for the majority of UK digital titles – we saw a small rise for BBC Top Gear, (who have an excellent digital edition), and most impressively, a monster gain of 225 per cent year on year for The Economist who are achieving  sales of around 71,000 per issue. That’s a little under half the print readership.

How have they done this? The Economist is an excellent weekly product on all tablets, all phones and in of course in print, and they have a super-value subscription offer that includes all channels – ‘£12 for 12 isssues’, which is marketed to the right people at the right time, for the right price. It’s also incredibly easy to use. And they’ve launched the brilliant daily Economist Espresso to help capture even more new readers. There are so many obvious plus points – why aren’t more digital magazine publishers taking this on board?

In December 2015, we saw the first ABC ‘Newsbrands’ report released for 2015. This will include the full picture of brands’ circulations, and online traffic in the same place, and on the same day – print, web, digital publications and editions, and social media data – delivering a complete figure for ‘Newsbrand reach’, as the ABC describe it. Visit here for a taster of what’s to come there. I hope it features magazines, and not just newspaper brands.

If there are magazines included, which would be fantastic, as they are not just about paper. Most magazine brands have far larger communities following them and taking an interest, compared to whoever buys the print edition, and this is the value of social media and a strong online presence. We are now living in a digital world and this should be reflected in the ABC circulation reports. Being able to see the true scale of magazine brands at a glance in 2016 is going to be useful for publishers, advertisers and sponsors alike.

What do the readers want?

Readers want simplicity, and quality. They want good stories, entertainment, access to all editorial content across a range of devices and channels. They want value, and speed of delivery. And they want consistency. You need to be accessible, easy to locate, easy to use and share, and easy to purchase – from a variety of places. Do they want to buy products on the page? There is a definite move towards article-based publishing – but there is still a whole mass of people who like their magazines curated, and placed in an order, and given a pacing they are familiar with. Why can’t a magazine app do a myriad of things? Radio, Video, Social, Chat, Shoppable and Editorial content?

In 2016, we’ll see magazine publishers adding news feeds to their apps, and giving the reader a reason to return on a daily if not twice-daily basis. We’re up against Apple news, Facebook and Instagram, and instead of twelve publishing points throughout the year to market and promote, we’re now potentially looking at hundreds per day. It makes sense to provide more value, and keep them coming back for more.

All about the reader

Knowing your reader is vitally important – so integrating the right analytics and listening to your audience is vital. And providing a bespoke experience in return for loyalty is a must-have feature. Tailor your product for various situations – and make your customer relationship a personal one. Watch for trends within your readers, stay nimble, and act fast when you see a change in habits and market forces.

Your app needs to work well across devices, and be crafted by a team who love what they do. You need innovative people on board, and should be working with a solution that gives you all you need as a publisher: Third-party subscription capabilities, cost-effective, bespoke analytics, easy to train staff on, experienced tech support and full flexibility and compatibility with your internal CMS systems.

There are so many great providers of digital magazine software who have been doing this since the iPad launched and even further back – from Adobe DPS to Pugpig, Contentment, Press Reader, Edition Digital, and more. They don’t come free of course – but all are worth considering for your digital publishing strategy going forward.

Another major challenge for publishers is keeping resources in check at  time when technology changes so fast – how much does it all cost compared to how much you make in sales and ad revenue, is it within your budget for the year, or are you taking a risk and hoping the readers will come across organically? Encourage experienced, autonomous ownership of the product, but have they focussed on the wrong element? Are the print and web teams involved, or do you have a central team that create digital editions to save on cost? This might mean that ownership within brands has to be compromised – which I believe makes for a lesser product.

Be agile in your approach, have a solid plan for three to five years, and make small tweaks and celebrate small successes as you go. Once your strategy has been a success in an initial area – roll it out into other teams when the time is right, and you’ll start to affect a positive culture change within your organisation.

One thing is for certain in 2016, is that the digital marketplace will continue to evolve on a weekly basis, and plans that are put in place one month can be out of date just one month later – so stay sharp, focus on your audience, the product’s continual development, and the marketing that promotes it, and don’t be afraid to take a risk and experiment with new ideas.

2017 could be the year of resurgence for magazines