Rogers Media, a subsidiary of Rogers Communications, had a diverse magazine division, with multiple years of strong year-over-year growth in the size of their audiences and the amount of time spent with their brands, digitally. “When all of that was happening, digital was very much a secondary focus for the business,” explained Steve Maich, senior vice president of publishing at Rogers Communications. “Print products sat at the centre of all of our planning, all of our workloads, but increasingly that wasn’t where our business was growing.”

***Meet Steve at the 41st FIPP World Congress from 9-11 October 2017 in London, which he will attend as one of a line-up of 80+ speakers from around the world. Discounted, early bird registrations are currently available***

“Our feeling was that what we needed to do was to make a really bold, public step in the direction of the business we saw transforming and not dedicate our time, energy and resources to try and shore up print,” he said.

“The strategy was to try and meet the audience on the terms that they’re looking to consume this type of content, to be responsive to consumption changes,” Maich said. “That sounds obvious, but when the desires of your audience are not well-aligned to the fundamentals of your business, it puts you in a really tough spot.”

The demands and expectations of their audience were changing, but the imperatives of the business held them to a model that was increasingly out of step with the way people wanted to read and watch content, he explained.

“What really pushed us over the edge and convinced us that the time was now for us to take some risks – frankly, make a bold change in our business – was the change that we were seeing in the advertising community, where increasingly we saw advertisers – although we could deliver them large, dedicated and loyal audiences in print, simply grew less and less interested in transacting that way.”

At Rogers Communications, Rogers Media’s parent company, the expectation is for growth. “Standing back and saying, ‘yeah the trends are not great but we’re still profitable,’ is kind of beside the point. The question is at companies like ours is, how are you going to grow?”

In order to do it, the company had to be willing to go through dramatic changes and expensive restructuring. As a strategy, Maich said it was risky.

“We spent most of last year with a small taskforce group working directly with me and working confidentially, trying to map out what our future business would look like, and also to lay out a many-months-long cadence of transformation, that involved hundreds of individual tasks, and tactics,” he said.

In September, the brands Maclean’s, Chatelaine, and Today’s Parent were reduced in frequency; Canadian Business, Sportsnet, MoneySense and Flare went out of print and became digital-only, and 34 B2B publications including Marketing Magazine, Canadian Grocer, Medical Post and L’actualitie and Lou Lou went up for sale and were sold in four separate transactions. Transcontinental bought some of the 34 trade titles, as did Brunico, Ensemble, and the CCTFA.L’Actualite was sold to Alexandre Taillefer’s Mishmash Media, and Lou Lou was shut down entirely. Layoffs followed in November: 27 at English-language publications and 60 in Quebec, and 13 at Macleans.

Maich explained they’d tried to do both print and digital for 10 years. “We really tried to do both,” he said. The conclusion they came to, was that it was impossible to drive both sides of the business unless there was a massive investment in capital and people.

The transition to a digitally-focused Rogers Media involved deep introspection. “Given the kinds of declines we’ve seen in our revenue profitability over the last couple of years, you better be prepared to look yourself hard in the mirror and ask what are we truly good at? What do people truly rely on us for? How much of that is translatable to this new mode of consumption that is taking over the world?

“The good news is that we came out of that process saying we can absolutely compete and thrive in the digital world, but we can’t do it while simultaneously trying to shore up a legacy platform that tends to dominate everything. We needed to make a risky, and difficult, and painful step out of our past and into the future. It’s been exhilarating to do, but I would be lying if I didn’t say that it had some dark and lonely days to get here.”

Into 2017, most of the really painful work was behind them, Maich said. “And we could turn our attentions to really building this. You go through the pain and come out the other side and get to engage in a much more rewarding work of building things.” 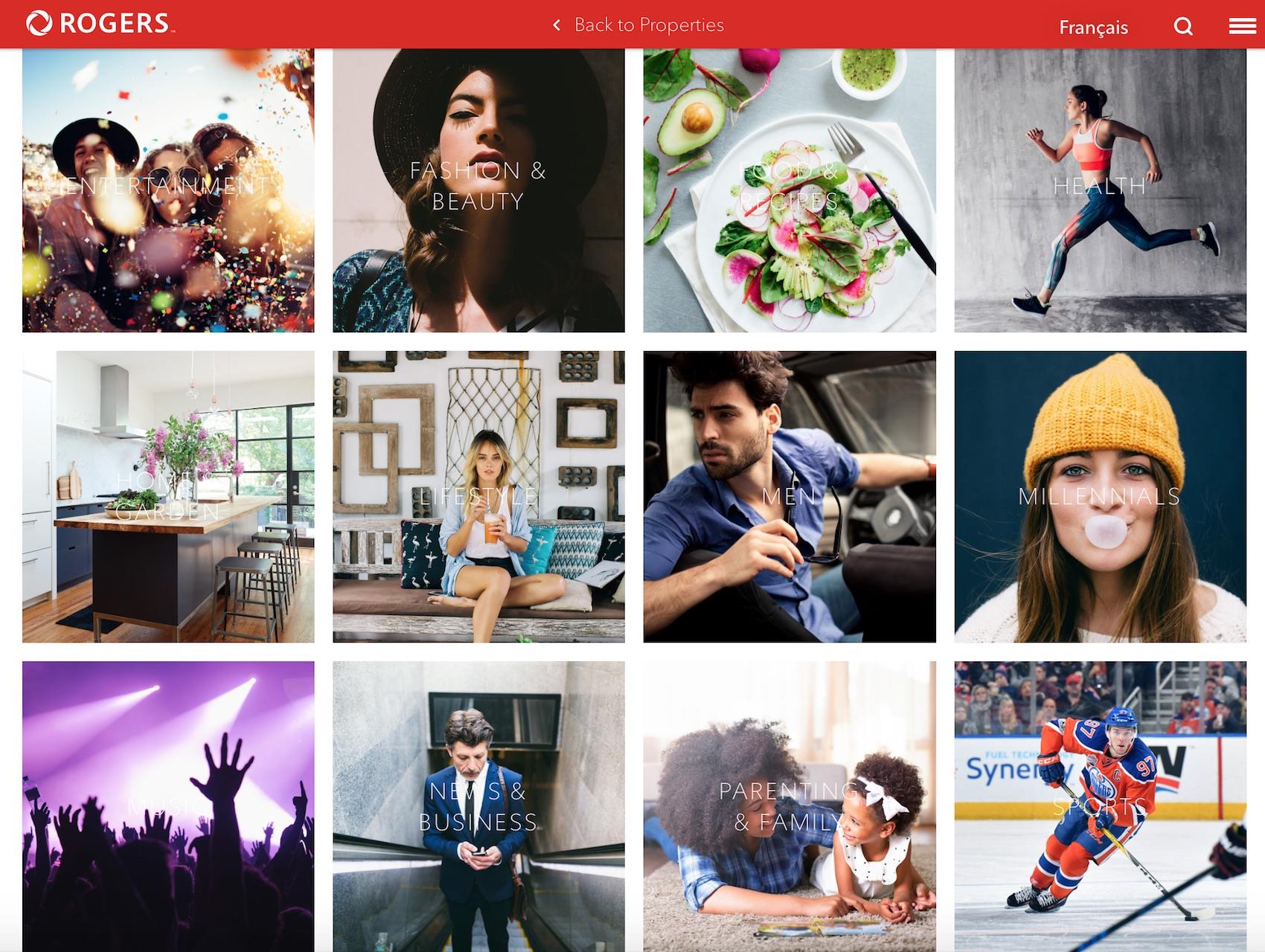 “In order to make sure we’re making the most efficient use of the content we create, and put us in a position where a story written by one of our entertainment writers can find its way on to the website of any of our radio stations as well, as for Flare or Hello!, it meant we had to reorganise the teams and say, ‘you are not brand-focused anymore.’ So if you’re in our entertainment pillar, a lot of the people in our entertainment pillar used to consider themselves employees of Hello! or employees of Flare, for example. Now, they’re part of our entertainment and pop culture team. And Hello! and Flare are two of many brands we support through that content team. That was the thinking behind the reorganisation.”

Rogers Media is also investing in modernising their systems and technology that will allow them to produce content regardless of the platform. “We’re modernising all of our technology and tools that allow us to share content more efficiently and quickly, get rid of the manual cutting and pasting and sharing things via email, and that’s a multi-year project that’s going to unfold between now and 2020,” Maich said. “And, getting away from the idea that we’re a media company that runs a television network, radio stations, a series of digital platforms and really starting to see each of those distribution channels all coming from the same multimedia powerhouse.”

Maich said Rogers Media looks to reach its audiences on the screen that makes the most sense for their lives, exactly at the moment they’re looking for inspiration, entertainment, or service. “If we do that effectively, and use our marketing dollars well, we will continue to scale our audiences. And that’ll put us in a position to deliver even more dynamic content experiences, but also a much more effective advertising experience for our clients.” 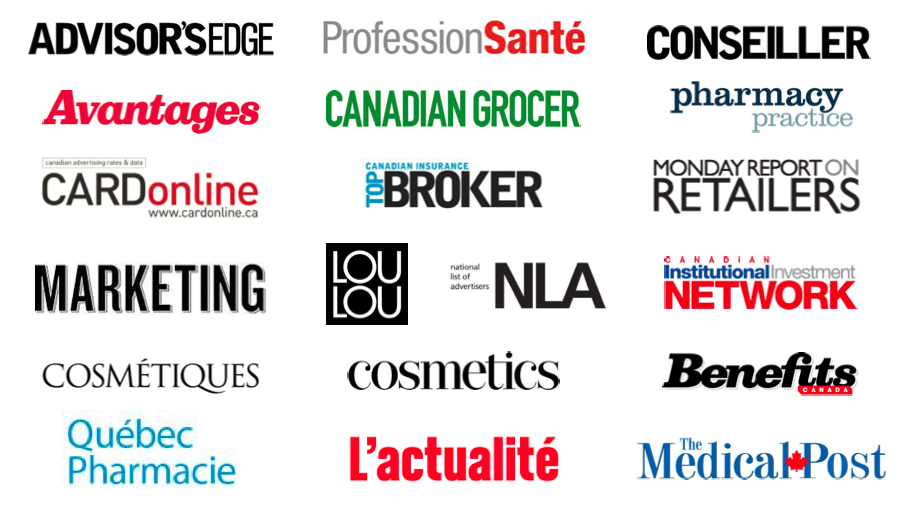 Over the last couple of months, Rogers Media set new consecutive months of record highs in terms of their digital audience. Maich said they’ve seen robust growth in unique visitors, but also pageviews, video starts and impressions. “We’re growing really strongly across the board and exceeding our targets, and that includes our revenue and budget targets as well,” he said.

Among the first lessons Maich shared was this: assume the worst. The industry fell into the habit of ignoring big trends and grasping pieces of micro-data that made them feel better about what they’ve always done, he explained. “We fell into the trap of saying ‘there are millions of Canadians who still love magazines,’ yes, that’s true and that’s beside the point. The problem, from my perspective is, is that they really blunt the sense of urgency around the need for change,” he said.

Maich said, if your audience is telling you year by year that that is less relevant to their lives, you have to change or else you’re committing yourself to a path that leads to irrelevancy.

For magazine publishers looking to transform their business, make a bet where the opportunities lie, and decide which product will become secondary. 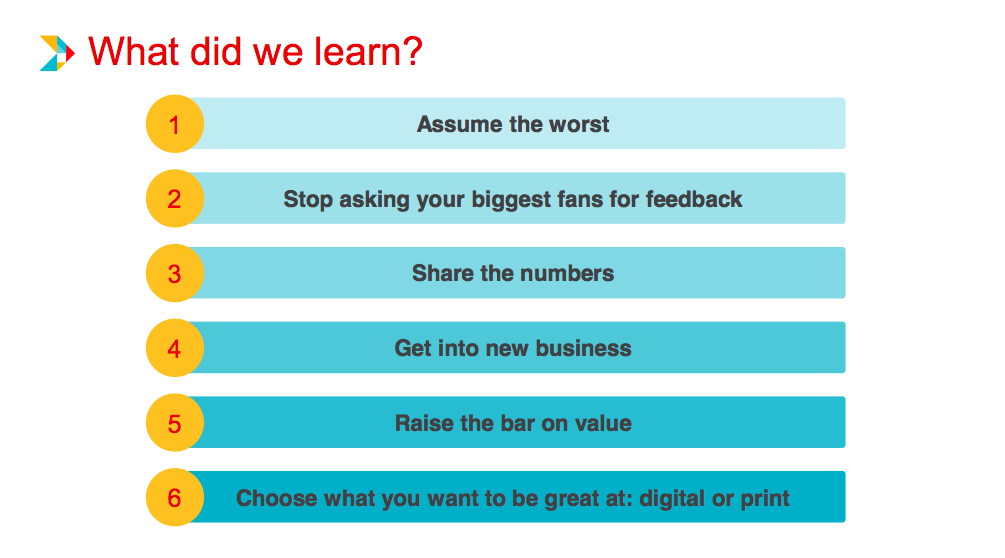 “My favourite analogy for the longest time was we were navigating between two elevators,” Maich said. “One of them was gradually coming down, that was the print elevator, and one of them was rising, that was the digital elevator. You’ve got to time your jump right. You know you’re going to jump from one to the other. But if you jump too soon, the fall can kill you. And if you wait too long, the opportunity will pass you by and you’ll ride the print elevator to the bottom.

“What I came to discover is that you can’t control or in some cases, predict the speed of each elevator… It becomes incredibly difficult and at some point you just have to make that jump. Even though it’s going to be uncomfortable and the landing isn’t necessarily going to be soft.”

***Meet Steve at the 41st FIPP World Congress from 9-11 October 2017 in London, which he will attend as one of a line-up of 80+ speakers from around the world. Discounted, early bird registrations are currently available***